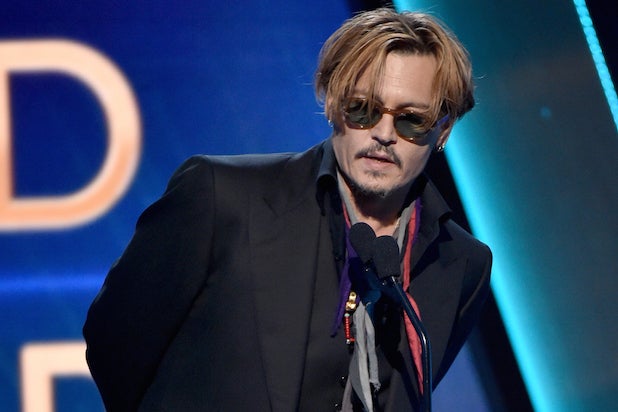 So now that the Hollywood Film Awards have been thoroughly mocked, tanked in the ratings and made presenter Johnny Depp a subject of rampant hilarity on social media for his on-air ramble – can we talk?

Another red carpet. Another set of statues. A new round of thanking God, parents, agents and lawyers. Another new step on the now-endless road to Oscar. At what point is Hollywood going to ask itself the obvious question: When are all these awards shows too much of a good thing?

I groaned audibly last year when I heard that CBS was going to air the Hollywood Film Awards. But that was personal, because it meant another awards show for TheWrap to cover, regardless of its legitimacy: Hey, it’s on TV. (More on this later.)

But that’s not the issue. It’s time to wonder whether the Hollywood establishment has any sense of self-preservation when it comes to the credibility of its own awards franchise, the Academy Awards.

The Hollywood Film Awards joins a litany of on-air awards shows that create an endless parade of delighted and honored movie stars who – by the time the Academy Awards roll around – have spent far too much time rehearsing their Oscar speeches in our living rooms.

From November to the end of February, Eddie Redmayne will be moved to the core, again and again. Michael Keaton will run out of words to describe how honored he feels. Matthew McConaughey, who made roughly 800 acceptance speeches a year ago, will have to come up with new ways to lead up to “alright alright alright.”

By February 22 we’ll be rolling our eyes, and those Oscar moments that might otherwise seem genuine will play like last last month’s news.

Sure, it makes money for somebody, though the anemic ratings suggest that CBS will be hard-pressed to earn much from this mess. And it allows studios to remind us that their movies are awards-worthy.

But it also wears out a public that can get fed up with Hollywood’s penchant for dispensing shiny objects, and it saps the Oscars of their sense of being something special.

We all know the ratings have been in decline in recent years, and adding more awards shows is not going to coax more people into watching.

Seeing Johnny Depp slur his way through a half-hearted award presentation does not make for the kind of entertainment Hollywood should want. It makes a mockery of stardom and confuses people: Is this a real awards show, or one of those fake ones?

Many readers here know I’ve spent years questioning the credibility of the Golden Globe awards and its 80-something voters – largely because it’s on NBC and the public presumes it has legitimacy. And now here we have another set of awards handed out by a self-ordained group that on top of everything else is anonymous.

I’m told there are 12 of them. Twelve. It’s an open secret around town that the quality of the work goes into the advisory team’s choices – but it might not be as important as the promise to attend, and the delivery of a big star to present the award.

(Did “Supermensch” win the award as the year’s best documentary because the group really believes it’s better than “Citizenfour” or “Life Itself,” or because it could trot out Depp to present the award to Mike Myers? Just asking.)

The metastasizing of awards shows has created a well-earned cynicism among the media and an increasingly savvy public. This just in from Mark Lisanti on Grantland, who commented on the Hollywood Film Awards while wondering what the hell they were:

Driving this process is network greed for more advertiser dollars and greed by Oscar marketers to have yet another platform to endlessly promote.