Despite the recent success of Patty Jenkins, Greta Gerwig and Ava DuVernay, a new analysis by TheWrap has found that only 3.3 percent of the films scheduled for release this year by the six major Hollywood studios have a female director — the lowest percentage in at least five years.

Worse yet, fully half of the majors — Paramount, Sony and Warner Bros. — have only men directing all of their 2018 releases.

The three remaining legacy film companies have just one film each with a female filmmaker: Ava DuVernay’s “A Wrinkle in Time” at Disney, Jennifer Yuh Nelson’s “The Darkest Minds” at Fox and Kay Cannon’s comedy “Blockers” at Universal.

A Paramount spokesperson acknowledged this year’s all-male slate but said that studio CEO Jim Gianopulos, who started last spring, is prioritizing projects with female directors for 2019 and 2020. Disney and Sony declined to comment but did not dispute the figures on their release slates. Universal, Warner Bros. and Fox did not respond to requests.

Also Read: Ellen Pompeo on Gender Pay Gap: Women Should 'Point the Finger at Ourselves' (Video) 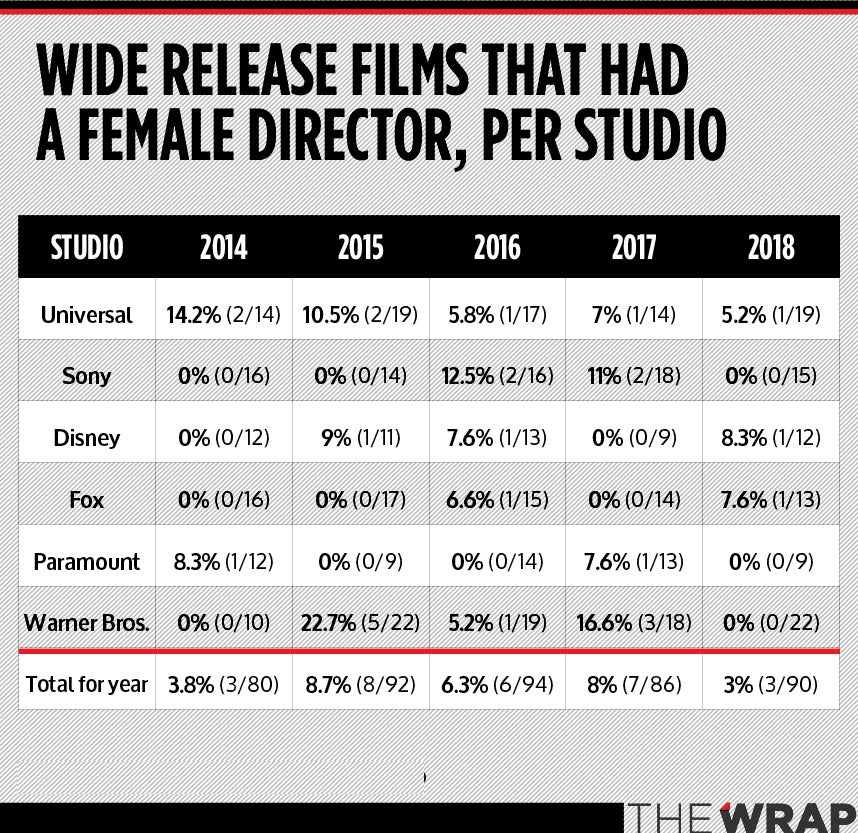 From 2014 to 2017, 24 of the 382 wide-release films released by the six major studios had female directors — for a rate of 6.3 percent. Neither the raw number of female directors nor the percentage has managed to crack into double digits despite renewed focus on gender disparity in Hollywood.

The dim outlook for 2018 films also comes as female directors have scored notable successes in the last year. Patty Jenkins’ “Wonder Woman” earned $412.5 million to become the third-highest grossing domestic release of 2017, and “Lady Bird” director Greta Gerwig became only the fifth woman ever to earn an Oscar nomination for Best Director.

The prospects do look brighter on the major studio slates in 2019, where nine films directed by women are currently scheduled for release. These films include sequels to major box office hits, summer blockbusters and franchise installments.

For this survey, TheWrap did not consider releases from art-house divisions like Fox Searchlight and Sony Pictures Classics, which often rely on acquisitions as opposed to developing projects in-house and hiring the filmmakers involved.

Here’s a breakdown of the gender disparity for directors, by studio.

Even though “Wonder Woman” was the toast of Hollywood last year during a very rough summer blockbuster season, Warner Bros. only has one film from a female director on its slate for the next two years. That film, of course, is next year’s “Wonder Woman 2,” which will see Patty Jenkins return to direct.

It’s quite a step back for Warner, which released nine films by female filmmakers over the past three years.

Looking forward, Warner’s New Line label  signed “Straight Outta Compton” co-writer Andrea Berloff last year to direct an adaptation of “The Kitchen,” Vertigo’s comic book miniseries about the wives of Irish mobsters who take over when their husbands are arrested. Melissa McCarthy and Tiffany Haddish have signed on to star in the film, which doesn’t yet have a release date.

Paramount has released only one film directed by a woman in the last three years: last year’s documentary “An Inconvenient Sequel: Truth to Power,” which was co-directed by Bonni Cohen and Jon Shenk.

And none of the studio’s nine slated features this year has a female filmmaker either.

However, Paramount has slated Reed Moreno’s action film “Rhythm Section” for February 22, 2019, a release date that so far remains unchanged despite an injury sustained by its lead star, Blake Lively, that has delayed production.

A Paramount spokesperson told TheWrap that Gianopulos has pushed the studio to create more projects with women directors and that it is considering several priority projects by women for its 2019 and 2020 slates.

Though Sony does not currently have a woman’s film slated for release this year, it leads all Hollywood studios with six films planned for release over the next three years. Before MacLaren makes “Cowboy Ninja Viking” for Universal, she will make her feature film directorial debut with an adaptation of Kristin Hannah’s WWII novel “The Nightingale,” which  TriStar plans to release early next year.

Gina Prince-Bythewood will become the first black woman to direct a superhero movie with the “Spider-Man” spinoff “Silver and Black,” which is currently in preproduction. Elizabeth Banks will also bring back “Charlie’s Angels” with a new trio of actresses. That film is scheduled for a June 2019 release.

Sony has also signed Catherine Hardwicke to direct a remake of the Oscar-nominated Mexican drama “Miss Bala,” which just received a January 2019 release date. Alethea Jones is signed to direct Anne Hathaway in the “Barbie” movie, which aims to put a feminist spin the famed Mattel doll, and is slated for 2020 release. Finally, TriStar has signed on Marielle Heller to direct Tom Hanks in the Mister Rogers biopic “You Are My Friend.”

The studio’s indie wing, Sony Pictures Classics, has acquired at least two films from female directors: Chloe Zhao’s Spirit Award-nominated “The Rider,” and Shana Feste’s road-trip drama “Boundaries,” both of which will hit theaters in the next three months.

Though Stacey Snider has served as Co-Chairman of Fox since 2014 and Chairman and CEO since last June, there is only one film on the studio’s upcoming slate being directed by a woman: “The Darkest Minds,” an adaptation of Alexandra Bracken’s YA novel that will be the live-action directorial debut of Jennifer Yuh Nelson, who directed the “Kung Fu Panda” sequels, which comes out this June

The studio has had at least two other projects in development with female directors but neither cast attached or release dates: “Fire Me,” a comedy to be directed by TV vet Ryan Case, and an adaptation of the comic book series “Lumberjanes,” which will be directed by Emily Carmichael. Both were cited in last March’s report on gender balance on Fox’s slate.

Over at Fox Searchlight, which released two films directed by women last year, Marielle Heller’s “Can You Ever Forgive Me?” is still on course for release this August.

After releasing DuVernay’s “A Wrinkle in Time” this month, the lone female-directed title on its 2018 slate, Disney will release two films directed by women in 2019. The first will be “Captain Marvel,” which is being co-directed by “Mississippi Grind” filmmakers Anna Boden and Ryan Fleck. Then, Jennifer Lee will return to direct the November 2019 sequel to “Frozen” with Chris Buck.

The studio almost had another female director this year — until it announced this week that Niki Caro’s live-action remake of “Mulan” had been pushed back from this November to March 2020.

Disney is also moving forward on two book adaptations: Thea Sharrock (“Me Before You”) is tackling K.A. Applegate’s “The One and Only Ivan,” an unslated project which will star Bryan Cranston and Angelina Jolie, while Julia Hart recently signed on to direct a version of Jerry Spinelli’s “Stargirl.”

The Comcast studio currently has three films by women coming out in the next two years. The first, Kay Cannon’s teen sex comedy “Blockers,” will premiere at SXSW this month in advance of an April release.

Meanwhile, the studio’s art-house division, Focus Features, has two female-directed historical dramas on its 2018 slate. Josie Rourke’s “Mary Queen of Scots,” which stars Oscar nominees Saoirse Ronan and Margot Robbie as Mary and Queen Elizabeth I,  is due out in November. Mimi Leder’s “On the Basis of Sex,” which stars Felicity Jones as Supreme Court Justice Ruth Bader Ginsburg, will come out this year but has no specified release date.