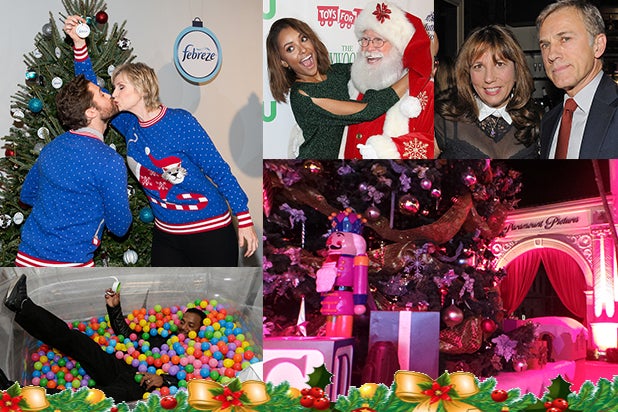 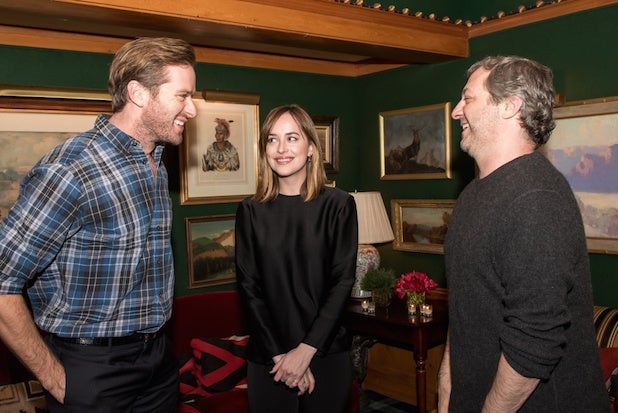 Chris Council/Getty Images for Audi
Armie Hammer, Dakota Johnson, and Judd Apatow headed for Aspen on December 19, meeting up at the Caribou Club for Audi's holiday party after snow polo earlier in the day. 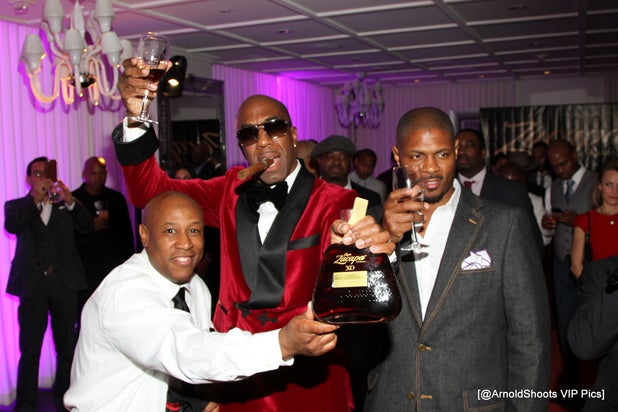 @ArnoldShoots VIP Pics
J.B. Smoove smartly waited until Hollywood logged off for the year to throw himself a rowdy, rocking 50th birthday bash at the SLS on Saturday night, December 19.  There were choreographed dances (via Farnsworth Bentley), '90s rappers, "Mama Smoove" getting out of a wheelchair to dance with her son, and casino gambling.

@ArnoldShoots VIP Pics
Sherri Shepherd told Fran Drescher (pictured) that doing "Dancing with the Stars" was one of the best moves she ever made and told her to consider it. Fran signed in with a giant version of the Cross pen that VIPs went home with.

@ArnoldShoots VIP Pics
'You better be working on a new season of 'Curb Your Enthusiasm' because all this s--t costs money," Smoove told Larry David from the stage.  "I am working on a season...but I wrote you out in episode two," David cracked back. David also left a funny welcome message on the sign in board.

Getty Images
Maria Sharapova gathered her friends around the tennis court, not the Christmas tree, at the first "Maria Sharapova and Friends" tennis event at UCLA on December 12-13. Sharapova and Chelsea Handler wiped Will Arnett and former world #1 Andy Roddick off the court without losing a game.

Getty Images
Chelsea Handler - surprisingly not bad at all. Porsche and WMEIMG put on the sophisticated wine-and-cheese style event, bringing professional tennis back to L.A. for the first time in years.

Getty Images
"Does anyone have the gate code?" Will Arnett joked after losing the first game and attempting to drive the new 2017 Porsche 911 Carrera off the court.

Getty Images
Host Sharapova made a last second change by trading Will Arnett for Handler to convert Saturday afternoon's last match in to a "Battle of the Sexes".

Porsche
Earlier in the day, Sharapova took the court with Kei Nishikori and faced off in singles against rising American star Madison Keyes.

Mikey Glazer
Untitled's Jason Newman welcomed Orlando Jones (center) to a launch party at the Darkroom on Melrose for the OnCam app, a video calling platform that allows for monetization of online meet-ups.

Courtesy of AAFCA
The original "Creed", Carl Weathers, with members of the DGA’s African American Steering Committee at the multi-organization "Holiday Soul" Party at UTA on December 17.

Jason Kempin/Getty Images Delta Air Lines
Shay Mitchell jetted in for Delta's "Holiday In The Hanger", a gathering for Children's Hospital Los Angeles and P.S. Arts at LAX on December 2.

Jason Merritt/Getty Images
Michael Shannon and Kate Arrington jumpstarted the laughs on the red carpet for the premiere of “The Night Before”.  The gear is from “Shark Tank” fave Tipsy Elves.

Angela Weiss/Getty Images for The Creative Coalition
Evan Handler and Christoph Waltz made a holiday huddle with Creative Coalition CEO Robin Bronk at the non-partisan, non-profit's holiday dinner party at One West on Saturday night, Dec. 5.

Angela Weiss/Getty Images for The Creative Coalition
The Creative Coalition steaks, wine, and holiday dinner staples doubled as an awareness dinner for D.C. Statehood. Tough guy Jonathan Banks (right) added muscle to Senator Paul Strauss' campaign to put a 51st star on the flag (and 2 more Senators in the north chamber of the Capitol).

Angela Weiss/Getty Images for The Creative Coalition
One West is The One Group's old STK on La Cienega in the heart of West Hollywood. STK recently decamped for quieter Westwood. The dress was "holiday cocktail" which for Bruce Vilanch means...

Angela Weiss/Getty Images for The Creative Coalition
...this. Never a disappointment.

Angela Weiss/Getty Images for The Creative Coalition
Hal Sparks is a Creative Coalition regular, and had some strong feelings about the end of "The Soup," the E! series he once hosted. "Twin Peaks" star Madchen Amick, Cassie Scerbo, Quinton Aaron, and reliable party enhancer Tichina Arnold all joined Bronk for the dinner that also benefitted the DC Film Office.

Tiffany Rose/Getty Images
Ricky Schroeder would have had a giant inflatable duck pool filled with balls in his house on "Silver Spoons". Alfonso Ribeiro took a dive at Bill Horn and Scout Masterson's "Santa's Secret Workshop" on Saturday, December 5.

Tiffany Rose/Getty Images
Tori Spelling is a regular at this event thrown by her pals "The Guncles" at the Andaz on Sunset. The invite tells guests to come ready to snap their holiday card photos, like this one.

Tiffany Rose/Getty Images
No mistletoe, no problem. Dot-Marie Jones goes in for a smooch on one of Santa's furry little helpers backstage at the Staples Center in the Sabra Hummus Station during the Jingle Ball concert on December 4.

Todd Williamson
Kato Kaelin, Larry King, and Shawn King at the Arclight premiere of “Christmas Eve”.  King and Kato are pals going back to the O.J. days when King’s nightly ratings were “through the roof” King recalled to TheWrap.

Todd Williamson
Larry King produced the movie starring Patrick Stewart and Jon Heder (pictured) along with King's wife, Shawn King, and Cheryl Hines.  Stewart is currently playing an amplified version of a Larry King-type on “Blunt Talk” and Larry called @SirPatStew personally to get him onboard this film.

Todd Williamson
Cheryl Hines and James Roday also star in the movie about different groups of people trapped in an elevator on the night before Christmas. They all flew to Romania to shoot the film that seems like it could have been shot in the Arclight itself. It’s in theaters and on VOD as of Dec. 4.