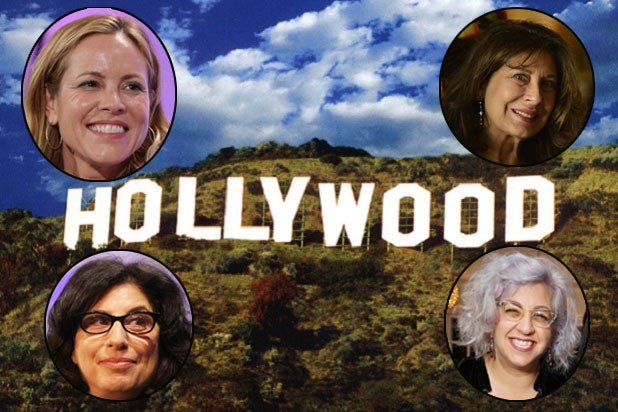 Dozens of ranking executives, agents, writers, directors and talent gathered for a secret two-day conference in October to formulate a plan for Hollywood’s gender equality crisis.

The result, which was revealed Tuesday, was a four-part plan to help balance the scales for women in Hollywood. Measures include: an “unconscious bias” educator to work with companies on developing content that represents everyone, a “gender parity stamp” that scores and approves content as balanced, a mentoring program for entry-to-mid-level females in the industry and an ambassador program to continue dialogues within studios and networks.

The summit’s agenda was to “drill into the systemic causes of gender bias in the industry and craft solutions,” a spokesperson said in a statement. The conference, dubbed “The Systemic Change Project: Moving the Needle for Women In Hollywood,” was led by Carolyn Buck Luce and Rob Evans of Imaginal Labs.

Luce and Evans have counseled companies like Google and Goldman Sachs on the advancement of women in the workplace.

Public attention on gender inequality in Hollywood has elevated the issue to a level of crisis within the industry, even as inequality persists. In 2013 and 2014 only 1.9 percent of the directors of the 100 top-grossing films were women, one of many depressing statistics that illustrate the issue.

“With perspective from opening Sundance’s records for four years of landmark research that examines the barriers facing women in film, the time is right to gather industry leadership and start to address these obstacles,” Sundance Institute Executive Director Keri Putnam said.

“We are at an economic, social and cultural tipping point and sustainable change is within reach. The time to act is now. Hollywood is surprisingly late in coming to this party and this is the time for conversion,” WIF president Cathy Schulman continued

The plan is listed as follows:

Advocate ‘Unconscious Bias’ training across the industry. Leaders in other businesses have determined that unconscious bias creates blind spots and leads to missed market opportunities, and also hinders access to valuable consumer segments limiting profits. Creating more content for women and people of color is not only about equality; it also makes good business sense. An expert Unconscious Bias educator will be selected to work with executives and creatives across the industry.

Develop and launch a Gender Parity Stamp to recognize films and television shows — as well as production companies, networks and studios — that show measurable progress to achieving gender equity. Mirrored on the successful work by LGBT advocates and the PGA’s producer mark, this recognition for positive progress will be a visible identifier for companies that have prioritized equal gender hiring practice and have financed or supported business opportunities for women in front of and behind the camera.

Sponsor/Protégé Program. This high-level pilot program will identify talented early-to-mid career female film and TV directors for a year-long training and fellowship program, and pair them with advocates across the industry who will actively help them move to the next level. While many individual companies have training programs, this unique program will enable the protégé to work across different networks, studios and agencies. With the support and participation of executives across the industry, this program will highlight women selected by a panel of leaders and assure they have the tools, relationships, and exposure to launch and sustain their careers.

Ambassadors from the industry leaders at the meeting will spread the word about the solutions to studios, networks and agencies. Crucially, the participants have committed to staying involved in the project and will enlist an ever-growing group of advocates to work inside their organizations on articulating the business case for making changes in culture and practices to hire more women and people of color.

Jenji Kohan
Creator of WEEDS, ORANGE IS THE NEW BLACK

Franklin Leonard
Founder of The Black List, former executive at Universal and at the production companies of Will Smith, Sydney Pollack and Anthony Minghella, Leonardo DiCaprio, and John Goldwyn

Glen Mazzara
Creator and showrunner of DAMIEN, Executive Producer of THE WALKING DEAD and THE SHIELD and co-chair of the WGA’s Diversity Advisory Group

Robin Swicord
Screenwriter of LITTLE WOMEN, THE CURIOUS CASE OF BENJAMIN BUTTON, JANE AUSTEN BOOK
CLUB, MEMOIRS OF A GEISHA, Governor for the Writers Branch of the Academy and Chair of the Nicholl Fellowship

Says producer Dana Calvo: “The worst fear of men in Hollywood is that there’s going to be crying… And if there’s sex, what if there’s crying after sex?”