To promote “Harry Potter and the Half Blood Prince,” Warner Bros and Google invited "Harry Potter" fans to hold up a drawing of a cauldron in front of the computer.

Your webcam scanned the drawing and turned it into a 3-D image that you then used in creating your own video about Harry and his pals. Once uploaded to YouTube, you could have been part of a “Harry Potter” contest.

The innovative campaign — called the “Advanced Potion Making Experience” contest (see it here) — is the latest in a new marketing alliance between Hollywood and Google aimed at the all-important “engagement” of movie fans and online users.

It’s unclear how well the fledgling effort is working, since only 27 people made videos worth considering for the contest, according to Google. Warner’s "Harry Potter" channel on YouTube has attracted 348,000 channel views since its debut in June. (The movie opens on Wednesday.)

However modest by web standards, the initiative is nonetheless the start of what is likely to become a growing marketing effort that combines Hollywood’s creativity with the techical capacity of the web.

“These types of programs allow people, who are for instance interested in ‘Harry Potter,’ to engage with the content in a more meaningful way," said Adam Stewart, Google’s entertainment industry director. "The more engaged you are with the content, the more interested you are in actually seeing the movie and going when it opens.”

In other recent examples of online marketing, YouTube offered a channel for Fox’s “I Love You Beth Cooper.” The movie is about a high school student who professes his love for a fellow classmate, and the YouTube channel invites viewers to share a confession on the site.

The rise of “online engagement” ads for movies comes on the backdrop of rising trend toward marketing online overall.

A five-year forecast released last week by Forrester Research predicts continued growth in interactive marketing, a figure that will approach $55 billion and account for 21% of all marketing spend come 2014. 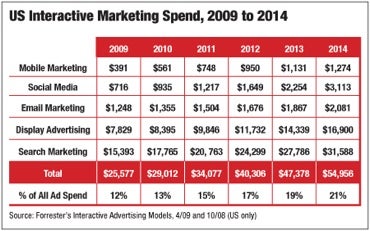 “TV audiences are distributed across hundreds of channels and people are more distracted," said Shar VanBoskirk, author of the Forrester study. "It is forcing heavy TV advertisers to rethink what they do. The result is that there is a lot of experimentation in the use of interactive channels.”

VanBoskirk noted that these campaigns are far less expensive than traditional advertising. “The tools we are talking about can be 1/10 the cost of a TV campaign,” she said.

Many of these interactive tools have already become a common part of movie marketing, but the way the pie is divided will continue to change.

“Studios are starting to recognize the impact of digital marketing on tracking,” Stewart said.

With that in mind, the involvement of creative teams is perhaps more important than ever as studios seek new ways to attract — and keep — audiences as they are increasing distracted with more online content.

In the case of the latest "Harry Potter," social networking sites Facebook and Twitter have been involving fans for months, directing them to online video clips and trailers, premiere photos, and information including interviews and theater listings.

Online trailers and clips are available at popular destinations including Yahoo, MSN and YouTube. Search engines can help to direct online traffic.

The Harry Potter Youtube channel offers TV advertisements and other video clips aimed at exciting fans about the upcoming movie, with the contest a centerpiece where users are invited to ‘brew’ their own potions, and introduce their creations by making a YouTube video.

Warner Bros declined to speak about the initiative.

YouTube and its parent Google — which worked with Warners on this campaign —handled online marketing and advertising for the Potter channel and contest. That included running display ads for a couple of days on the YouTube home page, which generates an estimated 30 million views per day. Google also used its search engine to help drive traffic.

Earlier this year Universal’s “Fast & Furious” had a display ad on YouTube’s home page that included access to behind the scenes video clips as well as a game.

Another recent example of display advertising from YouTube’s home page includes Lionsgate’s “The Haunting in Connecticut,” which ran earlier this year and included links to the trailer and theater listings, as well as the ability to download an iPhone application.

Such examples, coupled with the Forrester findings, suggest where the area is heading.

While the report is not divided by industry, VanBoskirk told TheWrap that media and entertainment — not surprisingly — has taken a leading role in the use of social networking, with the instant word of month offered by Twitter being an obvious example. (See Studios Wrestle With ‘Twitter Effect’).

She added that Hollywood has also leapfrogged all other industries in the use of online video as a marketing tool.

Showtime has already used YouTube, as well as other key sites such as MSN and Yahoo, to make the pilot episodes of its new series available, prior to the broadcast premiere.

“Nothing sells a show better than the show itself,” said Showtime Vice President Stuart Zakim.

The pilot of “Nurse Jackie” "was our biggest premiere of a new show in Showtime’s history,” Zakim said.

“We have been aggressive about using a pilot as a marketing tool,” he said. “As a way to expose non-Showtime subscribers to the programs, it is very effective.”

Prior to “Nurse Jackie,” Showtime found success offering online pilots of series including “The Tudors” and “United States of Tara" at destinations including the YouTube home page.