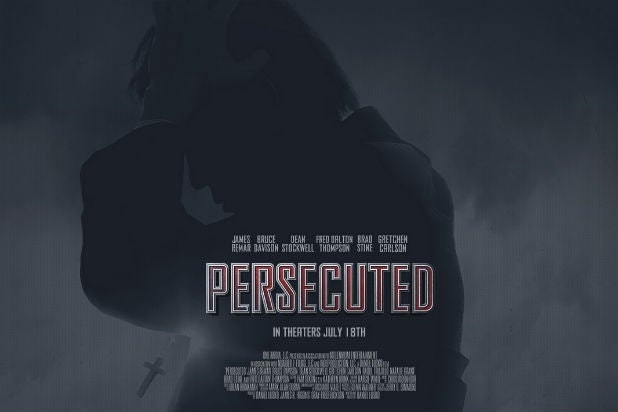 This summer, my movie “Persecuted” will be released on 600 screens nationwide. Unlike “Son of God,” “Noah” or “Moses,” there are no Bible robes in Persecuted, but my story — about a Televangelist turned fugitive, who refuses to support legislation favored by the political establishment — touches on religion and the values that millions of Americas hold dear.

I have received feedback from some questioning how the Catholic priest that Fred Thompson plays can have a son (hint: he had a past before entering the priesthood), while others have raised eyebrows at the very notion of religious persecution in the U.S. Some have also expressed concern about what they see as the negative portrayal of the Televangelism “business.”

And if the backlash against Noah regarding the liberties director Darren Aronofsky took with the Biblical source material is any indication, it is truly a difficult task to tell a story that interests – but doesn’t alienate — the faithful.

But, there was a time where it was seemingly easier.

From 1934 to 1968, the Hays Code gave filmmakers valuable insights into the tastes of traditionalist filmgoers. There was also the Protestant Film Office and the Roman Catholic Legion of Decency. But those institutions are long gone, and now — when it comes to understanding the values of the heartland — Hollywood is the wild, wild west, getting them wrong more often than not.

As a young filmmaker, I see a huge challenge in modern filmmaking in terms of finding a balance between being true to one’s vision as a filmmaker while also listening to the input of audiences, especially religious ones, in a country where 79% claim to be Christians. (While nearly half attend religious services each week.) I’m not seeking to duplicate “Noah’s” missteps. I also want to avoid listening to so much religious advice that results in the film becoming faithfully boring.

In my case, to tell the best story possible, I consulted with several prominent faith leaders in the hopes of finding the right balance. Was a particular cuss word really essential to the arc of the story? Was it worth needlessly keeping large numbers of religious viewers away from my film if it didn’t add anything? Could I be critical of a particular aspect of Televangelism without alienating those who were ministered to by TV preachers? Those were questions I wrestled with, as the success of “Son of God” and the challenges faced by Noah played out in my mind.

Things may have been easier in the old days, when the Hays Code approved of scripts, but as a filmmaker – that process is not necessarily one I want to revisit. Rather, I prefer the progressive process I undertook with “Persecuted.”

I made the film I wanted to make, but listened carefully to those religious leaders who represent the vast heartland that I want my story to resonate with — and very soon they’ll render their verdict as to whether or not I have succeeded.

BIO TheWrap Staff
Daniel Lusko is the writer-director of "Persecuted", which opens nationwide on 600 screens July 18, 2014. Lusko attended film school at the New York Film Academy and directed the documentaries "Inside The Revolution," "Epicenter" and "Never Surrender" -- a film which chronicled the true origins of Delta Force. In the past two years, Lusko directed his first action-adventure feature film, "500 MPS Storm," and a gritty crime drama, "11 Seconds"

Daniel Lusko is the writer-director of "Persecuted", which opens nationwide on 600 screens July 18, 2014. Lusko attended film school at the New York Film Academy and directed the documentaries "Inside The Revolution," "Epicenter" and "Never Surrender" -- a film which chronicled the true origins of Delta Force. In the past two years, Lusko directed his first action-adventure feature film, "500 MPS Storm," and a gritty crime drama, "11 Seconds"