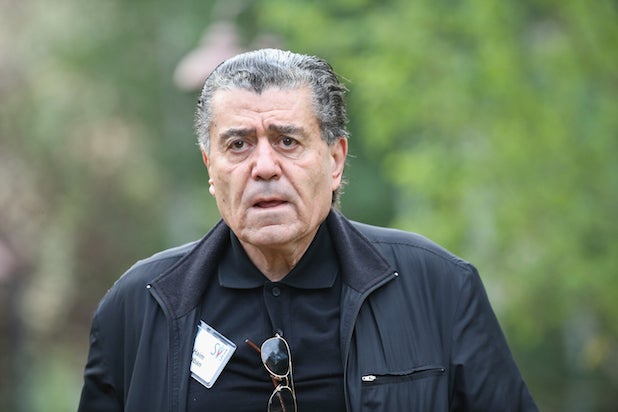 Media mogul Haim Saban, one of Hillary Clinton’s biggest backers in Hollywood, said that the U.S. should step up its scrutiny of Muslims in the wake of the deadly ISIS attacks in Paris.

In a broad-ranging conversation about his support for the former secretary of state, the 71-year-old Israeli-American businessman and philanthropist said that some civil liberties may need to be suspended in times of war.

“I’m not suggesting we put Muslims through some kind of a torture room to get them to admit that they are or they’re not terrorists,” he told TheWrap. “But I am saying we should have more scrutiny.”

TheWrap spoke to Saban about his support for the Democratic presidential frontrunner — he and and his wife, Cheryl, gave $2 million to Priorities USA Action, Clinton’s Super PAC, and hosted a fundraiser in May that netted another $2 million — as well as how the Paris terror attacks could alter the 2016 presidential election as well as civil liberties.

People keep calling the Paris attacks a game-changer. Are they also a game-changer when it comes to the 2016 presidential race?
It’s a wake-up call. I fully believe we’re in a different kind of World War III. What ISIS has proven is that they’re not only active in Syria and Iraq, but they’re active in Europe. We can’t afford the next president, basically the leader of the free world, to be an amateur that has done nothing other than missing votes, or a clown, to be making the decisions as to how to react.

Why do you think Hillary Clinton is the right person for the job?
You need to bring together a coalition of other countries under one tent. For people whom Paris is the Eiffel Tower and not much more, it’s going to be difficult. Hillary knows and has interacted with all these people, she has excellent relationships with all these people, is very respected by all these people and has been in the trenches her whole life. She’s also made of steel. She’s absolutely made of steel and she will take no baloney from no ISIS.

Did she underestimate the instability in the region while she was secretary of state which, some have suggested, led to the birth of ISIS?
The first thing I would say is, the state of the world is not [the way it is] because of climate change [a reference to Bernie Sanders’ claim during the second Democratic debate last week that climate change can lead to terror attacks].

You want someone in the White House that’s not going to tell you, “Ah… if we had a better climate strategy, things would be better.” The other thing to remember is that when the Syrian people started demonstrating in the streets, [Hillary] recommended to President Obama that he arm those people so that they can achieve their goal of democracy. President Obama chose differently, right or wrong, and now we are where we are.

Some critics have said that she’s partly responsible for the ISIS mess because she voted to approve the war on Iraq. Is she?
She did vote to approve the war on Iraq. She said she made a mistake and, frankly, I watched when a very reliable, respected individual such as Colin Powell showed us tubes and semi-trailers and told us this is the beginning of nuclear weapons. It wasn’t just President Bush who said that. It was very respected individuals telling us that on TV to the entire nation. And living with a nuclear Saddam Hussein was not an option. Based on the information we had back then, the vote for the war was the right vote. She apologized, but I don’t think she should have. But that’s easy for me to say. I’m sitting in Beverly Park.

What are people in Hollywood saying about the Paris terror attacks?
Many members of the Hollywood community are very liberal and they value their civil liberties more than they value life. I disagree with that. You want to be free and dead? I’d rather be not free and alive. The reality is that certain things that are unacceptable in times of peace — such as profiling, listening in on anyone and everybody who looks suspicious, or interviewing Muslims in a more intense way than interviewing Christian refugees —  is all acceptable [during war]. Why? Because we value life more than our civil liberties and it’s temporary until the problem goes away.

But to say this is shameful — I disagree. [ISIS] said, ‘We’re going to Paris,’ and they went to Paris. They’re saying they’re now going to Washington. Watch out, they might. I’m not suggesting we put Muslims through some kind of a torture room to get them to admit that they are or they’re not terrorists. But I am saying we should have more scrutiny.

Do you think Hillary Clinton should change her position on allowing more Syrian refugees into the U.S. in the aftermath of the attacks in Paris?
I’m not in a position to tell you whether 10,000 or 65,000 or half a million is the right number. I don’t have an opinion on that. But I do have an opinion on the scrutiny. Scrutinize every single individual. There is no data available from Syria. The country is completely in turmoil. It’s all a judgment call of the person conducting the interview. So it’s too dangerous.

Do you think the Paris attack will inadvertently help Hillary Clinton now that foreign affairs has become such a focal point in the campaign?
I do think it will help because she’s the only one with the resume and the most qualified to deal with this.