Protesters and rioters are not one and the same. And civil unrest can be civil. I saw it for myself, as I was in the thick of a march of hundreds through Hollywood, protesting police brutality and the killing of George Floyd by a Minneapolis officer.

Despite being surrounded by hundreds marching east as I was in my car heading west, anger, unruliness and violence was not in the air. No rioting or looting or otherwise unacceptable (and illegal) behavior to be captured by news crews. Just a feeling of people of all colors uniting to peacefully make a point.

Here’s what I saw. 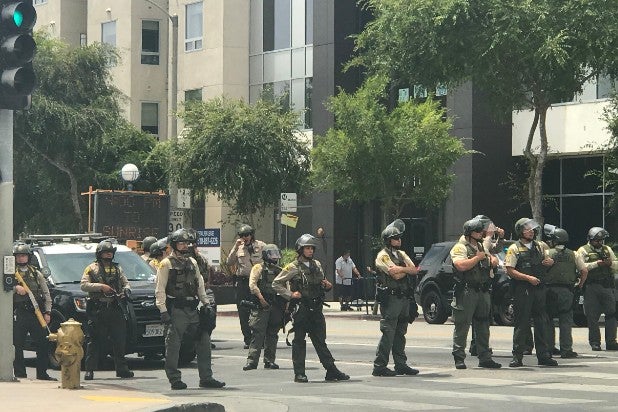 In the midst of the traffic, passengers get out of cars to join the march.

Cars are honking in a cacophony of noise. Who can tell if it is in support of the protest or because the intersection is blocked?

One black-clad masked person holds up a black sign: “The world is ending. I’m done pretendin’ Nd F— U if get Offended.” 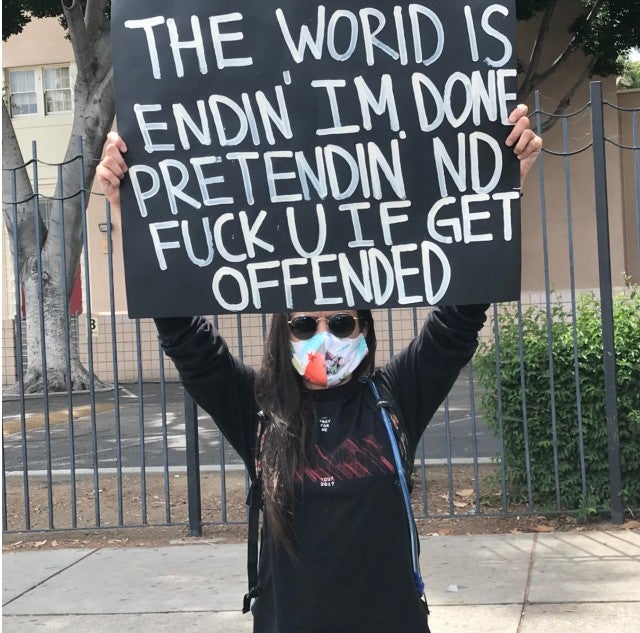 After pouring down Sunset Boulevard, they make a couple of turns and march down an adjacent street. 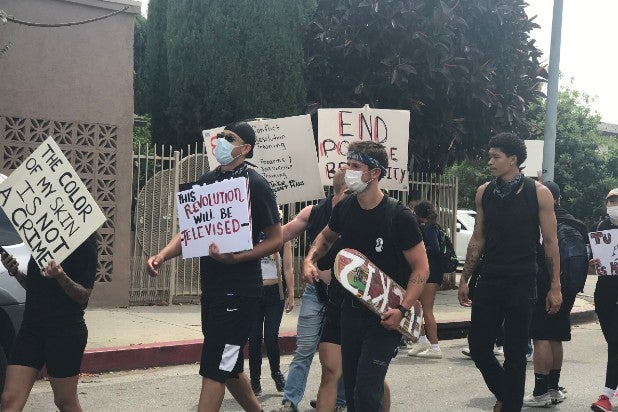 The marchers have come back to the streets of Los Angeles, and they have a message: “The color of my skin is not a crime.”

The crowd is chanting: “No Justice! No peace!” 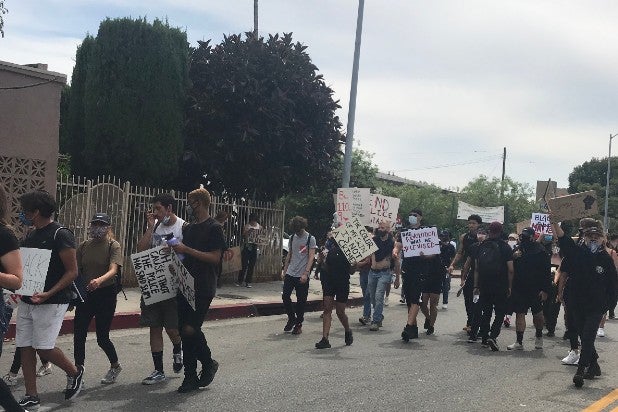 Hundreds marching, arms raised high in the air, heading east into the heart of the entertainment industry’s most famous neighborhood.

They’re young, and only about a third of them are black. Nearly all are wearing masks. 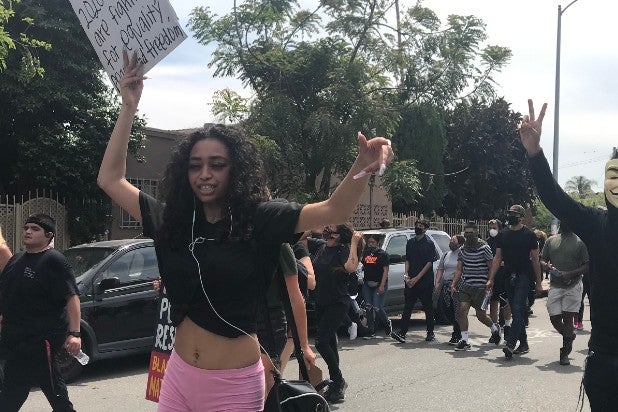 “I’ll Never Understand But I Stand With You,” says one sign — homemade on cardboard, a message scrawled in marker. 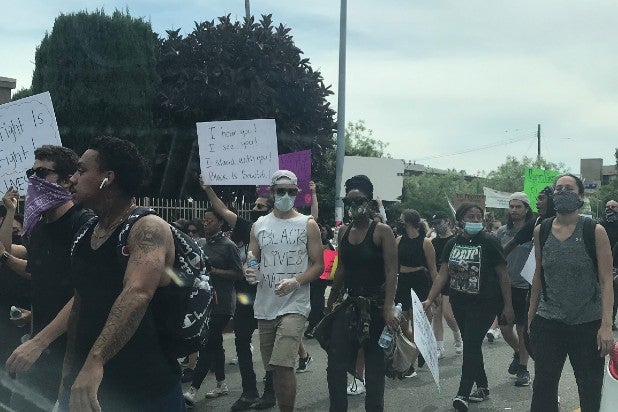 And more:
“Silence is Betrayal.”
“Justice and Peace”
“If You’re Not Livid You’re Dead” 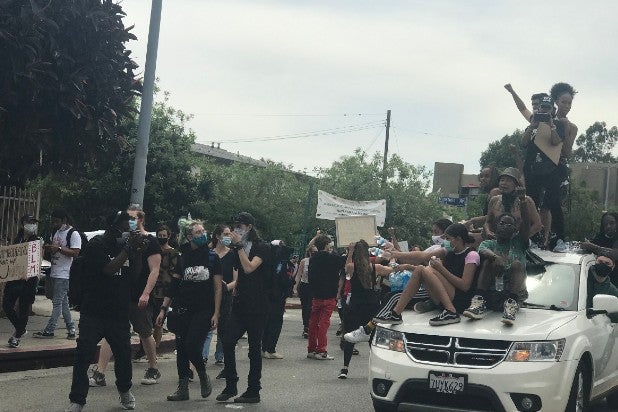 A sign reads: “If you are neutral in moments of injustice, you have chosen the side of the oppressor!” 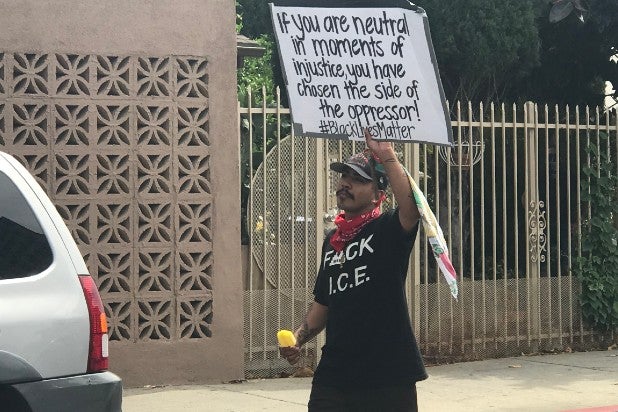 There’s not a pedestrian in sight on Hollywood Boulevard, only army trucks parked curbside… 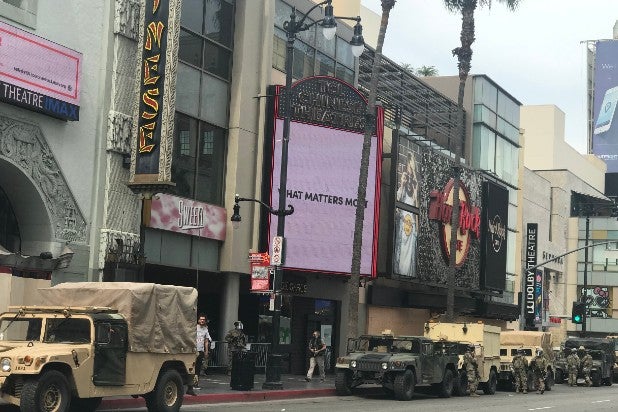 …including in front of the TCL Chinese Theatre. 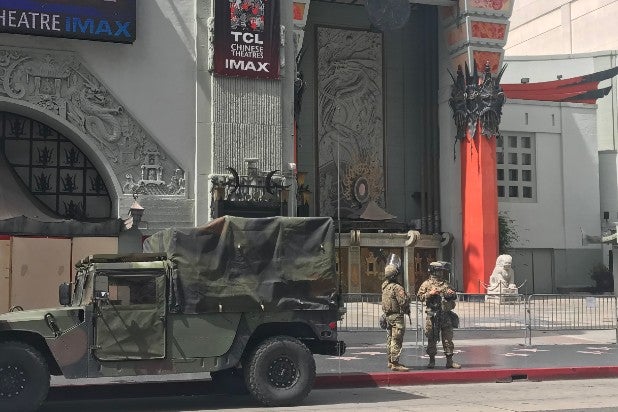 Everywhere, phalanxes of armed police stand in a row, prepared to make a move, should they have to. 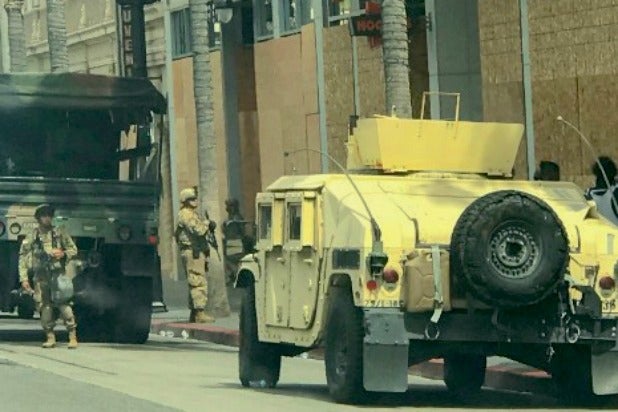 By 3:20, the intersection at Hollywood Boulevard and Highland Avenue was closed.

Not a single peaceful protester marched down the same street where red carpets have been laid down to welcome Oscar hopefuls, where Jimmy Kimmel shoots his late-night show, or past the Hollywood Roosevelt Hotel, where it is rumored that the ghost of Marilyn Monroe can be seen in a mirror in a corridor.