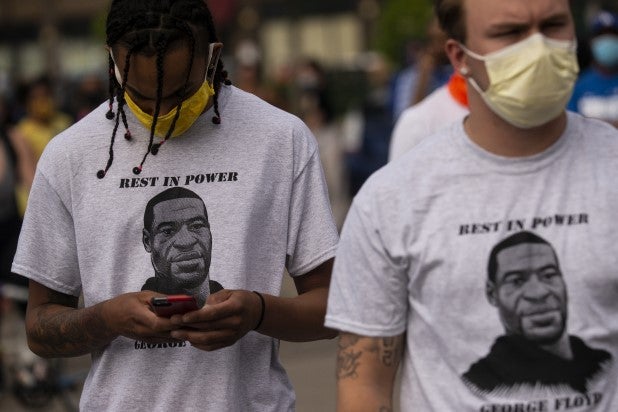 Social media reactions are pouring in on the news Friday that Derek Chauvin, the former Minneapolis police officer involved in the death of George Floyd that has sparked nationwide protests, has been arrested and charged with third-degree murder. Actor, producer, and hip hop legend Ice Cube tweeted, “1 down 4 to go.”

Oprah Winfrey issued a statement on Twitter saying,”I’ve been trying to process what can be said or heard in this moment. I haven’t been able to get the image of the knee on his neck out of my head. It’s there every morning when I rise and when I go through the ordinary duties of the day. While pouring coffee, lacing my shoes, and taking a breath, I think: He doesn’t get to do this. And now the video from the other angle of two other officers pinning him down. My heart sinks even deeper. His family and friends say he was a gentle giant. His death has now shown us he had a giant soul. If the largeness of a soul is determined by its sphere of influence, George Floyd is a Mighty soul. #George Floyd: We speak your name. But this time we will not let your name be just a hashtag. Your spirit is lifted by the cries of all of us who call for justice in your name!”

Floyd died on Monday after Chauvin, a white officer, pinned his knee onto Floyd’s neck for several minutes, even as Floyd repeatedly said, “I can’t breathe.” A bystander captured the incident on camera, which quickly circulated on social media and led to protests across the country that have continued since Wednesday.

Actress Gabrielle Union called out Jill Colvin, White House reporter for The Associated Press, and tweeted, “Jill. Jill. You use words for a living. You know damn well this ain’t it. He slowly, ever so slowly, murdered George Floyd, who he had worked with, all while caught on video as the public pleaded for his life.”

Jill. Jill. You use words for a living. You know damn well this ain't it. He slowly, ever so slowly, murdered George Floyd, who he had worked with, all while caught on video as the public pleaded for his life. https://t.co/3BCO0vXfV7

Singer Ariana Grande tweeted, “A murderer is being held in protective custody.”

a murderer is being held in protective custody. https://t.co/ESHeGdOxlJ

Four of the officers involved in the fatal arrest — Chauvin, Thomas Lane, Tou Thao and J. Alexander Kueng — were fired from the Minneapolis Police Department, Mayor Jacob Frey announced on Tuesday. Floyd’s family has also called for murder charges to be filed against the officers involved.

During a press conference on Friday, Minnesota Gov. Tim Walz said he wanted “swift” justice and noted that the protests were the result of “generations of pain” and “anguish unheard.”

Here are more reactions below:

Derek Chauvin should have been charged with 1st degree murder today.

He suffocated #GeorgeFloyd for EIGHT MINUTES.

That is deliberate and cruel torture.#GeorgeFloyd cried and begged for his mother's help!

3RD DEGREE? This is horribly wrong and should NOT be accepted. https://t.co/VbxN9Q9eci

I wonder if Derek Chauvin and the police officers who murdered George Floyd watched the arrest of CNN reporter Omar Jimenez live from the comfort of their own homes.