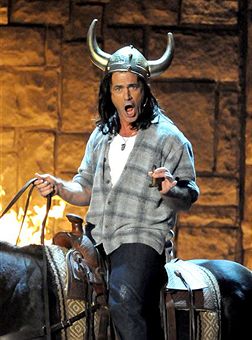 Since the news of Mel Gibson's alleged misogynistic and racist rant broke Thursday, Hollywood has been reacting to the incendiary quotes in Radar Online's story.

Here are a few reactions from celebrities on Twitter and one veteran Hollywood columnist's interesting take on the scandal. As you can see, some comedians had a field day:

Aziz Ansari, star of NBC's "Parks and Recreation": "Damn any celebs trying to get in trouble for saying racist stuff, step your game up. MEL GIBSON IS KILLING IT RIGHT NOW!"

John August, screenwriter, "Charlie and the Chocolate Factory": "Celebrities: have something you need to announce, but would like to sweep under the rug? Today's your day! #thankMelGibson"

Diablo Cody, Oscar-winning screenwriter of "Juno": "This just in: Mel Gibson to perform a tearful tribute to Michael Jackson at next year's BET Awards. #IWish"

Bill Maher, host of HBO's "Real Time with Bill Maher": "New Rule: Mel Gibson has to own being the biggest asshole in the world – there's an audience for that – embrace it, Mel – walk toward the dark"

Paul Provenza, host of Showtime's "The Green Room with Paul Provenza": "Mel Gibson just got into another fight at the Museum of Tolerance."

Jeffrey Wells, columnist, Hollywood-Elsewhere.com: "While I have no sympathy for Gibson and can only feel appalled by his racist broadsides as well as his stupidity in saying anything inflammatory to anyone that he's in a contentious legal battle with, he was clearly sold out, most likely by former girlfriend Oksana Grigorieva or someone acting on her behalf. It's the same kind of thing that happened to Alec Baldwin when someone loyal to Kim Basinger sent out that tape of him yelling at his young daughter. Not everyone loses their temper and says venal stuff that they're sorry about later on, but many of us have — let's face it. Gibson did this to himself, but an ex-lover (or an ally of same) sending out a tape of a private rant is dirty pool."