Thousand Oaks is located 40 miles northwest of Los Angeles in the foothills of the Santa Monica Mountains close to Malibu, where many members of the entertainment industry live. It is a quiet, residential community where violent crime is rare, according to CNN.

“We are on a hamster wheel of insanity. Another day of grief. Another day of outrage,” Gad said in a tweet. “Another day of families unnecessarily learning their loved ones are dead. But, don’t worry, I remember from all of the other times we’ve done this… ‘guns aren’t the problem.'”

Several of the celebrities are calling for greater gun control and using the hashtag #GunControlNow in addition to Thursday’s trending topics “Thousand Oaks,” #BorderlineShooting and #MassShooting.

Jared Goff, quarterback for the Los Angeles Rams, whose training facility is located in Thousand Oaks, also tweeted his condolences to the victims.

“Heartbroken for the community. Thinking about everyone involved as well as friends and family of the victims,” Goff said in a tweet. “Keep them in your thoughts and prayers.”

The team also released a statement offering their sympathy for the victims.

“The Los Angeles Rams organization is heartbroken by the horrific shooting that took place last night in our community of Thousand Oaks. Our thoughts and prayers are with the victims, their families and our entire community,” it said.

The Los Angeles Kings held a moment of silence for the victims ahead of their game against the Minnesota Wild Thursday night, tweeting: “in the goal to amplify the message that acts of this nature cannot be accepted in our world. #ENOUGH.”

Tonight, the LA Kings and Minnesota Wild share in the goal to amplify the message that acts of this nature cannot be accepted in our world. #ENOUGH pic.twitter.com/XDErFFA8Ct

Rob Lowe posted a tribute on Instagram to the police office killed in the attack.

“This is what a hero looks like. My respect, gratitude and deep condolences to the family of Sgt. Ron Helus of the Ventura sheriffs dept.”

See some of the reactions from Hollywood stars below, including Lin-Manuel Miranda, Adam Lambert, Lucy Hale and director Joe Carnahan:

This is what a hero looks like. My respect, gratitude and deep condolences to the family of Sgt. Ron Helus of the Ventura sheriffs dept. He was killed charging into a blaze of gunfire to save many young lives. He was set to retire in a few months after 29 years of service. May God bless him.

My heart breaks for Thousand Oaks today. My heart is dust from being broken for so many places in our country so many times.https://t.co/eeeYoLdxn6 https://t.co/Amg3BSQ2Qm

We are on a hamster wheel of insanity. Another day of grief. Another day of outrage. Another day of families unnecessarily learning their loved ones are dead. But, don’t worry, I remember from all of the other times we’ve done this…”guns aren’t the problem.” https://t.co/dVyvQg9Bac

That’s 12 people that don’t get to live their lives anymore! That have families that have to suffer loss everyday now because of some mentally unstable person with a handgun. THERE HAVE BEEN 307 MASS SHOOTINGS IN 2018 ALONE! NO FUCKING MORE !! #GunControlNow

Heartbroken for our community. Thinking about everyone involved as well as friends and family of the victims. Keep them in your thoughts and prayers

So sad about the tragedy in Thousand Oaks. So many of my friends & I have frequented that bar . We live in a world where devastation like this can happen anywhere/anytime. I’m so sorry to the victims & everyone involved. And I’m so sorry pain like this occurs ????

#GunControlNow will not happen until Democrats control both the House AND the Senate.

You may say I'm a pessimist. I think I'm a realist. 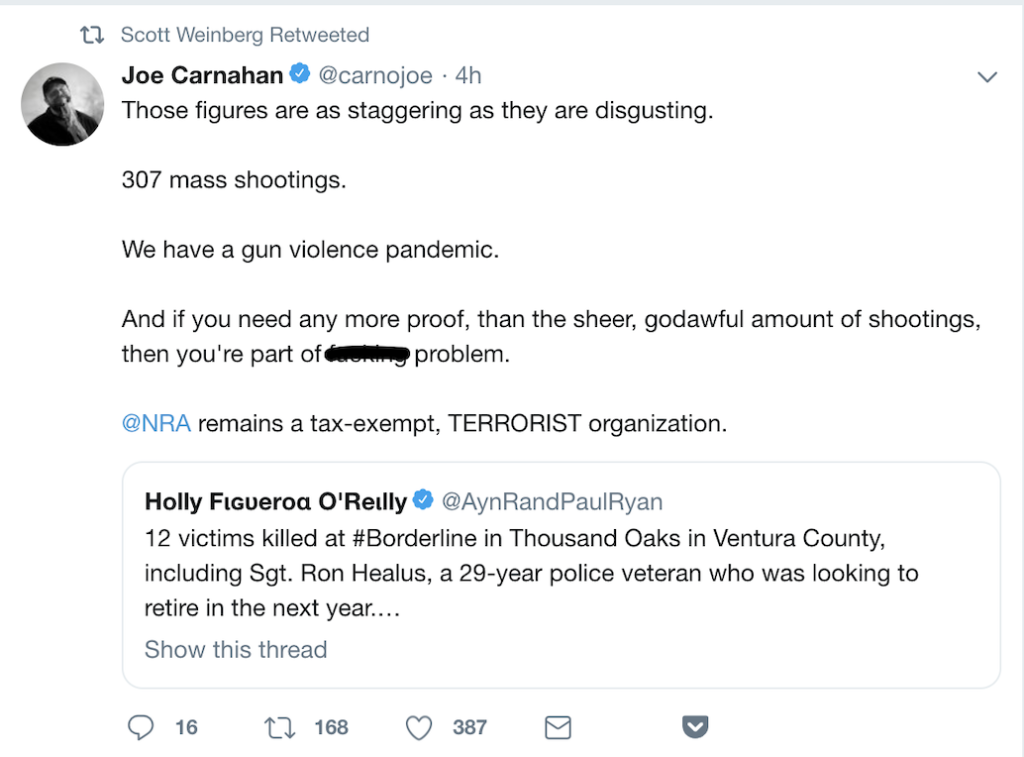 12 dead in a mass shooting at the Borderline Bar and Grill in #ThousandOaks #MassShooting #GunViolence @Everytown https://t.co/tuMzvxbuyc

My heart aches to learn about the horrific shooting in Thousand Oaks on college night. Praying for the injured and the families of those killed who, like so many others, have lost their loved ones to gun violence. Leaders in Congress must act — not some day, but now.

This man’s struggle with his guilt about surviving the shooting in #ThousandOaks hurts to see. Most of the victims were so young, their whole lives ahead of them. My heart goes out to all their families, as well as the family and friends of the officer killed in the line of duty. https://t.co/13aYYYK3q6