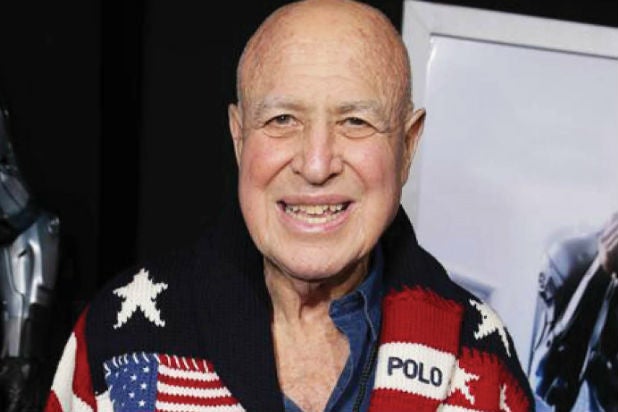 Star clients and mourning colleagues stepped out on Monday to remember veteran publicist Paul Bloch, the Rogers & Cowan crisis kingpin who died in May at 78.

Initial obits for Bloch, an imposingly tall and happy guy judging by the photos and anecdotes shared at the event, focused on his ability to spin or contain catastrophe — like the image derailments of Tom Cruise and Lisa Marie Presley or the legal woes of Nick Nolte and Sly Stallone.

Tonight’s service at a packed screening room on the Paramount Pictures lot in Hollywood ignored tabloid fodder and instead offered up an emotional celebration of Bloch’s life and work — including teary Bruce Willis and a celebrity-heavy sizzle reel.  It sent a message Bloch couldn’t have crafted better himself, an earned cliche that rang true: they don’t make them like him anymore.

Agency co-president Alan Nierob played emcee, first thanking Paramount boss Jim Gianopulos for hosting the memorial. Nierob said he attended many screenings on the lot sitting next to Bloch, who would be “snoozing through the movie and then wake up saying it would win best picture. And he meant it.”

Bloch started in the Rogers & Cowan mailroom in 1961, only 11 years after the agency opened and began elevating the profiles of movie talent outside the iron clutch of the studio system. Currently, the company is as diversified and relevant as any of its competitors in the space with sports, fashion and marketing arms.

Bloch was allergic to social media (probably a good thing these days, Nierob joked) and often called clients and staff on the phone, just after dawn, even on weekends. Even through failing health he still attended junkets and drafted strategies in his final days.

“He never judged me,” Willis told the crowd, which included clients Caitlyn Jenner and Michael Keaton. Willis just survived a savage Comedy Central roast and didn’t seem nearly as nervous taking bald jokes and shots from Demi Moore as he did addressing the industry and Bloch’s beloved family.

“In fact, he’d always have a better story about whatever particular situation I was in. We’d laugh, then he’d give me his advice. He always had a solution, or a way of finding that silver lining,” Willis said, wiping away tears.

Aside from famous faces, there were other indicators of Bloch’s influence. Hollywood Foreign Press Association president Meher Tatna made a surprise appearance to thank Bloch for being an ally in dark days.

Tatna then made remarks about the awards show getting “thrown off” television around 1983, when Olivier took the prize, though the telecast rights were not in question at that time. Olivier’s appearance did come on the heels of a controversy surrounding actress Pia Zadora, who earned a surprise Golden Globe in 1982 under questionable circumstances.

Tatna also said that, in 1984, Bloch got Paul Newman to shift a wedding anniversary date to come to take his own DeMille.

“He was instrumental in creating historical and magical moments for the Golden Globes,” she said. The HFPA has pledged a $25,000 to Bloch’s memorial cause UniCamp, a nonprofit at his beloved alma mater UCLA.

Seven years ago, when Bloch celebrated 50 years at Rogers & Cowan, the agency produced a tribute reel with stars and executives like John Travolta, Kevin Costner, Willis, Keaton, NBCUniversal vice chairman Ron Meyer and more. It was replayed for the crowd to great effect, keyed up by Nierob who cautioned, “tell them you love them while you can.”

The Hollywood crowd was well-informed and humbled, but the biggest hits of the evening were two of Bloch’s lifelong friends. David Weiss, who knew Bloch as a boy, simply called him a “magician.”

The other, a civic leader from Southern California’s Rancho Mission Viejo named Tony Moiso, simply said of Bloch: “Loyalty was his profession.”