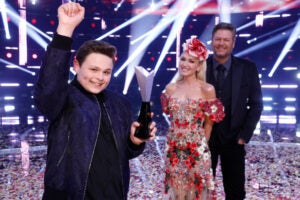 ‘The Voice’ Finale Hits a Low Note in Viewers

Are Scripts Still Selling in a Year of Pandemic? | Pro Insight

”When studio executives tell you that they’ve run out of money for the quarter or whatever, they are just politely passing,“ Underground producer/manager Trevor Engelson says

2020 charged out of the gate with middle fingers raised, and creative professionals of all kinds have been especially hard hit. We asked some top lit managers and agents how they’re weathering the tsunami of the pandemic and media consolidation — and what moves they’re making to keep their clients employed.

“It’s no secret that the film business is hurting,” APA agent Adam Perry said. “The initial panic was what to do with everything in production or about to go into production. I felt terrible for creatives, studios, producers, etc., (who) pour their hearts and souls into what they do.” Then came the force majeures (projects that unraveled), layoffs and pay cuts pretty much everywhere. “At the agencies, while feature and TV lit were still able to keep working, other departments have been clobbered. I am fortunate to be on the lit side of things,” Perry observed. “Touring has taken the hardest hit.”

According to Alibi manager/producer Jake Wagner, the upside has been extra focus on development. “For the first half of the quarantine that was all anyone could do,” he said, adding that one bonus is the business has been running more efficiently since the advent of Zoom meetings. “No one gets stuck in traffic; not a single Zoom ever doesn’t start on time.”

Despite a renewed focus on development, spec sales slowed in 2020, in part because “people had been stockpiling in preparation for a possible writer’s strike,” APA agent Halle Mariner said. “At the beginning of the year, we were all prepping for (a strike) and people were buying so much so they had things (ready) to go into production.” And then the opposite happened. “Everybody was hoping that would be the thing for us to do all summer, because the writers would be on strike. That threw everyone off; we had to pivot.”

More development is a good thing for writers, right? “Most executives are still excited to read,” Perry said. “During this pandemic, everyone is still looking for purpose. Just because they can’t buy as much right now doesn’t mean they can’t buy at all.” But in some cases, that excitement may also be because they know they don’t have to really consider submissions — COVID has given execs a spiffy new Get Out of Jail Free card.

But Mariner’s still positive. “At least our clients (get those) general meetings. Especially for me, because I work with a lot of younger clients, to be able to sweep the whole town with their script and just get buzz that way is really nice.”

So how does one close the deal then? Rarely by sending out a “naked” (no attachments) script, as it turns out. “If you’re just going out with things that you were going out with eight or 10 months ago,” Underground producer/manager Trevor Engelson said, “with just a really cool idea and a young writer who has a cool spec or whatever, you’re probably not going to sell it in this marketplace. But if you take that same exact writer, his cool spec and you package it up with an undeniable showrunner and get a director or an actor on board, then who’s going to say no?” He added that buyers right now will only grab up things that they must buy, “nothing that they want to buy. So it just has to be something where an executive needs to fear for their job if they pass on it.”

The Arlook Group’s Richard Arlook agreed. “I would probably never take a script with no elements, no matter how good it is, to a buyer or a financier,” he said. “In a best-case scenario they’re going to say, ‘Hey, this is really good. Can you get me a director?’ Or, ‘Go build it and then come back to me.’ In the ’90s, you could just call up a buyer and say, ‘Cancel your lunch,’ and you’d have a deal if it was pretty good. Now, you have to really package things.”

Wagner said he has not taken out any naked scripts in 2020, “and if I did, I was looking to build a package.” While scripts have sold this year, he added, “the big sales you’ve seen are packages, right? So the nice thing was during this kind of slower time, we all had more time to package material.”

But Engelson suggested that old rules don’t always apply anymore. “Nobody knows what the hell they’re doing right now; this has never happened before,” he said. “So although it’s harder to sell just a regular script or just a regular pitch, we’re still doing it. Out of the seven projects we’ve sold in the last few months of quarantine, a couple were just scripts or pitches with no attachments. In those cases, the scripts or pitches were so f—ing good — and had real competition from other buyers — they became hard for buyers to turn down because not only are they undeniably great, but there were other people who wanted them.”

Still, fear and uncertainty are Skippy Super Chunk-thick in the air. “Everyone’s thinking, ‘Is this going to be safe to get made? Is there a path to production?'” Mariner said. Buyers are trying to reassure folks that everything’s fine — yeah, for the huge names for whom it’s always fine. “In terms of the rest of the writers and the rest of us out there, it is a harder market,” she said.

According to Perry, buyers have asked agencies to submit fewer projects. “More often than not, we’re pivoting for a packaging situation where we are still getting things out fairly wide to producers, but (we tell them), ‘Look, we don’t expect this to be an old-school spec situation. We want to get our clients read, we want to get them a lot of good meetings, and we want to find the right partner to further develop this project and help us with the director, actor and buyer conversations.’ We need to present them with stuff that’s bulletproof and make it nearly impossible for them to say no.”

Along with the new COVID excuses comes the hoary ol’ chestnut: “Sorry, we’re out of money.” Despite the dire state of theatrical releases and widespread layoffs and consolidation, Engelson calls bulls—. “When studio executives tell you that they’ve run out of money for the quarter or whatever, they are just politely passing. There’s always money to be found in the right situation for the right script.”

Another divot in the lit landscape: Few tentpole-size sales or deals. “A lot of packages we’ve seen could be done for a price at a streamer,” Wagner said. “You don’t see the next ‘Fast and the Furious’ being sold right now, projects of that size.” Fortunately, the big streamers have their purses open.

According to Perry, “You’re going to start seeing bigger productions on the HBO Maxes, on the Amazons; Netflix is already doing it. Disney+’s budgets are going to swell. They’re going to make $100 million-plus movies, and then decide, based on the finished product, whether to release it theatrically or on the network. It’s still hypercompetitive, and they all need to make a splash.”

Streaming newcomers are also hungry for content — especially projects with high-voltage packages. “There is a kind of pressure for the streamers that aren’t necessarily Netflix to really make an impact,”  Arlook said. As for theatrical, many are still feeling the repercussions of Warner Bros.’ shift of its 2021 slate to simultaneous release on HBO Max, with no one really knowing yet what the landscape’s going to look like. Except that one way or another, movies and deals will still be made.

So while the new lit landscape may be pockmarked and cratered, fortunately, the industry has broken out the frickin’ jet-packs. “Even though the theatrical business is shrinking a bit,” Perry said, “our business is still going to be robust because of the race for content. If you look at the agency’s commission reports, it’s coming back. We’re going to be back in theaters, concert venues and sports stadiums come June, I’m telling you. I think there’s going to be a kick in everyone’s step come 2021.”

Mariner added, “People are going to be dying to get out of their house and back into theaters. We just have to give them something good.”