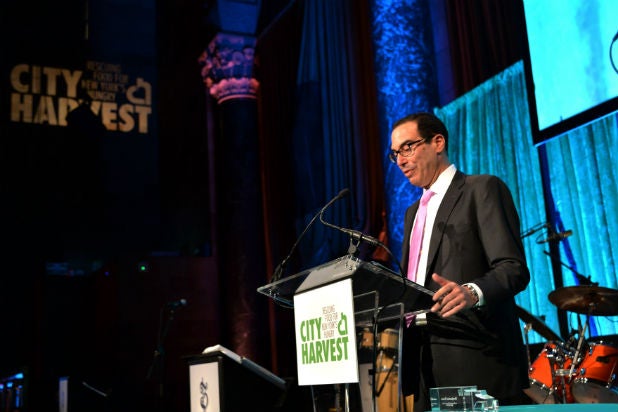 As film financier Steven Mnuchin leaves Hollywood to claim a top job in the Trump administration, many industry insiders will remember him as a money man who loved his work — but mostly picked up the check.

The former Goldman Sachs partner became Trump’s chief fundraiser in May and is now his pick for Treasury Secretary, a job that will give him enormous influence over economic policy and responsibility for 100,000 employees. He was the money man for films ranging from “Batman v. Superman: Dawn of Justice” to “Central Intelligence” to “Suicide Squad” to Academy Award winners like “Gravity” and “Mad Max: Fury Road.”

“Steve is not someone who will be greatly missed,” one senior film executive told TheWrap, speaking on the condition of anonymity.

“He was fine to deal with,” another insider recalled. “A little socially awkward, but fine.”

If Mnuchin was uncomfortable around the entertainment elite, he’s certainly worked through his anxieties. He has a brief cameo playing a banker in Warren Beatty’s “Rules Don’t Apply,” which is currently in theaters.

“He enjoyed the functions and really became accustomed to the lifestyle,” the insider said.

But Mnuchin was firmly “not a creative guy. He’s a money guy who, for what it’s worth, never really cared to dive deep and reach down into an organization,” according to another film executive who worked alongside him.

The industry is not short of financiers like Mnuchin, who open their checkbooks or shake millions loose as patrons of filmmakers and executives like Ryan Kavanaugh — for whom Mnuchin was a close adviser and Relativity Media board member before the company filed for bankruptcy in 2015.

At the time his resignation from the board, Mnuchin pulled millions in loans from his OneWest Bank off of Relativity’s books.

“Steve was a very active and vocal board member,” one individual said of his Relativity days. “He was very critical of spending and how the company allocated funds.”

Prior to the Chapter 11 process, Kavanaugh was known for high-roller indulgence like private jets and Malibu compounds.

Neither Mnuchin nor a Relativity representative responded to requests for comment.

The entertainment venture that Mnuchin will hand over for his D.C. position is RatPac-Dune, a partnership with producers Brett Ratner and James Packer that is an offshoot of his Mnuchin’s Dune Capital Management.

RatPac-Dune has an exclusive deal with Warner Bros, which was recently re-upped with terms that both parties found “mutually beneficial,” a person familiar with that arrangement told TheWrap. Previously, Mnunchin had a pact with 20th Century Fox under the banner Dune Entertainment, and was a financier on James Cameron’s “Avatar.”

RatPac-Dune had passive investments on titles including Sandra Bullock’s “Gravity,” though not all of the projects flew as high as that film, which won several Oscars, including one for Alfonso Cuarón as Best Director.

Mnuchin’s credits also include the lackluster “Pan” with Hugh Jackman as a steampunk Captain Hook, and Ron Howard’s pricey passion flop “In the Heart of the Sea.”