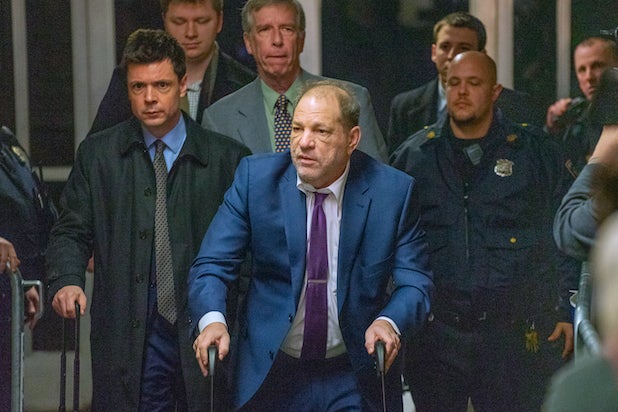 A New York jury on Monday found Harvey Weinstein guilty of third-degree rape and a first-degree criminal sexual act. As expected, the industry he once dominated reacted immediately.

Tina Tchen, president and CEO of the Time’s Up Foundation, on Monday hailed the criminal conviction of disgraced mogul Harvey Weinstein, who was found guilty by a New York jury of third-degree rape and a first-degree criminal sexual act.

“This trial — and the jury’s decision today — marks a new era of justice, not just for the Silence Breakers, who spoke out at great personal risk, but for all survivors of harassment, abuse, and assault at work,” she said.

Also Read: WaxWord: Harvey Weinstein Guilty Verdict Is Victory for #MeToo and a Warning to Hollywood

SAG-AFTRA president Gabrielle Carteris said in a statement: “We hail the courage and conviction of the powerful survivors who brought this case to trial and saw it through to the verdict. This verdict sends a thunderous message to other harassers and abusers: You can’t run and you can’t hide any longer. Increasingly, if you harass or abuse, you will be reported, you will get caught and you will be prosecuted. Our union unequivocally condemns discrimination, harassment and assault in all its forms and remains committed to finding solutions to ensure a safe work environment for our members wherever they work.”

Writers Guild of America, East said today’s guilty verdict against Weinstein “should remind all of us about the critical issues that have reshaped the consciousness, and perhaps the conscience, of the entertainment industry in the two-plus years since brave journalists – and even braver survivors – made his behavior known.”

It went on to say in a statement: “The revelations about Weinstein’s horrific conduct tapped a deep vein of rage among women in the industry which reverberated across the rest of society. All of us were forced to confront the awful reality that power imbalances are routinely sexualized. Careers and bodies are not safe.“

When Weinstein’s trial began in New York on Jan. 6, Rose McGowan joined other “silence breakers” Rosanna Arquette, Louise Godbold, Dominique Huett, Sarah Ann Masse, Lauren Sivan and Paula Williams to address the press. At that time, she and Sivan both said they didn’t believe Weinstein realized the severity of the crimes he was charged with.

Arquette was among the first to publicly react to the verdict, tweeting, “Gratitude to the brave women who’ve testified and to the jury for seeing through the dirty tactics of the defense. We will change the laws in the future so that rape victims are heard and not discredited and so that it’s easier for people to report their rapes.”

Gratitude to the brave women who’ve testified and to the jury for seeing through the dirty tactics of the defense .we will change the laws in the future so that rape victims are heard and not discredited and so that it’s easier for people to report their rapes

Those directly involved in the accusations and trial weren’t the only ones to make statements following Monday’s verdict, which came after weeks of testimony and five days of jury deliberation.

“Sitting in court just now, hearing that guilty verdict, watching Harvey be remanded–absolutely gratifying,” tweeted journalist Rich McHugh, who has worked with Ronan Farrow to shine light on accusations of sexual misconduct in Hollywood and media.

Farrow’s mother, Mia Farrow, also tweeted: “I hope it truly is a new day for survivors or sexual assault – women, men and children.”

I hope it truly is a new day for survivors or sexual assault – women, men and children. https://t.co/r8xdyUhCLN

After the verdict was declared, Weinstein’s defense lawyer Donna Ratunno said she was “disappointed” with the verdict.

“Obviously, this is a bittersweet day,” Rotunno told reporters outside the court building. “We are disappointed. We knew we came in and we were down 35-0 on the day that we started this trial.”

More celebrities continue to voice their support for the verdict, including actress Ashley Judd, Kathy Najimy and Padma Lakshmi.

For the women who testified in this case, and walked through traumatic hell, you did a public service to girls and women everywhere, thank you.#ConvictWeinstein #Guilty

Thank you to all who helped put this monster away. Make some room- more are coming. Proud to be a part of @TIMESUPNOW My respect , heart and soul to the survivors https://t.co/OVn7vKSCg7

If there's a man who doesn't deserve bail, it's him.