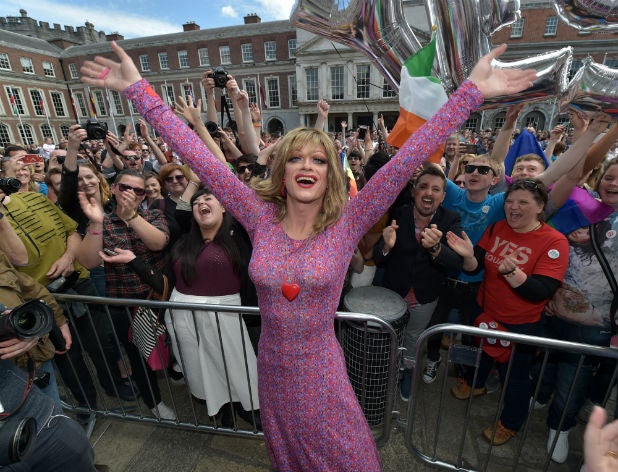 With early results from Friday’s historic referendum in Ireland suggesting a landslide victory for supporters of same-sex marriage, the wee island country is poised to become the first to approve marriage equality at the ballot box. And gay-friendly stars, adopting hashtags like #MarRef and #YesEquality, have taken to social media to voice their approval.

Here are some of the best reactions so far:

#Ireland leads the way!! I’m so PROUD to be Irish!! #equality pic.twitter.com/tXHjXXogYW

Here at #HayFestival – almost no signal but news in that Ireland’s Yes Campaign has carried the day. So so happy. Oscar smiles in his grave.

LOVE WINS IN IRELAND!! what fantastic news to wake up to! #YesEquality pic.twitter.com/KlAN4Jasaq

So proud to be Irish today A truly historic moment. So glad to be home. Oh and the [sun] is out #MarRef2015 #YesVote #YesEquality — Caitriona Balfe (@caitrionambalfe) May 23, 2015

CONGRATULATIONS to the Republic on saying yes to same-gender marriage! Now what about Northern Ireland?

Republic of IRELAND leads the world in social progress by legalizing marriage for all. #LoveWins (shouldn't it always?)

I'm staunchly against leaving civil rights up to a popular vote but I'm thrilled the populous of Ireland seems to embrace #MarriageEqaulity!

The pure joy of it. I'm so proud of Ireland today… We can all take pride in making history. Only sorry I can't be there to celebrate!