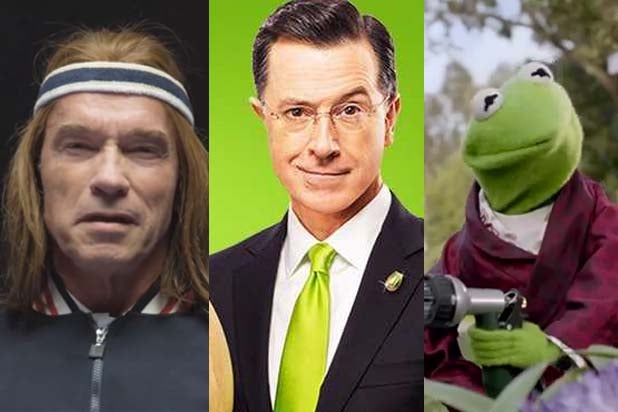 Hollywood stars are no strangers to commercials, and some of the biggest in town are out in full force this year to help brands impress football fans during Sunday’s Super Bowl XLVIII broadcast on Fox.

Bud Light has been teasing its collaboration with Arnold Schwarzenegger and Don Cheadle since the NFC and AFC championships earlier this month, while SodaStream’s “uncensored” commercial starring Scarlett Johansson went viral earlier this week. On Tuesday, Jaguar revealed its big spot starring a trio of famous Brits, and Toyota unveiled a minute-long road trip with “The Muppets.”

James Franco joins former “Daily Show” correspondent Rob Riggle in a 90 second ad, which will air between the coin toss and kick off, that showcases the Ford Fusion Hybrid.


Laurence Fishburne reprises his “Matrix” role as Morpheus for Kia. While posing as a valet attendant, he shows an unsuspecting couple “The Truth” about luxury cars by offering a simple choice: Take the blue key or the red key.

David Beckham will be flaunting his body during the Super Bowl for H&M, but viewers have until Sunday to choose the #covered or #uncovered version. Hmm…wonder which option his army of admirers will decide on?


Scarlett Johansson strips down and saves the world “one sip at a time” in an “uncensored” commercial for make-it-at-home soda company SodaStream.

“Colbert Report” host Stephen Colbert will be ordering American to get crackin’ on behalf of Wonderful Pistachios in two 15-second commercials set to air on Fox.

“Brooklyn Nine-Nine” star Terry Crews teamed up with “The Muppets” to sell the 2014 Highlander for Toyota.

Arnold Schwarzenegger teamed up with Bud Light for what appears to be a promising addition to the beer company’s “Whatever Happens” campaign.

Don Cheadle is also getting in on the fun with Bud Light, and a llama.