Hollywood has taken to Twitter to deride the Trump administration’s proposed budget cuts that would kill funding for the arts, including the Corporation for Public Broadcasting and the National Endowments for the Arts and Humanities.

Four-time Oscar-nominated actress Jane Alexander, who served as NEA chair under President Clinton, has already started tweeting out a call for action: “Calling all artists and arts lovers, (who doesn’t love the arts?) make your voices heard: SAVE THE NEA.”

Other recognizable names like Wil Wheaton, John Lithgow, Peter Fonda, Minka Kelly and Sophia Bush chimed in with their disapproval (see below).

Trump’s budget would zero out the $445 million budget for the Corporation for Public Broadcasting, which is a relatively small source of funding for programming and broadcast operations on public TV stations and NPR radio stations nationwide, according to the Washington Post.

The cut in funding would also eliminate the budgets for both national endowments, which stood at $148 million each in 2016, as well as $230 million for the Institute of Museum and Library Services, which supports libraries and museums. Additional cuts would affect two tourist mainstays in Washington, D.C., the Smithsonian Institution and the National Gallery of Art.

Here is a sampling of resistance coming out of Hollywood:

Calling all artists and arts lovers,(who doesn't love the arts?) make your voices heard: SAVE THE NEA

GOP Budget for destruction…We have two wolves inside us, war and peace. The one you feed is the one that leads. 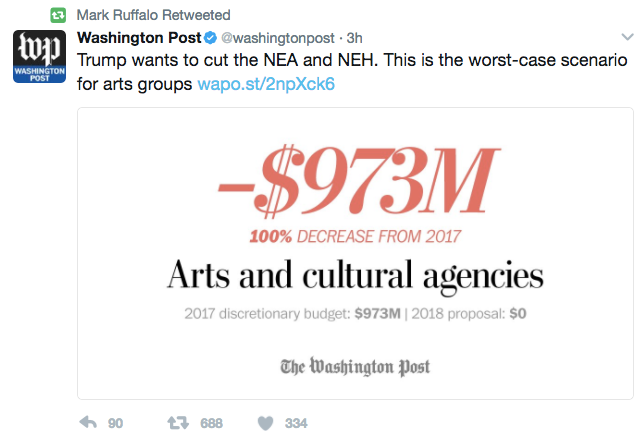 I want my National Endowment for the Arts and Humanities. I don't give a shit about security for this arrogance #Sad https://t.co/r1b8jT6GfH

Proposed Trump elimination of #NEA and #NEH is ruinous to our culture. #TrumpAtHisWorst. Contact your Congressional reps and #ResistTrump https://t.co/GPWf9TIicf

Battle is on. #Budget #arts https://t.co/QGiMcJ2f8h

Thank the National Endowment for the Arts. But thank 'em quick cuz misguided congress and commander in tweet about to axe them. #NEA #shame https://t.co/b19ItqPJxF

Of course a President who's never read a book would be eager to eliminate the Institute of Museum and Library Services. pic.twitter.com/EIEaeDYCQe

“There is no viable substitute for federal funding that ensures Americans have universal access to public media’s educational and informational programming and services,” president and CEO of the Corporation for Public Broadcasting (CPB) Patricia Harrison said in a statement.

Harrison continued: “The elimination of federal funding to CPB would initially devastate and ultimately destroy public media’s role in early childhood education, public safety, connecting citizens to our history, and promoting civil discussions – all for Americans in both rural and urban communities.”