The number of Hollywood films featuring LGBTQ characters plummeted nearly 40 percent in 2017 compared to the year prior, an annual survey of the major movie studios by GLAAD said on Tuesday.

The group found that just 14 wide releases from the majors, as well as offerings from their indie divisions, were inclusive of queer identities in 2017, a drop from 23 films in 2016.

Only 12.8 percent of studio films contained characters who identified as lesbian, gay, bisexual or queer — the lowest percentage of LGBTQ-inclusive major studio releases since GLAAD began tracking in 2012.

Trans characters were absent entirely from wide releases (though the report does contain praise for the Oscar-winning trans story “A Fantastic Woman,” released by Sony Pictures Classics).

“On screen, record-breaking films like ‘Black Panther’ and ‘Wonder Woman’ prove that not only does inclusion make for great stories — inclusion is good for the bottom line. It is time for lesbian, gay, bisexual, transgender, and queer stories to be included in this conversation and in this movement,” said GLAAD CEO Sarah Kate Ellis in a fiery introduction the survey, called the Studio Responsibility Index (SRI).

Now in its sixth year, the SRI applies a secondary test to the films that rate as inclusive. Called the Vito Russo Test, it’s a set of parameters that vets a given film for the quality of its depiction of queer people (often in mainstream commercial fare, gay people are used as punchlines or provoke anxiety in straight characters).

Universal Pictures got the highest score of any studio, but was still labeled “insufficient,” by the SRI. Of fourteen wide releases. four of the studio’s films made the grade. The highest praise was for Jordan Peele’s “Get Out.”

It’s a blink-and-miss moment, but there’s a revelation that Allison Williams’ character Rose also recruited at least one woman (Betty Gabriel) to bring home to her family, who conduct a sinister procedure that implants the brains of white people into able black bodies. 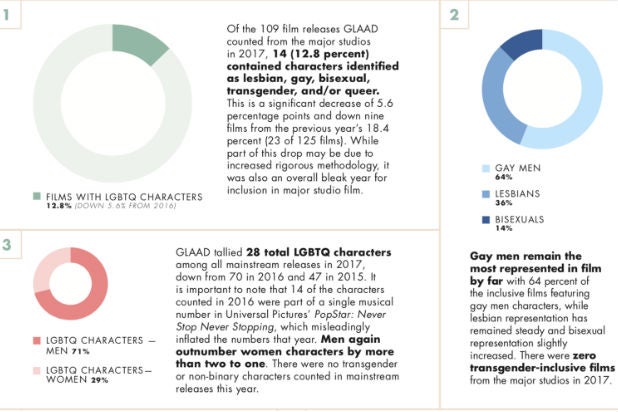 “The film’s presentation of the photo seems to be in line with the reveal of other love interests that Rose has brought home,” the study found. It wasn’t necessarily thrilled with the fate that awaited Gabriel’s character — which happens often with queer women in scripted content.

Behind Universal was 20th Century Fox (whose touching coming-out movie “Love, Simon” was released in 2018 and did not count for this survey) which merited inclusion for a gay male couple in “Alien: Covenant” and the creative and crucial deployment of Elton John in the plot of “Kingsman: The Golden Circle.” Fox was dinged for a portrayal of platonic female friendship in Amy Schumer’s “Snatched.”

Disney’s eponymous label and portfolio studios Marvel, Lucasfilm and Pixar tied for last place with Sony Pictures — with both studios only releasing one inclusive film and both earning a “poor” rating.

There was a small silver lining — while depictions of queer people are still overwhelmingly stories of gay men, people of color counted for 57 percent of those characters last year. None among them were Asian or Pacific Islander, however.

Ellis and leadership from GLAAD hosted a breakfast at the Beverly Hills offices of agency WME on Tuesday morning, where they presented the SRI to industry players. Lena Waithe and TK sat for a panel discussion afterwards to discuss how Hollywood can increase quality representation in film.

#BuryYourGays: 11 LGBT TV Characters Killed Off in 2017, From 'Kingdom' to 'The Walking Dead' (Photos)

Once again, gay and lesbian characters had a seriously high mortality rate on the small screen this year