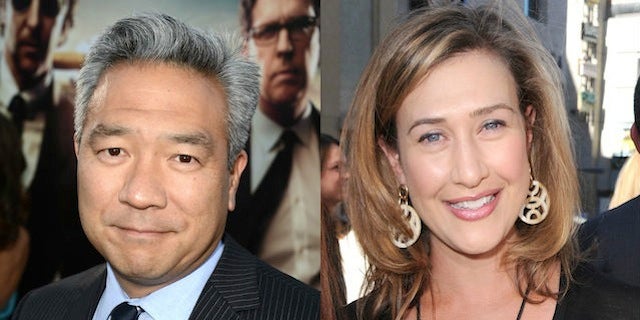 When Paramount announced Monday that Amy Powell would run its new TV division, it sent a message to the rest of Hollywood: Embrace digital or die.

The move resonates most in the context of another recent promotion – Kevin Tsujihara taking over as the head of Warner Bros.

Tsujihara, like Powell, was in charge of a less sexy, less moneyed part of a major media company. In Powell’s case, digital and microbduget films; Tsujihara was focused on Warner's digital assets before taking over WB's home entertainment division.

Tsujihara, like Powell, was up for a job against people running flagship “traditional” divisions. In fact, Paramount Chairman Brad Grey consulted Bruce Rosenblum, one of the men Tsujihara edged out, for advice on his TV hire.

Yet Powell and Tsujihara didn’t get their new jobs – higher salaries, big offices and all – because of “traditional” experience. They got these positions because of their handle on new business models, new opportunities and new talent.

In other words, they have a vision for where Hollywood is going, not where it’s been. Powell acknowledged as much when she spoke with TheWrap on Monday.

“Rob [Moore], Brad and Adam [Goodman] have all recognized the importance of being able to take risks and do things differently,” she said. “The definition of TV is evolving and changing in front of us.”

And with it, so is the definition of a future senior studio executive. Much of Hollywood's top digital marketing and distribution talent started out tinkering in obscurity — Powell was one, working in a back room with a staff of interns just a handful of years ago — but wound up with a place at top-level meetings and greenlight committees.

Others are waiting in the wings. Future corner offices would seem to belong to those whose names keep coming up in digital conversations — the likes of Sony's Dwight Caines (president, digital worldwide marketing), TJ Marchetti (SVP, digital marketing at Disney), Danielle DePalma (SVP for digital marketing at Lionsgate) and Lance Sloane (head of digital programming and development for Warner Bros.).

Also read: The Case for Kevin Tsujihara: Can He Take Warner Bros. Into the Digital Age?

This doesn't mean that Hollywood executives should get on their knees and surrender to Silicon Valley and the upstarts in Silicon Beach. However, they must be open to the many opportunities afforded by new technologies in production, marketing and distribution.

If they aren't, executives like Powell will climb over them on the corporate ladder.

Four years ago Powell was the studio's SVP of interactive Marketing. In the years since, she became one of Hollywood’s fiercest advocates of using social media and other new tools to build buzz for a movie online. (Her lack of a Twitter handle is curious.) She was promoted to be the president of two divisions — Paramount Digital Entertainment and Insurge Pictures — that stand out as innovators at an otherwise corporatized studio.

Paramount Digital has made apps and games, pushed the studios’ content onto new devices like Xbox and Playstation and produced popular web shows like “Burning Love.”*

As for Insurge, that label has pumped out inexpensive profit machines like “Justin Bieber: Never Say Never” and “The Devil Inside.”

Powell will use both of those divisions as blueprints for Paramount TV, which she hopes to run like a start-up. Powell was short on specifics, but here’s what you can expect: Paramount will welcome creators both established and unknown, employ data and social media to guide its business and distribute content as widely as possible.

"Digital is a division that has always had its hand on the pulse, what’s in the zeitgeist and what’s relevant," Powell said. "We understand how to reach audiences organically and authentically to understand the marketplace."

Whether or not you believe a Hollywood company is capable of operating like a start-up, that philosophy differs from the other studios out there.

Unlike Powell, Tsujihara did not enter his new job with a resume of hit movies or web series. However, he spent the previous few years watching declining DVD sales decimate the business and services like Netflix amass loyal audiences.

He also earned the respect of other executives at digital-first companies.

“Kevin Tsujihara is the first guy that has run a studio that really has a deeper  understanding of digital,” Rich Raddon, the former director of the Los Angeles Film Festival who now runs the Los Angeles-based start-up ZEFR, told TheWrap a few weeks ago. “In five years time, you won’t have a studio chief who doesn’t come from digital or understand digital in a deep way.”

That applies to all studios — film, TV and, yes, digital.

* Funny thing about “Burning Love,” it’s not just some web show anymore. It earned an Emmy nomination this year months after it got picked up by E! network as a show.