Maine senator Susan Collins announced in a lengthy 42-minute speech in front of the Senate Friday that she would vote “yes” on appointing Judge Brett Kavanaugh to the Supreme Court… and Hollywood has something to say about it.

Reaction came swiftly to the Republican senator’s announcement, with many frustrated at how long she spoke in criticizing the nomination process and praising Kavanaugh’s background before revealing her ultimate vote.

“I can’t watch this anymore,” actress Padma Lakshmi said on Twitter Friday. “This is such a letdown for women everywhere.”

Earlier in the day, activists and protestors flooded the hallway in front of Sen. Collins’ office. She was one of the few remaining swing votes in a tight race in which Republicans have a 51-49 majority over the Democrats. Friday, Collins had supported limiting debate on the Senate floor and advancing Kavanaugh’s appointment to a vote on Saturday.

Collins argued in her speech that Kavanaugh will be a check on Presidential power and is more of a centrist than he has been given credit for. She also called Christine Blasey Ford’s testimony “sincere” and “painful.”

Here’s how some other voices in Hollywood reacted to the news:

Susan Collins says she will vote to confirm Kavanaugh, partially because the man who lied repeatedly in his confirmation hearings told her he considered Roe “settled law.” Senator Collins, there is still time to change your mind and do the right thing.

I can’t watch this anymore. This is such a letdown for women everywhere @SenatorCollins.

You refused to meet wit Merrick Garland @SenatorCollins. Don’t lecture us about polarization. You stand for nothing.

Susan Collins turns her back on women who have been traumatized by sexual assault. Elections have consequences. To start turning the ship of state back towards the rule of law, decency, truth, and the preservation of Democracy, Nov.6 has to be a lot more than a blue wave. VOTE!!!

Susan Collins gets to go on and on about Kavanaugh on the Senate Floor but Senators are limited to 5 mins of questions during a hearing for a lifetime appointment….

Susan Collins you are a betrayer of women. 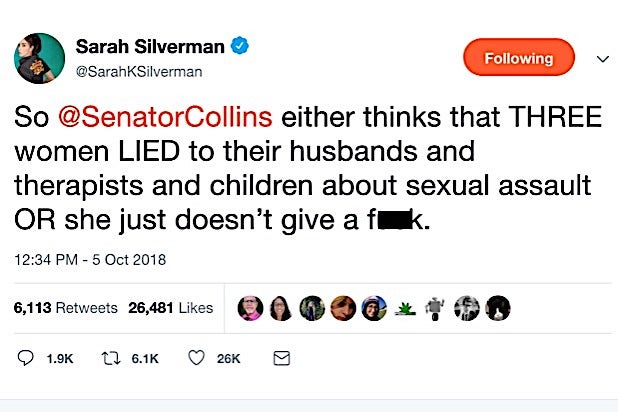 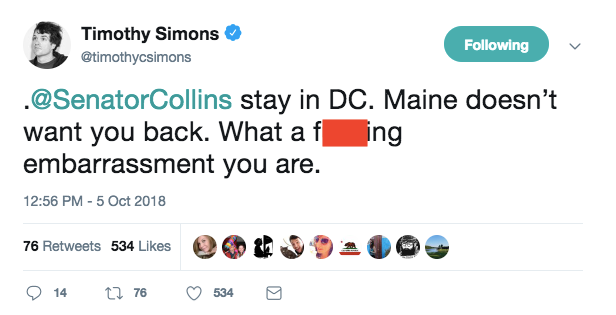 If anything good comes from the negative after the 2016 election it’s Feminine Solidarity… Thanks TRUMP Thank You Biggots, Thank You morally deficient Senators, Thank You Slimy wealthy Power abusing entitled men, & Thank You spineless sheep, So grateful for the Last Straw. https://t.co/g99MkwH1ZC

Keep away from Reacharound Sue.

It’s nice of Susan Collins to become the face of the generation I can’t wait to die.

.@SenatorCollins you should be ashamed of yourself

Susan Collins giving Kavanaugh all the passes. The double standards that conservatives build into their thinking and into our institutions are sickening.

Susan Collins & the rest of ‘em teaching us how they look at one of their own and see only the good, but when they turn eyes on you, duck. And then fight like hellfire. November 6, come on here.

Those in the media similarly shared their thoughts on Collins. Fox News host Laura Ingraham praised Collins’s “substantive and in-depth” speech, while Michael Avenatti chided Collins as being “entirely disingenuous and shameful.”

.@SenatorCollins is channeling Donald Trump. Entirely disingenuous and shameful. Where was she when Judge Garland could not even get an up or down vote? This is all about her post-office job opportunities on K street. We shall never forget. Not in Nov. Not in 2020. Not ever.

Thank you @SenatorCollins — for not giving into the mob.

Susan Collins castigating everyone for opposing the nominee before he was even named, which is, of course what McConnell did immediately after Scalia’s death.