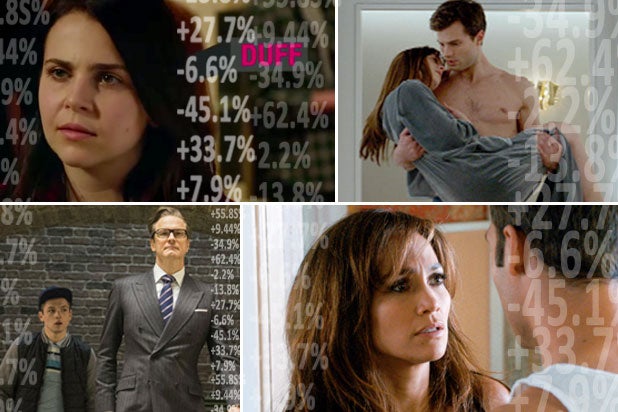 Hollywood is increasingly zeroing in on precisely defined racial and gender groups, taking to the next level a strategy typically used to market art house and niche films.

The shift is being driven by advances in the scope, depth and reliability of digital and “psychographic” research. That’s enabling studio marketing teams to cut costs while at the same time targeting the most critical audiences. The strategy has translated into box-office success for recent films including Universal Pictures’ Jennifer Lopez thriller “The Boy Next Door,” the Sony Pictures musical ‘”Annie” and the Weinstein Company’s family film “Paddington.”

This weekend’s openers, the female-skewing “Fifty Shades of Grey” and the male-angled “Kingsman: The Secret Service” are betting big on those audience sectors and skipping others. And CBS Films won’t mind if men and older women are oblivious to its comedy “The DUFF,” because if the teen girls they’re spending their marketing money on show up in reasonable numbers next week, the film will make money.

“My goal is to render that classic William Goldman quote null and void,” said Vincent Bruzzese, chief executive at entertainment research firm C4. For the uninitiated, the two-time Academy Award-winning screenwriter famously wrote about releasing movies, “Nobody knows anything. Not one person in the entire motion picture field knows for a certainty what’s going to work. Every time out it’s a guess and, if you’re lucky, an educated one.”

Thanks to Bruzzese’s C4, Kevin Goetz’s Screen Engine and other envelope-pushing digital research firms, Hollywood has more insight than ever about what movies are going to work, and with whom. The narrowly focused campaigns are saving marketing money and the box office results have been mainly positive. Those are developments that couldn’t come at a better time for a movie biz increasingly challenged by foreign competition and increasing entertainment options for U.S. moviegoers.

More than 100 million people read the steamy E.L. James trilogy upon which “Fifty Shades of Grey” is based. Aware that the vast majority of them were women, Universal and Focus Features focused initial marketing almost exclusively on women and emphasized the film’s romantic elements rather than the kink.

“You don’t need men to have a hit movie anymore, ‘Twilight’ taught us that,” said Phil Contrino, senior analyst at BoxOffice.com. “But I don’t think they’ll turn any away.” The early promo push helped trigger a media frenzy that has turned “Fifty Shades” into a cultural phenomenon since then, and the R-rated romance may in fact draw decent male numbers this weekend.

You don’t need women to have a hit either, providing you have the right movie. Twentieth Century Fox is hoping they have just that in the Colin Firth super spy adventure “Kingsman: The Secret Service.” It’s a classic counter-play to “Fifty Shades,” and Fox marketers aimed everything at men.

“You concentrate your media where you think you can find your audience,” said Chris Aronson, Fox distribution president. “We’re gunning for two quadrants.”

He was referring to young and older male moviegoers, two of the four audience quadrants along with older and younger women. The rule of thumb is that it takes about $10 million to effectively reach each quadrant with a nationwide release, so aiming media at just two groups cuts costs without  cutting into a movie’s commercial potential.

The formula works best with a low or moderately budgeted movie, as opposed to pricey blockbusters that need to connect with men and women and young and old audiences to offset their budgets.

Researchers identified women and Hispanics as key targets for the sexy thriller “The Boy Next Door” prior to its opening last month. Universal focused its efforts on those two groups, and the actress even made a series of special appearances in heavily Hispanic Miami.

It worked. The opening weekend audiences, which were 82 percent women and 49 percent Hispanic, bore out the strategy with a tidy $15 million debut weekend. The Jason Blum thriller didn’t do much business with other audience sectors, but it didn’t need to. Produced for $4 million, it has taken in $31 million in three weeks.

Sony knew most guys weren’t going to race out to see its Jamie Foxx musical “Annie,” especially with the crowded holiday marketplace, the NFL hitting high gear and “American Sniper” weeks away, so it aimed at women and families. Its first post-hacking release lifted studio spirits with a nearly $16 million first weekend, drawing a crowd dominated by families (76 percent) and women (70 percent), and has gone on to take in $85 million domestically.

Of course, certain movies have always targeted certain genders and audiences. Men went to see “Rambo,” women bought tickets for “Sex in the City” and there’s nothing new about that.

But thanks to social media, today’s psychographic research measures not only potential moviegoers, but their interests, attitudes and opinions. That opens up new realms for marketers.

“Social media has made it much easier to categorize people and put them in different buckets,” said Bruzzese, who cited the fan boy base for comic book movies as an example.

“It’s always been easy to identify and target the Comic-Con crowd,” he said. “But now, through their Facebook postings, or Twitter, even the books they read, we can tell whether they prefer Marvel or DC, or what kind of characters they prefer.

“Before now, we didn’t realize that women gravitate more to altruistic or tragic figures like Batman, and more men like demigod superheroes, like Thor,” he said.

The very detailed data can help marketers get creative, too.

Kids were the obvious target in January, when the Weinstein Company was rolling out “Paddington,” the live action-CGI import about the charming Brit bear. Researchers told TWC that most American youngsters didn’t know who Paddington was, but also revealed that many of their parents did, from reading the books as children.

With that knowledge, Weinstein marketers targeted mom and dad and highlighted the presence of Hugh Bonneville, a star on TV’s popular “Downton Abbey.” It opened in second place with a better-than-expected $19 million. The extra millions almost certainly came from parents, since a startling 78 percent of the audience was over the age of 25.

At the end of the day, no matter how well-marketed a movie is, quality still matters.

“Paddington,” for example, had a glossy 98 percent positive rating on Rotten Tomatoes which was key to its connecting with adults, according to TWC distribution chief Erik Lomis.

“It sure made it a lot easier,” he said.