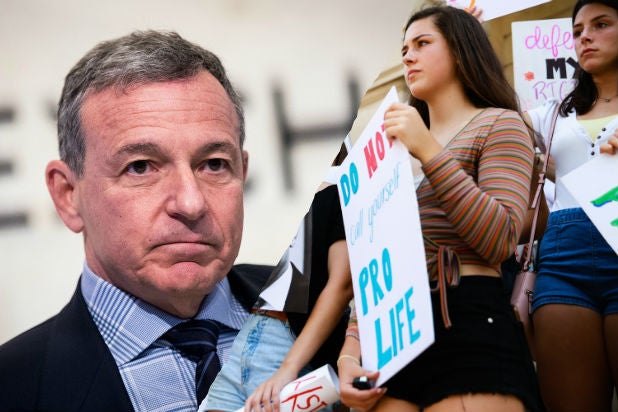 Both Photos From Getty Images

Hollywood threw down the gauntlet on Thursday in lining up and threatening to pull their business out of states that have adopted severe anti-abortion laws.

Billions of dollars in production are at stake. States and countries alike vie for their slice of the current content boom. But apparently no one counted on political pushback from the dream machine.

As of Thursday, nine media companies – Netflix, Disney, WarnerMedia, Sony, AMC, NBCUniversal, STX Entertainment, CBS with its premium cable company Showtime and Viacom – have now warned that they might pull their productions out of states that pass bills banning abortion.

Disney started the cascade of indignation shortly after Netflix chief content officer Ted Sarandos said that the streaming giant would “rethink” its “entire investment in Georgia” should an anti-abortion law take effect there. Asked if Disney would continue to shoot in the state at an opening of a Star Wars space at Disneyland, CEO Bob Iger said, “I rather doubt we will.” He went on: “I think many people who work for us will not want to work there, and we will have to heed their wishes in that regard. Right now we are watching it very carefully.” If the law takes effect, “I don’t see how it’s practical for us to continue to shoot there,” he added.

He was quickly followed by other major media companies on Thursday.

Most squarely in the crosshairs is Georgia, a state with a legendarily generous tax incentive and productions from Marvel’s “Avengers: Infinity War,” Netflix’s “Ozark,” AMC’s “The Walking Dead” and dozens of others.

Over the past decade Georgia has built itself into the second largest hub for Hollywood production, and that status now appears to be in grave danger.

How big would be the hit?

Georgia says it raked in $2.7 billion in direct spending from 455 productions in the state in 2018, a ten-fold increase from 2008 – before the tax credits were sweetened. Hundreds if not thousands of jobs would be lost, though many of the skilled production professionals may just move – as the special effects community does – to where the work is.

This poses, potentially, an existential problem for someone like Tyler Perry, a native who has based his entire business in the state. Similarly, it poses a serious challenge to a mega producer like Will Packer, also based in Georgia.

Since when do Hollywood studios have such strong views on women’s rights?

Also Read: Netflix Will 'Rethink Our Entire Investment in Georgia' if Anti-Abortion Law Goes Into Effect

Initially, the major entertainment companies were slow to react after Georgia Gov. Brian Kemp in early May signed into law a so-called “heartbeat” bill, banning abortion as early as six weeks into pregnancy.

Instead, it was a few producers who raised objections, including Imagine Entertainment. Director Reed Morano stated she would not shoot her Amazon show, “The Power,” in the state, if the law went into effect on January 1. Actors including Amy Schumer and Jason Bateman cried foul, and activist-actress Alyssa Milano called for a sex strike until Georgia changed the law.

The studios were still silent, for three weeks.

But as the abortion issue has gathered steam with unexpected force and speed in the past three weeks, as one state after another has signed its own version of a heartbeat bill — Louisiana, Alabama and now Ohio is poised to do so — Hollywood started to feel the heat from its own community.

That clearly led to the avalanche of opposition this week. One statement after another suggested that the media companies hope that the courts will solve the problem for them, but warned they would not work in states that enact these laws.

It may be true that many of these laws will not withstand a court challenge, as they are in open defiance of federal law.

But for the moment, Hollywood and the red states are headed for a showdown.