As the debate about gender equality in Hollywood continues to heat up, a new study released Tuesday shows that in 2014, films with female directors employed substantially higher percentages of women in key behind-the-scenes roles than those directed by men.

The findings by Martha M. Lauzen, Executive Director at the Center for the Study of Women in Television and Film at San Diego University, found similar results when women accounted for at least one-third of executive producers and producers.

“Women and the Big Picture: Behind-the-Scenes Employment on the Top 700 Films of 2014” is the first study to track women’s employment on the top 700 theatrically released films (omitting foreign films) in a single year.

“The findings suggest that women directors, executive producers, and producers may serve an important gateway function in the employment of other women in key behind-the-scenes roles,” Lauzen said.

When compared with figures for the top 250 films, the percentages of women directors and cinematographers almost double, Lauzen noted, as these are the most male-identified roles.

She said the findings indicate that hiring decisions for these positions may be most susceptible to mainstream film industry biases and expectations about what directors and cinematographers should look like demographically. 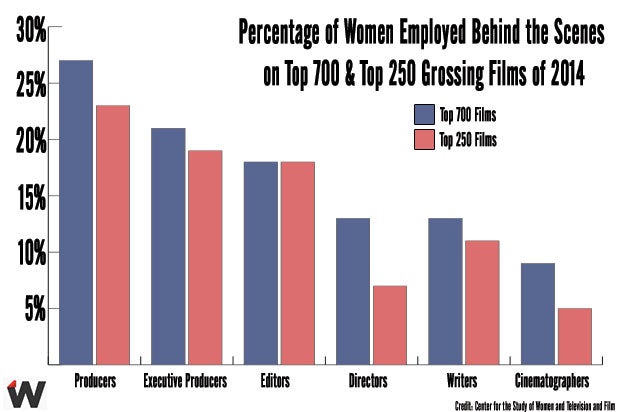