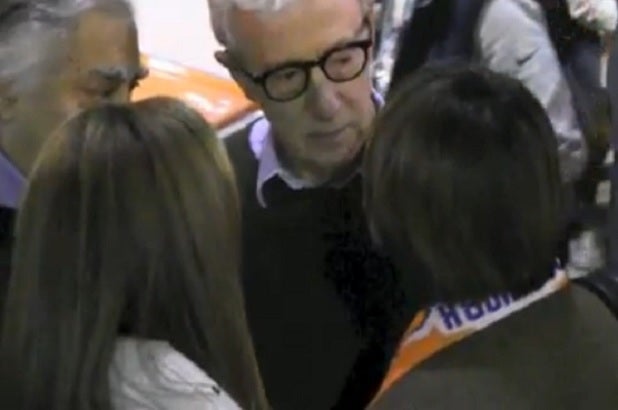 Hollywood grappled over the weekend with renewed allegations that Woody Allen, one of its most decorated and cherished auteurs, molested Dylan Farrow when she was 7 — but for the most part, response from the industry was muted.

The sudden death of actor Philip Seymour Hoffman on Sunday may have taken some of the industry’s focus away from Allen, who also reiterated his denial, calling the accusation “disgraceful.”

But apart from a ringing defense from the studio that released Allen’s Oscar-nominated movie “Blue Jasmine,” Sony Pictures Classics, there was barely a sound from an industry that is normally on the front lines of socially relevant causes like child molestation.

In an open letter published Saturday in the New York Times, Farrow charged that the director assaulted her in 1992, calling out the industry and actors who had worked with Allen.

“What if it had been your child, Cate Blanchett? Louis CK? Alec Baldwin?” she asked in the article calling out three performers in “Blue Jasmine,” for which Allen was recently nominated for an Academy Award for best original screenplay.

Blanchett spoke briefly when asked about the letter Saturday night, after winning an award at the Santa Barbara Film festival, with a diplomatic sidestep.

“It’s been a long and painful situation for the family, and I hope they find some resolution and peace,” she said.

To share in this way is courageous, powerful and generous. Please read: http://t.co/RKKREFB8hM

@Slate Whether you believe her or not, let her have her say then show some respect with your “opinions”, more ugliness doesn’t help

Meanwhile Sony Pictures Classics, the longtime distributor of the films of Woody Allen, on Sunday stood by the director.

“We have had a long, productive and rewarding relationship with Mr. Allen,” SPC said in a statement. “This is a very complicated situation and a tragedy for everyone involved. Mr. Allen has never been charged in relationship to any of this, and therefore deserves our presumption of innocence. “Films are major efforts of collaboration. There are scores of artists and crafts people behind Blue Jasmine. We support and celebrate their extraordinary work here, and count Blue Jasmine as a major achievement of Mr. Allen’s career.”

SPC has distributed Allen’s last seven films, including “Blue Jasmine” and is handling his next movie, “Magic in the Moonlight.”

A spokesman for the producers of Allen’s “Bullets Over Broadway,” slated to open in March, didn’t immediately have a comment Sunday.

Dylan Farrow has been heartened by the supportive feedback she has received so far, according to Nicholas Kristof, on whose blog the letter was posted. “She’s really heartened by the response and support she’s getting,” Nicholas Kristof told People. “She sends a big thank you to all those speaking up about sexual abuse and trying to break the silence.”

Dylan, now 28, married and living in Florida under a different name,  took a huge step coming forward, said Kristof. “She was nervous about what the reaction would be to an essay so personal, but she put herself out there.”

Allen has his supporters. Farrow’s letter comes a week after a friend of Allen’s, Robert B. Weide, wrote a long article in the Daily Beast defending the director’s past, and three weeks after the Golden Globes honored Woody Allen with the Cecil B. DeMille lifetime achievement award. At the Globes ceremony, Emma Stone and Diane Keaton spoke about Allen, with Keaton claiming that he had a four-decade career of writing strong female characters. “One hundred seventy-nine of the most captivating actresses have appeared in Woody’s films, because they wanted to,” she said.

Samantha Geimer, who has forgiven Polanski for allegedly raping her at 13, rejected the idea of a boycott of Allen’s movies. “Either you’re going to say you separate the art from the artist or you’re not,” she said in a taped interview with the Huffington Post. “If you don’t like his movies and they creep you out, don’t see them. If you don’t like him, don’t see his movies.

“I think it’s kind of a personal choice, what you spend your money on,” she continued. “I don’t think anybody has a place to forgive him but his own family. As far as a public boycott, I think we should save that for public corporations that are doing harm, not artists who make movies.” It’s not a new issue for Hollywood. The allegations were initially made back in 1992, when Farrow initially claimed that Allen molested her after he and actress Mia Farrow adopted her.

Allen, who has long denied the allegations, has been investigated on child molestation allegations but never charged.