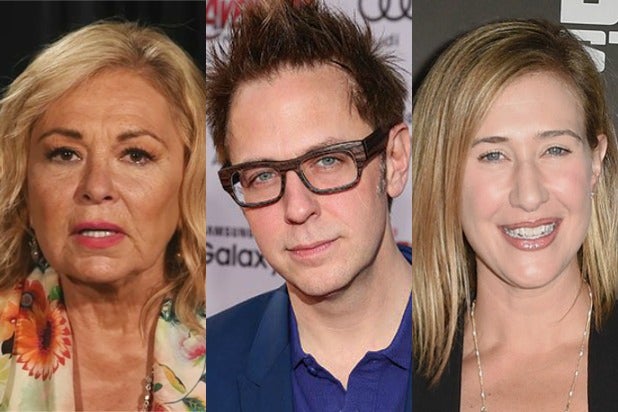 Hollywood, no stranger to loose talk and provocative points of view, has taken a hard turn into zero-tolerance on racially or sexually offensive remarks, with three major entertainment companies swiftly dismissing those who have crossed the line in recent weeks.

In the last month, Paramount, Disney and Netflix each fired high profile executives or talent for the same reason: their public, private or long ago comments were “inconsistent” with the company’s “values.” Paramount TV president Amy Powell, Netflix’s chief communication officer Jonathan Friedland, Marvel director James Gunn and Roseanne Barr were all dismissed with public disavowals by their companies (in some cases by the CEO personally) that seem all but certain to impact the careers of each individual.

The era of #MeToo seems to have sparked a need for companies to react swiftly to accusations of misconduct, but now that mentality is being reflected in the wake of insensitive comments about race, sexuality or gender, experts say.

“All of these entertainment companies are reacting to the developments that were uncovered pertaining to [Harvey] Weinstein, and now companies want to be quick to respond,” Rafael Rivera, executive director at Professionals in Human Resources Association, told TheWrap.

“They want to assure their viewers, customers, boards that they are upholding the values that are espoused by the organization and are going to apply the necessary punishment, or you might say, hold everyone to the same standard, which might not have happened in the past if you were the founder or an executive.”

There’s long been a history of executives saying questionable things or engaging in bad behavior, and they are “stepping down” to “spend more time with their family,” said Peter Kim, a professor at USC’s Marshall School of Business who has studied CEO transgressions.

But Kim added that a combination of the speed at which information about scandals move and the public’s lower tolerance for such news could explain why these firings are more frequent — and more public.

In June, Netflix’s chief communication officer Jonathan Friedland was fired for using the N-word on at least two separate occasions. Netflix CEO Reed Hastings issued a memo saying that Friedland “showed unacceptably low racial awareness and sensitivity, and is not in line with our values as a company.”

On Thursday, Paramount TV president Amy Powell was dismissed after CEO Jim Gianopulos said in an internal memo that several individuals came forward to raise concerns about inappropriate comments Powell made in a professional setting. Though the comments weren’t specified, an individual familiar with the matter said that Powell remarked about anger specific to black women on a conference call. Powell denies she made the comments.

And then on Friday, Disney fired director James Gunn from Marvel’s “Guardians of the Galaxy” franchise after conservative commentator Mike Cernovich unearthed old tweets in which Gunn joked about topics like rape and pedophilia. Again, Disney chairman Alan Horn called Gunn’s comments “indefensible and inconsistent with our studio’s values.” Gunn apologized for his previous tweets.

Of course, Gunn’s axing comes following Disney and ABC’s firing of Roseanne Barr from her top-rated show “Roseanne” after it was found she sent a racially-charged tweet about Obama aide Valerie Jarrett.

The draconian moves, in an industry known to have long-tolerated abusive behavior if not actual assault, is putting many inside the industry on edge. “I personally think Amy Powell was treated unfairly,” said one prominent agent, speaking on condition of anonymity. “They should have suspended her for a couple months as opposed to firing her, made her take sensitivity training. Everyone says something stupid on occasion.”

The CEO of an independent film company, an industry veteran, similarly disagreed with the new normal. “I can’t name a single  executive who hasn’t said things worse than that,” the executive told TheWrap, referring to Powell’s alleged remarks. “Dawn Steel set the standard; you won’t believe the things she said.” (Steel was one of the first women to lead a Hollywood studio, Columbia.)

Gunn’s tweets, which he posted as far back as 10 years ago, could set an interesting precedent. Companies will need to determine how far they’re willing to go in conducting background checks of employees, and setting consistent standards could be complicated.

“Are they going to investigate all their external talent? How far are they going to go,” Rivera asked. “There’s not a standard right now that I’m aware of in terms of how far back a company is going to look back… [at] your Twitter account. As far as Hollywood is concerned, because actors, directors and executives are public figures followed by many, then the company needs to determine, if it’s on social, that everyone can go back and check it out.”

For instance, Rivera posited, is five years acceptable, or is any time in the past subject to a background check? If the comments are from 20 years earlier, has the person demonstrated that they’ve grown and no longer believe those values? What if something said then is no longer acceptable now?

Over the weekend, a movement arose on social media for Disney to reconsider its firing of Gunn, including from #MeToo survivor Selma Blair, who credited Gunn with supporting her for stepping out to speak about her own experience of sexual abuse.

Kim said there isn’t much research to distinguish between how executives are fired based on public versus private comments. He explained that once any comment is out there, it becomes public, no matter in what context it was made.

But Kim did make a distinction between violations of competence and integrity. “For matters of integrity, our weighing of positive and negative information is completely reversed,” Kim said. “Once you’ve had the taint of having this lack of integrity, it’s very difficult to overcome.”

Also Read: Dave Bautista, Others Defend James Gunn: 'I Am NOT OK With What's Happening'

The biggest issue in this new age is how companies can ensure they’re treating employees fairly and avoid lawsuits because of a dismissal over just an offensive comment. The reality is, though, many companies are still adjusting to dealing with how to address employees’ behavior on social media.

“From an organizational perspective, how do you convey that this does not reflect us, that this doesn’t represent us as a whole, without being premature in firing someone?” Kim said.

“Ideally, the companies are adhering to the same rules that are set to all employees, Rivera added. “If the reaction is swift, it’s based on someone within the organization taking it to someone within human resources, investigating, and making a conclusion that they are terminating an employee with cause. If it’s being driven by public sentiment, that would be unfair to the employee, and they could sue the company.”

As for the stars and executives caught up in these scandals, Rivera suspected that even major PR agents handling celebrities will be offering some age-old advice: if it’s something you did in college you wouldn’t want an employer to judge you by, take it down.