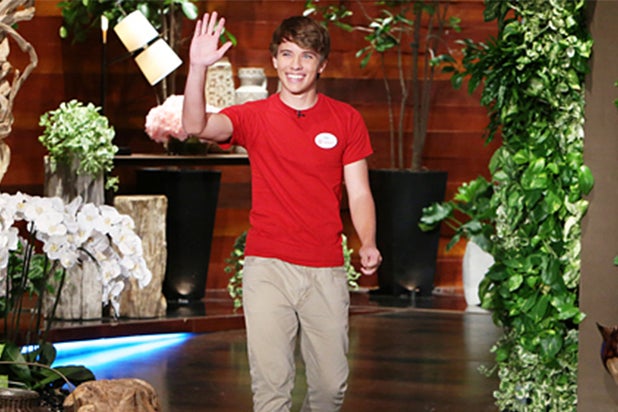 “Alex From Target” became an Internet sensation a week and a half ago and Hollywood already wants a piece of the action.

The ‪16-year-old Alex Lee was just another young clerk at Target on Nov. 1.  A day later, he was a social media sensation with his own trending hashtag: #AlexfromTarget.

“This can open a lot of doors for him,” chairman and founder of Fifteen Minutes Public Relations, Howard Bragman, told TheWrap. “He could easily make six figures. Maybe more, depending on his success.”

It all started when a store customer, who thought Lee was cute, snapped his picture and posted it on Twitter. For reasons no one can explain, his photo exploded, going viral within hours. By the end of the day, the dimpled boy from Dallas had become a bona fide global obsession.

The next thing he knew, Lee was being flown to Los Angeles for a one-on-one with Ellen DeGeneres, his Twitter account went from 144 followers to an eye-popping 700,000, and online clothing stores began offering knockoffs of Alex’s uniform for sale. The phenomenon known as “Alex From Target” became the subject of news articles in The New York Times, CNN and TIME Magazine.

But if he wants to capitalize on his star status, Bragman recommends Lee strike while the iron is still hot. “What he needs right now is the right Hollywood insiders who understand brand-building and how to monetize on his exposure.”

He may have another thing going for him: He’s already associated with a well-established, family-friendly brand. “It’s obvious this kid has great appeal,” Bragman said. “He’s young, good-looking, charming, and most importantly, he’s authentic. Target is going to look intently and see what they can do to capitalize on this exposure.”

Lee is the newest in a long line of civilians to be plucked from obscurity and thrown in front of Hollywood’s blindingly harsh Klieg lights. He didn’t win an award or star in a movie. He was just a pretty face, with an aw-shucks look in the right place at the right time. During his interview with DeGeneres, the talk show host asked if he had any other skills, such as singing or dancing.  Lee playfully answered, “I can apparently bag groceries pretty well.”

Jeremy Meeks, aka “Hot Mugshot Guy,” is perhaps the best-known insta-celebrity case this year. Meeks became famous in June after he was arrested on gun and gang-related charges and his mugshot was posted on the Stockton, California police department’s website. Women swooned, Meeks made the news and reportedly signed a modeling contract worth $30,000.

Bragman’s own client roster includes EJ Johnson, son of LA Lakers legend The celebrity offspring’s photo went viral after paparazzi snapped him leaving a posh Hollywood restaurant and clutching a Birkin bag while holding hands with a male friend. The headline the next day was: Son Goes Public With Boyfriend — Dad Proud.” The exposure landed him a dream job: a leading role on E!’s reality show “Rich Kids of Beverly Hills,” as well as guest appearances on “Fashion Police.”

And let’s not forget Grumpy Cat. The Tumblr sensation has become so huge that the feline is now getting its own movie.

But, not everyone will be able to translate those 15 minutes into cold hard cash. And even if they do, they might not be able to withstand the force of a tsunami-like wave of attention.

Like Lee, Kohrs was thrust into the spotlight after a stranger on the street snapped his picture. Soon, he was being interviewed by CNN, The Daily News, and the U.K. Daily Mail. Even though he’d never been on social media before, he suddenly had his own fan page with 50,000 followers.

“It got a little crazy there for a while. News vans started following me around on 911 calls. I couldn’t do my job,” he said.

Kohrs ended up having to take time off from work and eventually deleted his fan page. “It got to be too much,” he said. “Also, there was always that fear that something negative or inappropriate might come out.”

And when one becomes famous, skeletons in the closet have a way of surfacing, something Alex Minsky learned the hard way.

Minsky’s photos went viral earlier this year thanks to his killer abs and tatted-up torso. A Marine veteran who fought in Afghanistan, Minsky lost one of his legs after his Humvee ran over a roadside bomb. But instead of trying to hide his prosthesis, Alex flaunted it on camera, even wearing Speedos. His modeling pictures became so popular, Alex was invited to New York to sit down with the ladies of “The View.” But then, someone leaked several of his naked selfies. It was a humiliating moment, a reminder of how fickle fame can be.

“I thought, ‘Wow, is my mom going to see this?'” Minsky told TheWrap. “I’m sure I’ve lost a lot of opportunities because of those pictures.”

Whether or not Lee can translate his sudden brouhaha into Benjamins, says Bragman, is ultimately up to him. “I’d be happy to meet with him but I’d have to see what his hearts and passions are before I would consider taking him on.”

TheWrap reached out to Lee for this article via a representative from the Dallas-area Target location where he works. The rep said Lee is with family and is currently not interested in granting interviews.