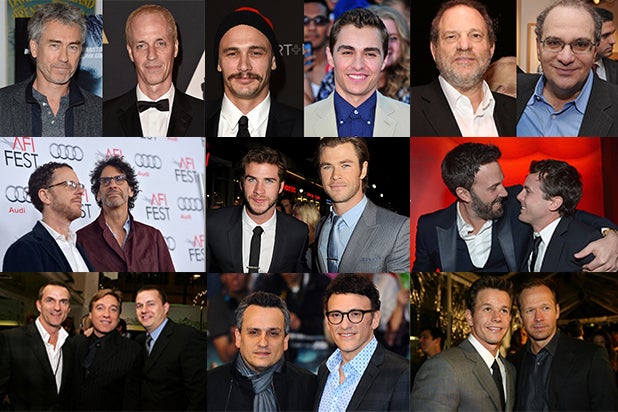 Twenty years after “Dumb and Dumber,” directors and brothers Peter and Bobby Farrelly are preparing to release the long, long awaited sequel “Dumb and Dumber To,” reminding Hollywood that they still have some muscles to flex.

But the Farrellys aren’t the only brothers who are running things in front of and behind the camera, in agencies, studios and on the Internet.

From the Coens, who can cast any A-lister they want in any of their movies, to the Hemsworth brothers Chris and Liam, steadily becoming leaders of the next generation of leading men, to John and Hank Green, revolutionizing the way young people consume their media, brothers are influencing how Hollywood does business from every facet.

Harvey and Bob Weinstein kick off TheWrap’s list of the 17 Most Powerful Brothers in Hollywood, but there are plenty more powerful last names around town. See the full list below.

Harvey has greenlight power, which is hard to come by in this town. He’s known by one name, like Madonna or Prince. He can call Quentin Tarantino 24/7. Now THAT’S power. Bob runs profit center Dimension, which is ramping back up with a new “Amityville” movie starring Bella Thorne and MTV’s upcoming “Scream” series, which could be a huge hit next year.

Christopher is one of the most powerful directors in this or any galaxy, having reinvigorated the comic book movie genre. Meanwhile, every screenwriter would be jealous of Jonah’s credits, which include his brother’s five best movies — “Memento,” “The Dark Knight,” “The Prestige,” “The Dark Knight Rises” and “Interstellar.” Not only did he create a hit series — CBS’ “Person of Interest” — but he has two HBO series in the works: “Westworld” and “Foundation.”

The Yorns are two of Hollywood’s top dealmakers. As a partner at one of the city’s most powerful law firms, Kevin represents Ellen DeGeneres, Maria Menounos and “CSI” creator Anthony Zuiker, while Rick manages A-listers such as Leonardo DiCaprio, Jamie Foxx and Justin Timberlake at his company LBI Entertainment. The duo share client Scarlett Johansson… as well as another brother — popular musician Pete Yorn.

Ben has a comeback story for the ages, climbing from tabloid fodder to the top of the A-list with a Best Picture Oscar for “Argo,” dramatic cred for David Fincher’s “Gone Girl” and Batman’s cowl on his mantle. Casey is an indie darling with crossover power, which allows him to jump from “Ain’t Them Bodies Saints” to “Interstellar.” He plans to topline and produce a film about the Boston Strangler, as well as star in Disney’s “The Finest Hours.” The Affleck boys worked together on Ben’s directorial debut “Gone Baby Gone” as well as “Good Will Hunting.”

The brothers Coen are co-writers, co-directors and co-producers on almost all of their movies, which have won devoted followings from critics and fans alike. They’ve each been nominated for 13 Oscars, winning four, and their movies have been nominated for 35 combined. They regularly work with one of the best cinematographers working today — Roger Deakins — and can attract any A-lister they want for their movies. Now that’s power.

This is Hollywood’s ultimate power brotherhood — from Yonkers. Kevin is one of the powerful managing partners at CAA, where he represents A-listers like Sandra Bullock and Meryl Streep. Stephen is a feared PR master (don’t cross him) and co-founder of Slate, where clients range from Jennifer Aniston and Anne Hathaway to Johnny Depp. Chris is a top talent manager at Management 360, where he guides the careers of Margot Robbie, Chadwick Boseman and Frank Grillo, all of whom have major tentpoles coming out in the next few years.

Ted is the older brother, the network executive who is Chairman of NBC Broadcasting. Ted once ran E!, and was previously the President and CEO of the Comcast Entertainment Group and Chairman of ABC Entertainment. Whatever coast he’s on, he’s never far in spirit from baby bro Chris Harbert, a top television agent at CAA who counts Joss Whedon among his A-list clients.

Like the Coens, the Russos are one of the few pairs of brothers on this list who do most of their work together. From being championed by Steven Soderbergh and George Clooney early in their career to winning an Emmy for directing the pilot episode of “Arrested Development” and then becoming regular directors on NBC’s “Community,” the Russos have been steadily ascending the Hollywood ranks. Their biggest break came in 2013 when they were the surprise choice to direct Marvel’s “Captain America: The Winter Soldier,” which ended up being one of the most well-received comic book movies. They are now preparing to direct “Captain America: Civil War,” and rumor has it they have their eye on the “Avengers: Infinity War” directing gig as well.

It started when both brothers were considered for the role of Marvel’s “Thor.” Liam came close, but it was Chris who ultimately landed the coveted role, which signaled the potential that both of these handsome Aussie brothers have as members of Hollywood’s next wave of leading men. Chris went on to be an Avenger, while Liam landed his own franchise in “The Hunger Games” opposite Jennifer Lawrence. Out to prove they have serious acting chops and longevity, Chris and Liam have been diversifying their portfolios, taking on leading roles in Ron Howard’s whale tale “In the Heart of the Sea” and Kieran Darcy-Smith’s Western drama “By Way of Helena,” respectively.

James Franco may not be a traditional Hollywood movie star, but that’s fine with us. Dissatisfied with his place in the industry, James embraced his artistic side and embarked on an eclectic collection of projects, from art shows to college teaching jobs to directing and starring in his own films, thereby carving out a niche in Hollywood that’s uniquely his own. Little brother Dave, on the other hand, seems to now be slipping nicely into the role once earmarked for James. After charismatic, scene-stealing turns in comedies like “21 Jump Street” and “Neighbors,” Dave is now being groomed to take on more leading roles, with Sony developing action comedy “Intern’s Handbook” as a starring vehicle around the young actor.

The Gilroys are known for their Hollywood insider status — and also for their incredible talent, which they may have inherited from their father Frank D. Gilroy, a Pulitzer Prize winning playwright, director, and screenwriter.) Older brother Tony, who has two Oscar nominations under his belt, has written a dozen landmark Hollywood films including the four “Bourne” movies. He even directed the last one, “The Bourne Legacy,” as well as the 2007 George Clooney drama “Michael Clayton.” Fellow screenwriter Dan co-wrote “The Bourne Legacy” with Tony and recently made his directorial debut with “Nightcrawler,” which stars his wife Rene Russo as well as Jake Gyllenhaal. Tony produced “Nightcrawler,” which was edited by their brother John.

The Duplass brothers are a big deal in the indie world, especially as leaders of the so-called “mumblecore” movement that’s become more popular and mainstream in recent years. As directors, their notable films include “Cyrus” and “Jeff, Who Lives at Home,” and they also produced “Safety Not Guaranteed.” The brothers have an HBO series called “Togetherness” on the horizon and they occasionally show up on Fox’s “The Mindy Project.” Mark has also been beefing up his acting credits, as not only does he star on FX’s “The League,” but he has recently appeared in more commercial fare like “Tammy” and “Zero Dark Thirty.”

Mark Wahlberg is an Oscar nominee and one of the most in demand and bankable leading men in Hollywood, particularly on big movies that involve a lot of explosions, like “Transformers: Age of Extinction.” Donnie’s a series regular on long-running cop drama “Blue Bloods” and will soon join new bride Jenny McCarthy on the reality show “Donnie Loves Jenny.” The brothers also produce and star on reality show “Walhburgers,” about a restaurant they own with their chef brother, Paul. The show has been on the air for two seasons and was nominated for an Emmy. Not bad for two brothers who started out their careers as teen pop idols in the 1990s.

To a certain young, female section of the internet, John and Hank Green are the biggest stars on the planet. In more traditional circles, John is best known for his bestselling Young Adult novels, particularly 2012’s “The Fault in Our Stars,” which was made into a hit movie starring Shailene Woodley. Other adaptations are on the way, but the two Greens are also enormously successful online entrepreneurs, with almost 3 million subscribers to their VlogBrothers Youtube Channel. The two are also the founders of VidCon, a multi-genre online video convention that’s grown from 1,400 attendees in its inaugural edition in 2010 to 18,000 attendees in 2014.

They’re the “Dumb and Dumber” brothers with the comedy cache to convince Jim Carrey and Jeff Daniels to return for a sequel 20 years later. They also did the comedy classics “There’s Something About Mary” and “Kingpin” together, and are developing several feature projects around town.

From creating “In Living Color” (Damon and Keenan) and the “Scary Movie” franchise (Shawn and Marlon) to starring in countless hit films and TV shows including “My Wife and Kids” and “White Chicks,” the Wayans are a bona fide comedy dynasty. Even their offspring are getting into the family business, with Damon Wayans Jr. among the most successful, with roles on hit sitcoms like “Happy Endings” and “New Girl” and Luke Greenfield’s summer sleeper “Let’s Be Cops.”

Owen is the Oscar-nominated co-writer of “The Royal Tenenbaums” whose recent collaborators include Woody Allen (“Midnight in Paris”), Paul Thomas Anderson (“Inherent Vice”), Matthew Weiner (“Are You Here”) and Wes Anderson (“The Grand Budapest Hotel”). Clearly, he’s doing something right. Meanwhile, Luke recently starred on HBO’s “Enlightened” and delivered a strong supporting performance as Kristen Wiig’s husband in “The Skeleton Twins.” He just wrapped Reed Morano’s directorial debut “Meadowland” and landed a key role in Will Smith’s football concussion movie at Sony. The Wilsons often work with their other brother, Andrew, who directed them in “The Wendell Baker Story.”