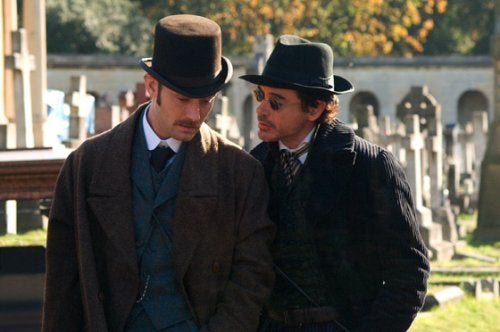 For the third straight week, Robert Downey Jr.’s adventure film "Sherlock Holmes" topped the DVD rental charts. There was more good news for "Holmes," as the revamp of the Arthur Conan Doyle detective classic also managed to topple "Alvin and the Chipmunks: The Squeakquel" from its perch on the sales chart, according to Rentrak.

The feat was made less impressive by the fact that "Holmes" faced weak competition with no significant new releases hitting stores last week. That should soon change. Oscar winner "Crazy Heart" and nominee "The Lovely Bones" hit DVD shelves Tuesday and James Cameron’s 3D epic "Avatar" was released Thursday, crippling "Holmes’" chances of dominating the sales and rental charts next week. Barring a major upset, the blue-skinned Na’vi likely will be both rental and sales chart champions.

Rounding out the top five slots on the sales chart were the Sandra Bullock football drama "The Blind Side," the vampire romance "The Twilight Saga: New Moon" and the animated movie "The Princess and the Frog."