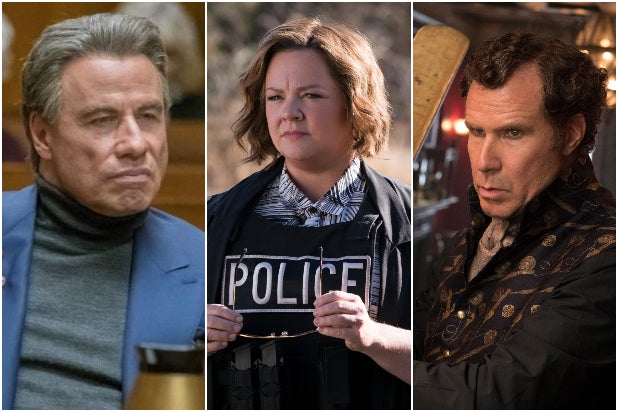 If their dismal reviews wasn’t punishment enough, for the 39th year, the Razzie Awards seek to recognize the achievements of the worst movies of the year. And for 2019’s crop of nominees, John Travolta’s “Gotti” and Will Ferrell and John C. Reilly’s “Holmes & Watson” both received the “honor” of being nominated for Worst Picture of 2018.

Melissa McCarthy might be nominated for an Oscar on Tuesday morning, but on Monday morning, she scored a nomination for Worst Actress for both “The Happytime Murders” and “Life of the Party,” and the former also landed among the five Worst Picture nominees. The box office bomb “Robin Hood” and Helen Mirren’s “Winchester” rounded out the nominees.

Even the first family found a way into the nominees, with Donald Trump and Melania Trump both getting nominated for portraying themselves in the documentary “Fahrenheit 11/9” from Michael Moore. And unlike the Oscars, the Razzies also feature a category for Worst Screen Combo. This year, “Johnny Depp and his fast-fading film career” were nominated for his voice work in “Sherlock Gnomes,” as were the combo of puppets and humans in “The Happytime Murders” during “those creepy sex scenes.”

Each year on the eve of the Oscar nominations announcement, the Razzies ask you to “Own Your Bad” and encourage winners to graciously come and accept their gold-colored “$4.97 trophy” shaped like a raspberry. In the past actors like Dwayne Johnson and Sandra Bullock have proudly accepted the award, even when Bullock was in the midst of an Oscar race for “The Blind Side.”

See the full list of nominees below and via Razzies.com.