The news broke Monday that CBS has given a script commitment to a half-hour comedy based on ShitMyDadSays, a Twitter account operated by writer Justin Halpern. "Will & Grace" creators David Kohan and Max Mutchnick, who’ve yet to find any success following the end of their iconic NBC comedy, will executive produce via Warner Bros. TV.

For the painfully unhip, SMDS chronicles the ribald and cranky musings of Halpern’s dad. It’s proved popular enough to land a book deal and, now, a TV development pact.

But some critics are already wondering whether or not the CBS deal is an example of media hype gone too far.
"One does have to wonder why Warner Bros. needed to do a deal with Halpern to develop a show with this theme," wrote the LA Times’ Company Town blogger Joe Flint. "Not to take anything away from Halpern… but shows featuring sarcastic fathers who torment their offspring are hardly new. Witness Peter Boyle in ‘Everybody Loves Raymond’ or John Mahoney in ‘Frasier’ or Ed O’Neill in ‘Married … with Children’ and now ‘Modern Family.’ Halpern hardly has a patent on the concept."
Jill Kennedy, who blogs for  business website MankaBros.com, declared "SMDS" officially over.
"It’s dead," she wrote. "Just imagine what CBS/Warner Bros. and ‘Will & Grace’ creators David Kohan and Max Mutchnick will do to it. You realize, it will now be called:  ‘My Dad’ (or ‘Things My Dad Says’)… or some tame/lame variation."
And writing for Ecoconsultancy.com’s media blog, Patricio Robles calls the CBS deal a sign of old media’s creative bankruptcy. "The fact that 70 tweets can earn a book deal or television project is perhaps the best evidence yet that the traditional media is flailing in the wind," he writes.
One commenter on Gawker.com also expressed despair over what the Twitter deal means for aspiring comedy scribes. 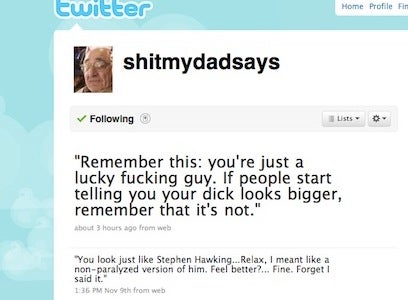 "I’m glad that as an unemployed writer with a handful of network credits under my belt, I can now throw out the stack of original, character-driven pilots and painstakingly crafted screenplays on which I’ve spent the last few years, and get to work on my pitch for a show about that text message I got one time from that guy," the poster wrote."The
Internet is a legit comedy writer’s worst nightmare."
The CBS deal for SMDS isn’t the first time an Internet meme has been optioned by Hollywood. Fox this summer confirmed plans to develop a TV show based on the website TextsfromLastNight.com.