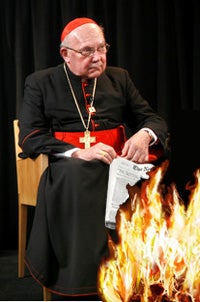 Somebody call Dan Brown. The tête-à-tête between the New York Times and the Vatican is boiling over.

A spokesperson for the New York Times defended the paper’s reporting late Thursday, after a top Vatican official unleashed a rather harsh rant against the paper for its “disturbing” coverage of Pope Benedict XVI’s handling of sexual abuse cases.

“We stand by that reporting,” Times spokesperson Diane McNulty said.

In an article posted on the Vatican site (which, by the way, sucks in Firefox), Cardinal William J. Levada rails against the Times for a pair of articles – one news, the other editorial.

“Both the article and the editorial are deficient by any reasonable standards of fairness that Americans have every right and expectation to find in their major media reporting,” Levada wrote.

In his 2,400-word essay, Levada (pictured, about to burn the Times) defends the Pope, criticizes the Times’ “usual bias,” and even calls out Maureen Dowd by name: “As a full-time member of the Roman Curia, the governing structure that carries out the Holy See’s tasks, I do not have time to deal with the Times’s subsequent almost daily articles by Rachel Donadio and others, much less with Maureen Dowd’s silly parroting of Goodstein’s ‘disturbing report.’”

Levada added: “I ask the Times to reconsider its attack mode about Pope Benedict XVI and give the world a more balanced view of a leader it can and should count on.”

“The allegations of abuse within the Catholic Church are a serious subject, as the Vatican has acknowledged on many occasions,” McNulty said. “Any role the current pope may have played in responding to those allegations over the years is a significant aspect of this story.”

The aggressive tone of the Vatican’s defense may sound out-of-character, but as Politico notes, the church has been known to attack media elsewhere:

“John L. Allen Jr., a senior correspondent at the National Catholic Reporter and considered one of the top reporters on the beat, said over e-mail that the Vatican recently responded to a scandal in Italy by conspiring “to smear an Italian Catholic journalist by leaking fake documents suggesting he was involved in a gay affair.”

“Vatican spokespersons blasted the Italian media for irresponsible reporting,” Allen continued. “The only reason Americans think this is exceptional is that because this time it’s an American news outlet!"