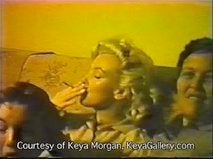 A home movie showing a relaxed Marilyn Monroe apparently smoking marijuana has surfaced, retrieved from an attic some 50 years after it was filmed.

The silent, color reel-to-reel film, shot at a private home in New Jersey, recently was purchased by collector Keya Morgan for $275,000 from the person who took the film, who has asked to remain anonymous.

Morgan and the person who shot the film gave Reuters permission to use it in shortened form. The copyright of the image will be put up for sale on eBay later this week, Morgan said.