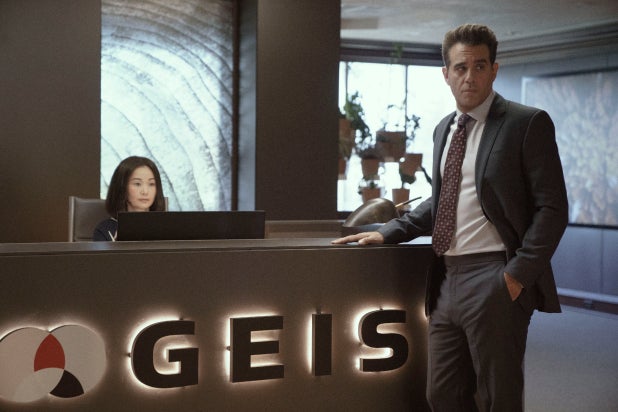 (Warning: This story contains spoilers for the first season of Amazon’s “Homecoming.”)

If the Geist Group, the large monolithic company at the center of Amazon’s “Homecoming,” reminds you of another big, shadowy company from a Sam Esmail-led series, well, the “Mr. Robot” creator gets it.

“If I have to psychoanalyze myself, I would say there are a lot of similarities,” Esmail tells TheWrap after we pointed out how similar the two companies appear. The only real differences between the two are that Esmail came up with E Corp himself, while The Geist Group was something already baked into “Homecoming,” as it was adapted from the Gimlet Media podcast from Micah Bloomberg and Eli Horowitz.

“I just think there’s something in the air right now, something in the world that’s going on where we have this untrustworthiness with powerful conglomerates,” Esmail said. “In that way, even though it resonates on a personal level, I do feel like it’s a relevant topic to explore.”

Geist Group is the company backing the Homecoming project, which ends up developing an experimental drug that “cures” veterans of PTSD by physically erasing painful memories. While it’s initially stated that its purpose is to help veterans transition back to civilian life, the twist is that Geist is doing this in order to send them back out into the field. In “Mr. Robot,” E Corp – or Evil Corp, as its derogatorily referred to by Rami Malek’s Elliot – is a nefarious giant conglomerate. The company, essentially a combination between Apple and Merrill Lynch, is frequently the target of the hacker group fsociety.

The similarities don’t stop there. “Mr. Robot” and “Homecoming” both feature major plotlines that deal with someone attempting to take down these giant companies. In “Homecoming,” after Heidi Bergman (Julia Roberts) realizes what Geist is up to, she drugs herself and one of the soldiers she was working with, so he ends up getting sent home instead back to war. In “Mr. Robot,” fsociety succeeded in hacking all of E Corp’s files, essentially wiping out all consumer debt at the end of the first season, with subsequent seasons dealing with the fallout.

In case you think Geist Group is the runaway winner in the “evil giant company” race, with its memory-erasing drugs and lying to war veterans, it is revealed during the first season of “Mr. Robot” that E Corp covered up a toxic gas spill at one of its factories, and in the ensuing 24 months, 26 employees there ended up getting leukemia, including Elliot’s father, Edward (Christian Slater).

But while E Corp was definitely something that Esmail designed, Geist Group was more of a happy coincidence. “For me, what resonated were the characters and the journey they go on and the themes that Eli and Micah explore in such a human way,” he said of his reason for taking on “Homecoming.” But we’d bet writing about a shadowy company that’s pulling the strings behind the scenes didn’t hurt, either.

“It resonated with me four years ago when I first wrote ‘Mr. Robot. I feel like since then its only amplified.”