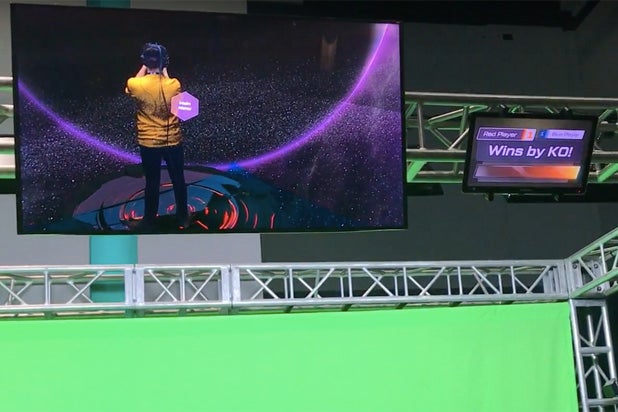 At VRLA, the virtual reality expo held in Los Angeles earlier this month, one of the most popular booths belonged to “Racket: Nx,” a squash-type game where audience members could watch the action in the same “virtual space dome” as the players.

But “Racket” wasn’t created by a pure gaming company; instead, it’s from the Israeli firm behind the critically acclaimed drama series “Homeland,” Keshet International. And according to Keshet CEO Alon Shtruzman, entertainment VR is ready to explode — and his company is already working on it.

In a conversation with TheWrap, Shtruzman shed light on some of Keshet’s virtual reality ambitions. They won’t look like “Homeland” — at least not yet — but the future of game shows could involve strapping on a VR headset.

Ziv Rabinovich, Keshet’s head of gaming and interactive, said “Racket” is a “very scalable” product on which the company can bolt on added features and make them VR compatible without too much difficulty, which isn’t the case with more involved scripted narrative shows — at least, not yet.

“If you want to add content and features, production cost-wise it’s going to be relatively easy,” he told TheWrap. “We are doing it so we know. But if you’re doing a narrative 10- to 15-minute huge scene, that’s not happening — it’s not scalable.”

And game shows are hardly the only genre with untapped VR potential, according to Shtruzman. He envisioned the medium being perfect for a sort of choose-your-own-adventure story that could put the viewer directly in the shoes — and body — of the protagonist.

“There’s going to be a few ways to do a story in VR,” he said. “I think the more natural way to do stories in VR is to do a real first person. In VR, you can actually be the detective. I can see a TV show or feature film done in a first-person perspective.”

But even with stories that aren’t necessarily conducive to a first-person format, viewers will be able to experience them in a much more immersive way in VR, Shtruzman said.

“You watch a show like ‘Homeland,’ you don’t participate in the show but you can actually be on location,” he said.

The last buzzy technological advancement in TV and movies, 3D, ended up being mostly a disappointment, as the market for 3D TVs at home proved to be smaller than manufacturers hoped. (Plenty of blockbusters are still shown in 3D theatrically.) But Shtruzman said VR presents an entirely different value proposition than 3D video.

“I see a big difference between 3D and VR,” he said. “I think the level of immersiveness and the look and feel you get in a VR experience is by far more attractive and compelling than 3D.

That being said, virtual reality today is a highly niche field. PC-based VR systems like the HTC Vive and Oculus Rift cost hundreds of dollars (not including a high-end gaming PC), and the current state of smartphone VR leaves plenty to be desired in terms of quality. But Shtruzman and Rabinovich believe advances in mobile VR technology — which are on their way — will pave the way for more widespread adoption and a bigger market for VR programming.

“We think mobile will be a key element,” Shtruzman said. “I know mobile technology is a little behind but it’s developing so quickly. A year from now we’ll see a much better experience on mobile devices. The gap between mobile VR and PC VR will be much smaller.”

And as technology catches up, Shtruzman is imagining all the types of shows he’d like to create as VR makes them possible.

“We see storytelling where you watch and interact and actually see inside the story,” Shtruzman said. “And also passive 360 where you sit in your chair and put on the headset. I’m sure that I’m only scratching the iceberg.”