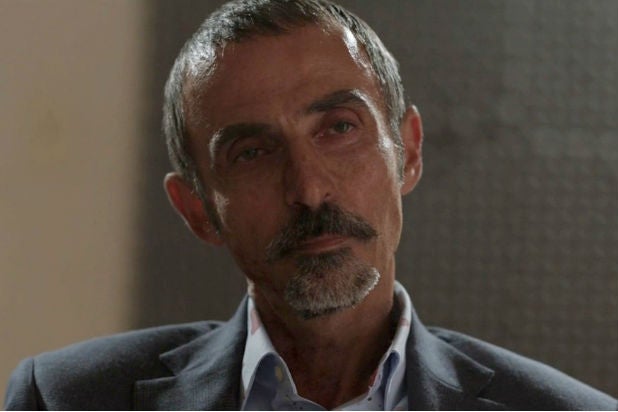 Old friends are rarely welcome when they return in the world of “Homeland.”

Though many fans were happy to see Shaun Toub, the show’s Machiavellian Iranian intelligence chief Majid Javadi, return to the Showtime drama’s sixth season, his presence is not without its consequences.

In his heydey of Season 3, Javadi proved he would do “any and everything to survive,” Toub told TheWrap of his character. Now a double agent for U.S. intelligence, things are no different this time around.

Javadi’s American counterpart Saul Berenson (Mandy Patinkin) is on his way out with an incoming presidential administration, but one of his remaining acts of duty (and a major storyline this year) is to investigate rumors of Iran’s second or “parallel” nuclear weapons program in cooperation with North Korea.

While Berenson and Javadi met on the latter’s turf earlier this year — this Sunday’s episode sees Javadi hit the shores of New York — his return not only sends ripples through “Homeland,” it continues the show’s eerie tradition of mimicking real-life events.

TheWrap: After such an intense fifth season in Germany, it’s easy to forget some of the skeletons in Carrie’s closet. When did you know you’d be coming back, and how is it this time around?

Shaun Toub: Fans have always had a love-hate relationship with this character, and I absolutely wanted to come back in. I felt he was unfinished. I love the fact that he’s so complex and, above all else, he’s a survivor. He does any and everything to survive.

Sometimes you turn [on] people and let them be until you need them. With the world climate and what is going on with politics, it’s very apropos to have Javadi in the mix.

Every year with “Homeland” there’s a moment where the plot seems ripped from the headlines in real-time. Do the writers have a crystal ball?

I’ve got to hand it to them, these writers are so good. “Homeland” always starts very slow and really revs up. Wait for the next three episodes; Javadi is very prominent. Things are going to turn, and it’s a complete surprise. Even my wife, who is fan, was shocked after reading the scripts. The exciting thing is that Javadi is definitely back in the game.

Javadi has spent a bit of time with Saul this season. He’s not the warmest heart.

True. There’s a friendship there, but there is a lot of love-hate between them. There’s a history of my character getting rid of his agents, and a particular sore spot after Javadi assassinated his own wife after Saul helped her secure a new identity in the U.S. But it’s always about the current threat, and Saul reaches out to try to make sense of what is going on.

How do you think Javadi feels about Carrie in the present? The two of them getting together is less likely considering she’s a civilian now.

Javadi has a soft spot for Carrie, I think. Based on Season 3, they basically have evolved into something else. They were sometimes impatient, but sometimes caring. Don’t forget that Javadi was the one involved in Brody’s [Season 1 and 2 villain and love interest played by Damien Lewis] hanging. Javadi really felt for her. It’s very interesting and complex given what these guys do.

So, you tell us, will they cross paths again?

I’ll tell you he’s not expecting to see her, but he’s in New York. You never know what might happen.