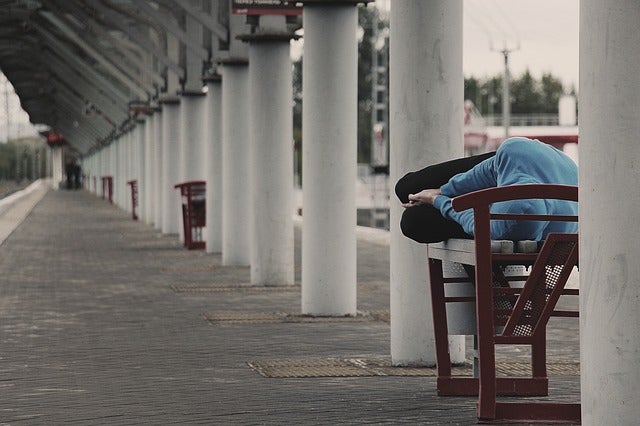 Since we first wrote about Katherine and her two teenage daughters sleeping outside a Coffee Bean and Tea Leaf in Brentwood more than a week ago, we’ve raised an extraordinary $2,000. TheWrap community has been incredibly supportive. However, social services that claim to exist to help families like this — I keep hearing about this terrific, phantom thing called “Rapid Rehousing” — have been missing in action.

The two local organizations, OPCC or The People’s Concern, and St. Joseph — where everyone tells me the people are hard-working and professional — need to do their part. So far a case worker from St. Joseph has failed to show up to two appointments. I’d love to know why. Where’s the OPCC?

Katherine and her daughters are burning through the money we’ve raised at a local motel. Scott and Lori Sale are willing to provide support for longer term housing, but not without the support of a case worker, which is critical. What’s the deal, social services?

My tweets below. Please comment or call these services to pressure them to get a case worker involved, or this family will shortly be back sleeping on the streets.

1/ I'll be tweeting abt #homelessinbrentwood. @thewrap readers stepped up to help, katherine is off the streets. but social services fail

2/continually to do their part. case worker failed to show to 2 meetings. money from donations is burning up. 'rapid rehousing' is service

3/that sounds great but how do u get it? shame on @OPCCLA, St Joseph to let this family go back to streets. $ will run out. where's help?

4/ We've raised $2k for them. We need profesnls to step up. full story, to comment read: https://t.co/DX39OJDh2E … @ThePplConcern

Sunday March 26 Update: Thanks to our friends at Paradigm and Mia Ammer, we have a GoFundMe page for folks to donate to Katherine and her girls. Go here to help:

Update:  The Wrap community stepped up to help homeless Katherine and her daughters. Many readers wrote in to offer their sympathy and suggestions. Lisa Gallant, a manager, extended the motel stay for the family. Lori Sale, who is in artist and brand management, is offering an actual apartment to the family. Many others offered to send money along with contacts for agencies that can potentially assist them.

When I went to tell Katherine the news — and also to let her know that I was a journalist who had written about her – she was sobered and grateful. Her daughters agreed to let me use their names, they are Jessica and Amber. I learned that they have poor eyesight and only Jessica has glasses (which she doesn’t like to wear because she thinks they make her look ugly). Amber’s broke. So they do not see very well, which limits them.

I also learned that Katherine has a storied past in the entertainment industry, but she’s not prepared to talk about it now. I will share that when she is ready. It is a tale worth waiting for, by the way.

Meanwhile, here’s an image of Katherine this afternoon. 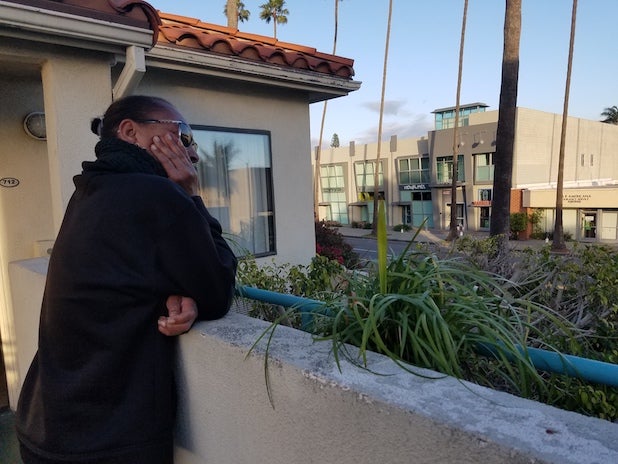 More info when I get it. And incidentally, also coming: an idea about how we might use technology and the combined good will of private and public sectors to help people in this kind of situation.

Meanwhile, thanks to everyone who reached out to help a family of strangers on a Saturday spring day.

I saw them on my way into a restaurant in Brentwood and thought they looked odd. A 40ish woman sleeping beneath an outdoor heater at the Coffee Bean and Tea Leaf at 7:30 p.m. on a Friday night. Beside her were her two teenage daughters, young women slumped against one another in a huddle.

They were still there in the exact same position when I left the restaurant at about 8:45. This time I paused. A family asleep outside a Coffee Bean on Friday night? In Brentwood?

I doubled back and asked if they needed help. The mother had her eyes closed but wasn’t asleep. They were homeless, she explained. She and her 19-year-old twins had nowhere to go.

That seemed hard to believe.

Katherine, that was her name, was well-dressed and articulate, with jewelry on her fingers. Her twins were tall, beautiful girls in hoodies and jeans but their wide eyes said that they expected nothing from anyone. They were charging their cellphones and … just sitting there.

In a resigned monotone, Katherine said that all the shelters were full. That since her daughters weren’t pregnant and none of them were drug addicts, they could not get into city programs. A Veterans Administration facility was less than a mile away on a huge federal plot of land, but they weren’t veterans.

Family would not help them, she said. She had a car up until a few weeks ago but it was repossessed when she learned the payments she’d been making on a friend’s car were going elsewhere.

I asked when was the last time they’d slept in a bed.

If you live in Los Angeles, and especially Santa Monica, you are used to seeing homeless people. (In fact, we have one guy who keeps trying to live at TheWrap’s dumpster.)

But Katherine and her daughters (who I’ve decided not to name because they’re teenagers) were not of that community. They were a family without resources who had just fallen over the edge, trying to hang on to their dignity.

They’re from Lancaster but have friends on the west side of Los Angeles who bailed on a promise to help, they said. The girls said they had been accepted to Santa Monica College for an April enrollment despite their learning disabilities, but could not attend because they had nowhere to live.

As I dialed the local shelters — St. Joseph, Santa Monica’s OPCC Safe Haven on Cloverfield — Katherine told me not to bother as they were full, or closed for the night and she otherwise didn’t qualify for help. My own phone calls determined she was right.

Could I take them to a shelter in downtown L.A.? Ugh, the girls shuddered. Skid Row is too scary. I couldn’t argue.

I called the only person I could think of who might know a solution: Bobby Shriver, the former mayor of Santa Monica and an activist on behalf of the homeless.

There must be somewhere they can go? He named the same places Katherine had and said, in frustration, the situation was “deeply offensive.”

The irony of the moment was not lost on me. On the very day when Obamacare was saved, at the moment when a critical national social welfare net was preserved, this family could not be helped.

Also Read: 9 Movies to Remind You How Bad US Health Care Used to Be - And Might Be Again

Katherine and her family were at the point of despair, and who could blame them? They had given up. All of them were capable enough to work, but even as I started to ask this question I realized — you can’t work if you have nowhere to live. They were just clinging to the edge of survival.

The twins told me they hadn’t eaten in two days. “We drink a lot of water,” one of them said.

In frustration but unwilling to leave this family on the streets, in the end I got them some food and checked them into a motel for the weekend. It felt like a pathetically inadequate gesture, but all I could think to do.

So at least I wanted to share the story with you. That much I can do. If you know of resources I don’t, please put them in the comments. If you have other ideas to offer those liberal folks who represent our city and state —  L.A. Mayor Eric Garcetti, Rep. Ted Lieu, Sen. Kamala Harris, Santa Monica Mayor Ted Winterer — do it.

As a society, losing Katherine and her family to the abyss of marginality is a senseless waste. Also immoral. A democracy should support the basis of human dignity. A little help, a little support, a place to pull it together would go a long way for this family.

So while we may celebrate the GOP’s failure to overturn Obamacare and the 24 million people who get to retain health care coverage, let’s remember all of the work we have to do as a city, a country and a society. For Katherine and her girls.