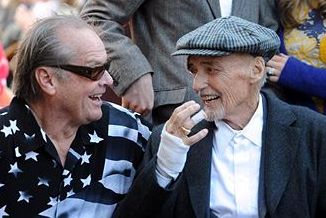 Dennis Hopper on Friday received his star on the Hollywood Walk of Fame, right where he wanted it, in front of the Egyptian Theater.

Hopper, 73, has been battling prostate cancer and is reportedly terminally ill. Bandaged and looking gaunt, he nonetheless sounded strong when he addressed the crowd, according to an eyewitness.

He explained that the bandages were due to a fall at his home. A paparazzi shouted his name, he said, and he turned toward the man, thinking he knew the voice; that threw him off balance and he fell.

Hopper thanked Hollywood for being "my home and my schooling."

"He was a trooper," said one attendee. "He didn’t speak like a man who knew he wasn’t long for this world.

"He acknowledged his family when he finally got up to speak," she added, especially his son-in-law.

According to Leron Gubler of the Hollywood Chamber of Commerce, which presents the stars, Hopper’s ceremony drew an unusually large number of celebrities and fans.

Mortensen read a poem he had written in honor of Hopper.