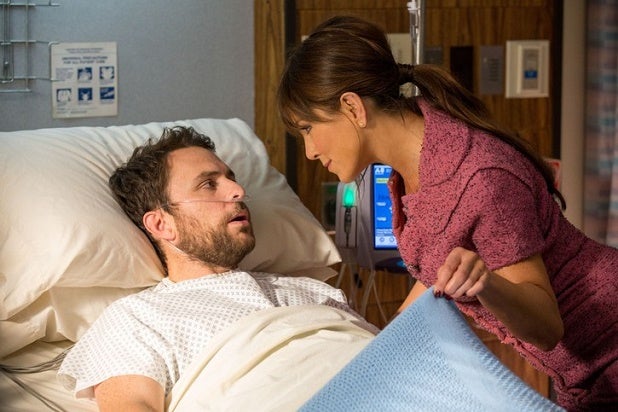 Thanksgiving is traditionally a family time of year, with relatives and friends gathering round the table to share sumptuous feasts and kick off the holiday season.

So was it really surprising that “Horrible Bosses 2,” rated R for “crude sexual content and language throughout,” didn’t connect with holiday moviegoers this weekend?

New Line’s comedy sequel took in a disappointing $22.8 million over the five-day Thanksgiving weekend at the box office. That was about $10 million under projections, and roughly what the original film did in its three-day opening in July of 2011, on its way to $210 million worldwide haul.

History suggests we shouldn’t have been shocked that the ensemble comedy didn’t click, despite a starry cast including Jason Bateman, Charlie Day, Jennifer Aniston, Jamie Foxx and Jason Sudeikis.

There’s never been a really good opening for an R-rated comedy on Thanksgiving. That “Horrible Bosses 2” established a new record — ahead of the $12.3 million that “Bad Santa” debuted with in 2003 — says plenty about how tough it is. But really, why?

“There’s never a problem at Christmas,” noted Dan Fellman, Warner Bros. distribution chief who chose the Thanksgiving release and admitted it was a bit of a gamble. “Django Unchained” and “The Wolf of Wall Street,” two films that very much earned their R-ratings, both scored at Christmas recently and many others have as well.

Did the prevailing focus on family really make a difference?

“I think it hurt a little,” said Fellman. “But this was always going to be counter-programming, and it will be in the weeks ahead.”

In fact, “Horrible Bosses 2” had more working against it than bucking the warm and fuzzy moods of holiday moviegoers.

The critics weren’t keen on it — with a weak 35 percent positive on Rotten Tomatoes — and the marketing campaign didn’t seem to differentiate it much from the original. That’s a good thing in terms of connecting with fans of the first film, but it’s not necessarily enough to get someone out of the house and into the theaters. And there was some competition.

“I don’t think you can write off the holiday having an impact, but I think ‘Dumb and Dumber To’ stealing its thunder was more of a factor,” said Phil Contrino, vice president and senior analyst at BoxOffice.com. The Jim Carrey-Jeff Daniels comedy did about half the business that “Horrible Bosses” with $11.6 million over the five days, but drew from the same demographic target.

Also read: Michael B. Jordan on 'Fantastic Four' Racist Backlash: 'It Was Expected'

The overall box office is slumping, too. The weekend’s other wide opener, DreamWorks Animation’s kids film “Penguins of Madagascar,” also came in under expectations.

Fellman and Warner Bros. have won their bets on expanding the traditional release corridors before. They rolled out “Gravity” last year in October and that film’s $55 million opening was the best ever in that month.

“Horrible Bosses 2” was produced for a reasonable $42 million, so it should eventually find its way into the black. Paramount’s Chris Rock R-rated comedy “Top Five” doesn’t debut until Dec. 12, so “Horrible Bosses 2” can take another run at it this weekend.

But if you’re a moviegoer that wants to see the studios break out from standard release patterns so that gluts are avoided and more good movies are in theaters more often, you can at least appreciate Warner Bros. giving it shot.

“It’s going to work at some point,” Contrino said.