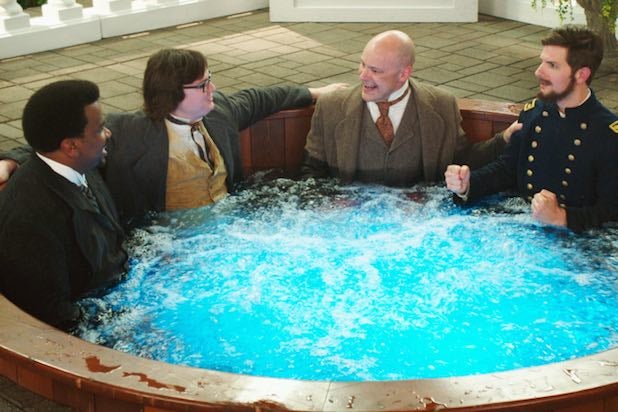 Critics overwhelmingly agree that audiences should save their time and money instead of buying a ticket to see “Hot Tub Time Machine 2” this weekend.

“There’s another time problem here: namely, the minutes that drag between one laugh and the next,” Duralde wrote in his review. “That dragging journey from minute to minute grows so oppressive that it sinks the entire experience. Anyone who makes a movie about a hot tub that’s also a time machine clearly thinks he’s making something smart enough to play off of such a stupid premise, but returning director Steve Pink and screenwriter Josh Heald get only the stupid part right.”

On the flip side, Jemaine Clement’s vampire mockumentary “What We Do in the Shadows” debuted in limited release this weekend to a whopping 94 percent “fresh” approval rating from critics, including Duralde, who found it “so cleverly funny and unexpectedly humane.”

In the interest of giving audiences a fair warning to stay out of dirty water, here are 10 more brutal reviews of “Hot Tub Time Machine 2.”

“Director Steve Pink is back, along with most of the cast from the first film. But — this is crucial — Cusack is gone, and so is all the charm and heart. ‘Hot Tub Time Machine 2’ is a movie that didn’t need to be made, and certainly doesn’t need to be seen — not when you can rent the original and still feel good about yourself afterward.”

“The script teeters between such pathetic attempts to be outrageous and total imagination breakdowns, like calling a wacky version of ’60 Minutes’ ’59 Minutes,’ comparing a bald guy to a cue ball or randomly having a sexy girl walk by topless. And the insults flying among the guys are so mean-spirited you wonder why any of them are friends in the first place. If this movie were an ’80s band, it wouldn’t be Mötley Crüe. More like Poison.”

“Who left the turd in the hot tub? Five years ago, I gave ‘Hot Tub Time Machine’ four stars, relishing its funny blend of dude-where’s-my-life? humor, wacky retro riffs and dumb-smart gags … Witless, and unoriginal at every turn, ‘HTTM2’ makes me wish I could use the supernatural bathtub myself and kill this project before it got green-lighted.”

“Steve Pink’s direction doesn’t help matters. Literally, it does nothing to help save what was once a generally funny premise that has gone horribly wrong with this sequel. With humor that makes ‘Bill & Ted’ seem intelligent, this sequel is pretty much garbage. We had to wait five years for this?”

“I hated ‘Hot Tub Time Machine 2’ so much I now can’t even think about the first one without feeling annoyed. This may suggest that the only solution is to go and make a third one to rescue the franchise, but really it may be time to leave well enough alone. The main problem is the writing. The first film had at least a modicum of drama — returning to a high school ski trip where bad decisions still resonate. This sequel has nothing to offer other than than “our gang of idiots go to the near future”

“Nothing about this movie adds up, apart from the aforementioned penis jokes, profanity and vile homophobia, which pile up like dirty dishes at a frathouse. All of which make ‘Hot Tub Time Machine 2’ an early candidate for worst sequel of 2015 and also worst movie. Good on Cusack for spotting this sloshing cesspool and staying well clear of it.”

“It’s easy to see why John Cusack took a flyer on the new D.O.A. sequel, ‘Hot Tub Time Machine 2.’ It’s a comedy that’s so witless and unfunny and shoddily made it makes ‘The Hangover 2’ look like ‘The Godfather 2.’ The 2010 original, which was pretty threadbare to begin with, at least had the nudge-in-the-ribs pleasure of seeing Cusack warp back to the decade and genre he got his start in via a mystical Jacuzzi. Without him, though, the whole enterprise pretty much goes up in smoke. It has no reason to exist other than as a shameless cash grab.”

“Unless the idea of a half-naked Rob Coddry acting like the worst human being imaginable (a far cry from the occasionally sympathetic version of the character seen the first time around) for 90 minutes strikes you as comedic gold, ‘Hot Tub Time Machine 2’ is pretty much a total waste of time and energy. It looks cheap, the story is little more than a string of haphazardly constructed scenes with little to offer either narratively or comedically, the characters are far more irritating than endearing this time around and without Cusack’s laid-back presence to ground things.”

We Got This Covered critic Matt Donato

“‘Hot Tub Time Machine 2’ is just another effortless sequel, marred by a hopeful recycling of what seemed to work in the past. A major part of the equation is missing this time around (Cusack), but simply multiplying the other factors can’t mask an end result that fails to strike a similar amount of lovable debauchery.”