Angelina Jolie, Tom Cruise and Julia Roberts are not the only ones likely to be upset at the news that one of Hollywood’s most iconic and beloved hideaways will disappear, at least temporarily, with the closure of the Hotel Bel-Air at the end of September.

The announcement was made unexpectedly to the hotel’s staff on Friday, who were informed that they would be laid off as of September 30. Guests are being informed with a letter as they check in.

Due to the scope of a “major refurbishment,” said the letter, “the decision has been made to close the hotel on September 30, 2009 so we do not inconvenience any of our guests while the renovation is taking place.”

The letter said the hotel, which is owned by the Sultan of Brunei and managed by the Dorchester Group, would be completed toward the middle of 2011. The renovation will include an updating of all 91 rooms, and the construction of a vast new spa and 12 new villas on the property. A spokeswoman for the hotel did not return a message from TheWrap seeking comment.

The historic hotel – which is not officially classified as a landmark – is an icon of Hollywood and Los Angeles history, famed for its swans, its mission-style architecture, its unique rooms and for the generations of movie stars who have sought refuge and held trysts in its tucked-away spaces.

One of Marilyn Monroe’s most famous photo shoots with Bert Stern took place there in 1962 (see image), and so did a recreation of the shoot with Stern and Lindsay Lohan last year (see image).

Elizabeth Taylor honeymooned here with her first husband, and the story goes that Lauren Bacall flooded the hotel during the Academy Awards.

The staff is somewhat legendary for accomodating the unusual demands of celebrities, such as a seventeen minute wedding between Ronald Reagan’s daughter Patti and her yoga instructor. 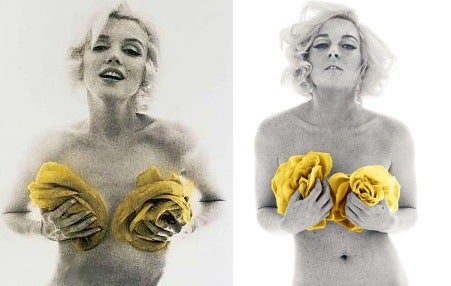 And in an industry famed for stalkers and paparazzi, the hotel is known for its discretion.

A-list stars are known to take up residence there, but there are probably lots of others in the entertainment industry who will be equally disappointed.

“It’s so sad to me,” said Sherry Lansing, the former CEO of Paramount Pictures, who like many Hollywood power players lives nearby. “It’s like the loss of a dear friend. It’s always been one of the most beautiful hotels in the world to me.”

The Bel-Air was built as Bel-Air Estates in 1922 by Alphonso Bell, 60 acres of lush gardens, meticulously maintained north of Sunset. The gardens are among the most famous among southern California hotels; containing more than 200 botanical species, including a 60-year-old lonchocarpus tree that spreads in a canopy over the restaurant’s outdoor space.

The hotel has changed owners and undergone renovations over the years, but none this extensive.

Extensive additions were made in 1982 when Rosewood Hotels and Resorts bought the hotel for $23 million. The Rosewood sold the hotel for more than $110 million a decade later.

The Brunei Investment Agency, which also owns the Beverly Hills Hotel and redid that property, conducted a $20 million renovation of the Bel-Air in 2003, according to the hotel’s promotional materials.

The letter to guests signed by general manager Tim Lee did not mention whether the “major refurbishment” would fundamentally retain the historic character of the hotel.