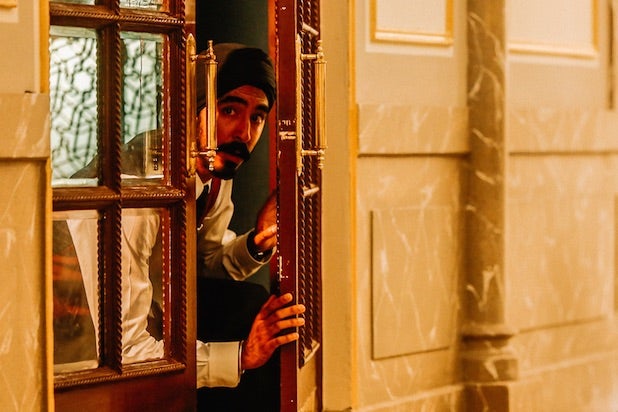 In the first moments of Anthony Maras’ Toronto premiere “Hotel Mumbai,” a maitre d’ inserts a thermometer into a marble bathtub littered with rose petals. Disappointed, he orders his staff to increase the water temperature to suit an incoming guest’s preference.

Twenty minutes later, in the same room at the luxurious Taj Mahal Palace Hotel, an old woman seeking refuge from a highly-coordinated terror attack is shot in the head and dies slumped next to a toilet. Her blood runs as red as the roses still floating 30 feet away.

These contrasting images — supreme luxury and explicit execution-style killings — are seen over and over again in this telling of the real life 2008 attacks on the Indian city.  Specifically, the grueling and unspeakable seizing of the Taj Mahal Palace Hotel and the heroic struggle of its staff and guests to survive.

Dev Patel, Armie Hammer and unexpected powerhouse Nazanin Boniadi lead the ensemble, which we might call a thriller were the action not hauntingly real and senselessly tragic. The characters populate the hotel’s front and back of house, painting small and human stories which are ultimately interrupted by a group of four young extremists carrying out a suicidal terror mission.

It cannot be overstated how relentlessly the killings unfold: a backpacking couple paying their check in a cafe witness a bullet tear through the head of their waiter; beaming, well-kempt hotel receptionists are sprayed with semi-automatic weapons; a wealthy, defiant magnate meets a grisly end trying to fight his way to safety.

While devastating, and at times too much for the premiere audience at the Princess of Wales to bear, Maras is confident and unflinching in this portrait of the “mindless” terror, as one news report played in the film said. He is also masterful in delivering a range of emotions (including laughs, mostly thanks to an icy playboy portrayed by Jason Isaacs) and other small rewards for viewers stepping up for this real-life nightmare. There’s also impressive use of suspense here, as innocents weigh their escape options. This includes an excruciating scene where a nanny tries to muffle a crying baby.

After the terrorists storm the Taj Palace lobby, VIP guests dining in the first floor restaurant are ushered to a private sixth-floor lounge reserved only for VVIPs called The Chambers Club.

“The Chambers Club is windowless and very hard to access,” the head chef reassures guests who don diamonds and Patek watches.

“You’re safe now, sit anywhere you’d like!” echoes the maitre d’ from the bathtub scene, a blatant lie that reinforces misconceptions about money and safety.

Patel, who plays a waiter, shines in a scene inside the Chambers Club. A stuffy English guests tells a manager she is made “nervous” by Patel’s beard and turban (called a pagri). It’s a bigoted fear, that Patel might be affiliated with the terrorists six floors below.

The manager asks him to hide in the kitchen for a while, as the English woman calms down. Patel refuses, and approaches her with his cell phone. He shows her pictures of his expectant wife and their daughter. He explains that his pagri is a symbol of bravery and respect, and he has not left the house without wearing it since he was a child.

But, he says, in the Taj Palace she is his guest, and he will remove it if it makes her comfortable.

Patel agrees “we all are,” but if they are to survive, “we have to stick together.”