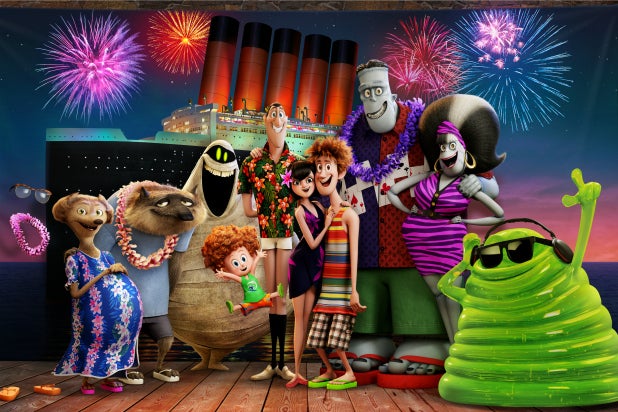 While Disney and Pixar animated films tend to have budgets well-above $100 million, Sony kept the budget for this film to a relatively thrifty $80 million. Overseas, the film made $54.8 million from 42 markets, giving “Hotel Transylvania 3” the biggest global launch for a Sony Animated film, as it opens 31 percent ahead of last year’s July animated release, Pixar’s “Cars 3.”

The film is also on pace to top the global run of “Hotel Transylvania 2,” which made $473 million worldwide. Distribution officials at Sony note that with kids out of school, mid-week numbers should be significantly higher than the previous “Transylvania” installments, which came out in the fall.

“Previous animated July releases like ‘Cars 3’ made 28-32 percent of their gross from weekday screenings,” said Adrian Smith, Sony’s domestic distribution president. “July is the one month of the year where 100 percent of kids are out of school all month, and with the word of mouth we’ve received, we’re expecting the first six days of ‘HT3”s run to exceed the first two films.”

Meanwhile, Universal’s “Skyscraper” has failed to meet tracker expectations, falling to a $25.4 million opening weekend against a $120 million budget co-financed with Legendary Pictures. Trackers were expecting a $35-40 million start, which would put it on the same level as the $35 million opening for Johnson’s “Rampage.” Instead, “Skyscraper” will just beat the four-day opening for Johnson’s 2017 comedy “Baywatch,” which opened on Memorial Day to $23 million.

“Skyscraper” now faces a tough road to profitability, even with Universal sharing production costs with Legendary. A domestic run well-below $100 million is practically assured with this opening, and overseas performance hasn’t been much better. Though it has opened in more markets than “Hotel Transylvania 3,” “Skyscraper” finished much lower on the global charts with a $65.9 million global launch from 57 markets, with Korea being the top market with just $4.6 million. Legendary East is handling distribution of the film in China, which will get it next weekend.

Johnson, who has released five films in 14 months, will now take a break until the release of “Hobbs & Shaw,” another film from Universal, which will come out next July.

On the Disney front, Marvel’s “Ant-Man and the Wasp” took the No. 2 spot, falling 62 percent from its $76 million opening to make $29 million in its second weekend. Though that is one of the steeper drops for a Marvel release in recent years, the film’s 10-day domestic total of $133 million is still 25 percent ahead of the pace for the first “Ant-Man.” Globally, the 20th Marvel Studios film now has a total of $284 million, with openings in Western Europe still to come next week.

“Incredibles 2,” meanwhile, continues to perform well with $16 million grossed in its fifth weekend. It now enters the top 10 on the all-time domestic charts with $535 million. The film is also on its way to reaching $1 billion worldwide, with a global total of $857 million and releases in Japan and Western Europe still to come.

“Jurassic World: Fallen Kingdom” is tied with “Incredibles 2” for the No. 4 spot on the charts this weekend, also grossing $16 million to push its total to $363 million. Globally, the film now has $1.13 billion in the bank, entering the top 20 highest grossing films of all-time.

Finally, Annapurna’s “Sorry to Bother You” began its wide run this weekend after a week in limited release, earning $4.3 million from 805 screens to finish seventh on the charts. The Boots Riley film now has a total of $5.3 million.