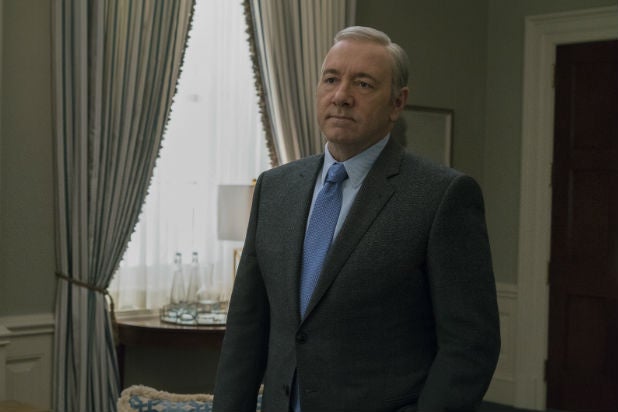 RIP Frank Underwood: The new “House of Cards” teaser leaves no doubt that he has joined his ancestors in the ground.

A preview for the sixth and final season of the Netflix political drama dropped Wednesday, showing the series’ new president, Claire Underwood (Robin Wright), talking to her husband — her deceased husband.

Yes, we now know that Frank (Kevin Spacey) is gonna be dead as a doornail when “House of Cards” returns with its last batch of episodes on Nov. 2.

“I’ll tell you this though, Francis,” Claire says in the 25-second clip while standing outside, looking down.

“When they bury me, it won’t be in my backyard,” she continues. “And when they pay their respects, they’ll have to wait in line.”

As Claire begins to walk away, the camera cuts over to two tombstones, Calvin Underwood (Frank’s father) and Francis Underwood, with the latter’s year of death being 2017, when “House of Cards” Season 5 ended. Cause of death is TBD — at least to viewers.

Also Read: Robin Wright: 'House of Cards' Was 'Very Close' to Getting Axed: 'I Believed We Should Finish'

The video, which was tweeted by the show’s official account early in the morning, was accompanied by the message, “You should have known.” Yeah, OK, we probably should have.

After all, fans knew Spacey was booted from the sixth and final season when sexual misconduct accusations against him surfaced last fall, both on and offset.

During a recent interview with Net-A-Porter, Wright said that the political drama was “very, very close” to getting canceled by Netflix. “Because of the climate at that time. The air was thick, you know. Harvey Weinstein… People were [saying], ‘We have to shut everything down or otherwise it will look like we are glorifying and honoring this thing that’s dirty.'”

Also Read: Robin Wright Believes Kevin Spacey Deserves a Second Chance: 'Every Human Being Has the Ability to Reform'

Eight employees filed sexual harassment claims with Netflix and “House of Cards” production company MRC last November, CNN reported at the time. One unnamed production assistant said he was assaulted after being assigned to drive Spacey to and from the set, and later told the outlet he was “cornered” by the actor in his trailer. In addition to misconduct on the show, Spacey was accused of making advances on Anthony Rapp, a Broadway and film actor, when the latter was underage.

The final season of “House of Cards” will center on Wright’s Claire Underwood. Wright fought with Netflix executives for the show to be able to get a chance to end on its own terms. “I believed we should finish. I believed we should honor our commitment.”

The sixth and final season of “House of Cards” drops Nov. 2 on Netflix.

You should have known. pic.twitter.com/UFGplyDSY1