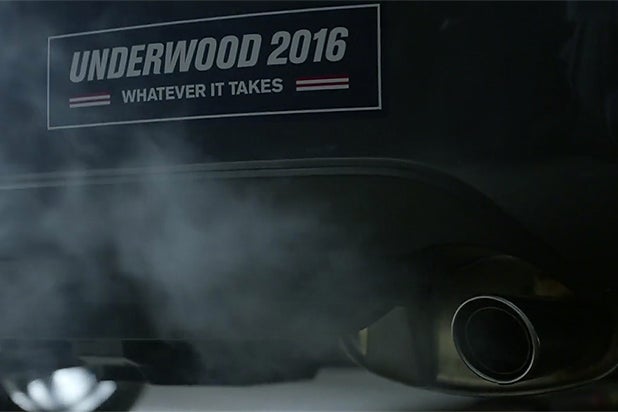 Netflix’s “House of Cards” Season 4 teasers seem to be going through all the people Frank Underwood (Kevin Spacey) has murdered in his quest for power, and the latest gives a callback to Victim #1.

The 20 second video focuses in on a car exhaust blasting out toxic fumes as an “Underwood 2016: Whatever It Takes” bumper sticker comes into view and then a garage door slams shut.

Rep. Peter Russo (Corey Stoll) proved to be a major roadblock for the Underwoods in Season 1, and after manipulating him ad destroying his life, Frank left him to suffocate in his garage, making it look like a suicide.

It was Underwood’s first kill, but not his last. And now he’s running for re-election.

Also Read: 'House of Cards' Renewed for Season 5 by Netflix

Ahead of its Season 4 premiere, Netflix renewed the show for a fifth season, set to premiere in 2017.

“House of Cards” returns for Season 4 on Friday, March 4 on Netflix.