As Marty Kaan and his ruthless employees prepare to close up shop at Kaan & Associates on Showtime’s “House of Lies,” cast members including Don Cheadle, Kristen Bell and Ben Schwartz got a little nostalgic as they looked back on their five years together.

Ahead of Sunday’s series finale, TheWrap caught up with a few of the charming and ambitious corporate consultants as they made one final deal.

What was the biggest job perk? Which cast member was the greatest distraction? What happened to Don Cheadle‘s Tesla?

Also Read: Showtime's 'House of Lies' to End After 5 Seasons

See the answers to these questions and more in a new edition of TheWrap’s “Exit Interview.” 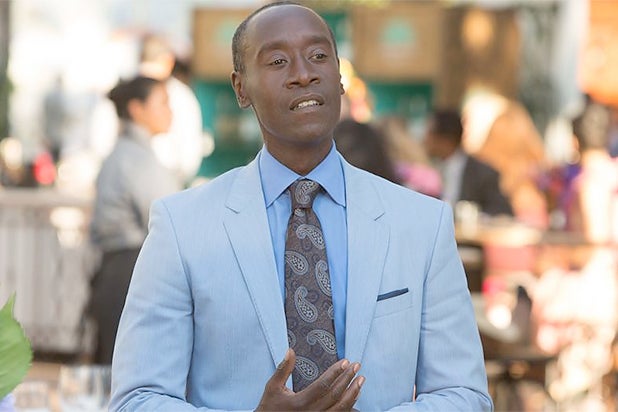 Describe your workplace environment …
I couldn’t have hoped for a better place to show up to “work” every day. In front of and behind the camera, we all laughed, hugged and grinned our way through our very lucky five years together. An incredibly special experience. I will miss it.

Was your Wi-Fi signal sufficient?
When Kristen Bell‘s 1,500 devices were offline, yes.

Was your parking space sufficient?
Given that I parked wherever I wanted, including sometimes in Ben or Josh’s trailers, I’m going to say, yes.

Were your own expectations of the job met? How?
My expectations were far surpassed. Real Talk. I’ve never had as much consistent fun in my professional life as I had working on this show. From the producers, writers and directors, to the incredible cast and guest stars we had the good fortune to attract — everybody was down for the long hours that are part and parcel of TV production because we were such fans ourselves of the material and the characters.

What’s one thing you were asked to do, but couldn’t pull off?
I pulled off everything! Including my clothes week after week.

What co-star was the biggest distraction?
They all were equally distracting when they made the grave error of making eye contact with the Big Cat (that’s me). But never more than once. Once.

Did you take any memorabilia or tokens from the set?
What are you trying to say?! You ask EVERYBODY this question or just the black cast members?!?! How dare you!

Also Read: 'House of Lies' Season 5 Teaser: 'The Pack Is Back' (Video)

Any summer plans?
Not gonna pour ALL the summer tea but do the words “Write-in presidential candidate” mean anything to you? #I’mWithDon 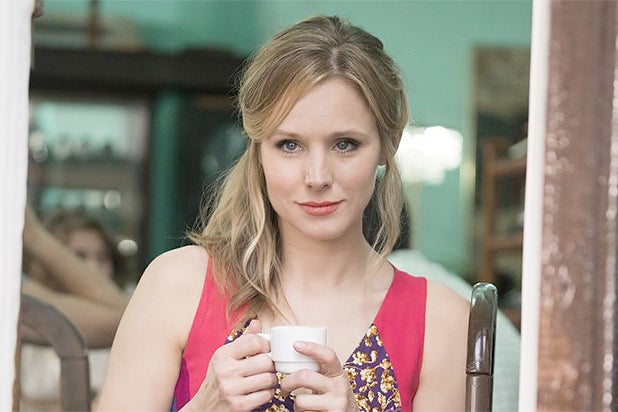 Describe your workplace environment …
Our work environment was a kin to a preschool playground. Lots of giggles, lots of snacks, and very few people, if any, listening to authority.

What are your favorite and least favorite pieces of wardrobe worn on the show?
I loved all of my wardrobe on the show. I don’t wear more than jeans and a tee-shirt in my real life, so it was fun to have gorgeous outfits that made me feel sexy and ladylike.

Was your Wi-Fi signal sufficient?
Absolutely, and I thank the management consulting gods that it was.

Where do you see Jeannie and Marty in five years?
I think Marty and Jeannie were built to build, whether that means their company or their family, or both. I think in five years they may have another kid, and I definitely think at least one of them will have gone back to work in some capacity. I think they would be lost without the stressful work environment they are both so drawn to.

Also Read: Don Cheadle on Why Jeffrey Tambor Should Win the Emmy and 5 Other Nominee Questions

Did you take any memorabilia or tokens from set?
I would have loved to have taken Don, Ben and Josh home with me. Having those three boys around, especially during my pregnancy, made me laugh consistently and made work not feel like work at all.

Sadly they are autonomous human beings who claim they all have “lives” of their own, so they are unable to move into my house and continue to entertain me all day. 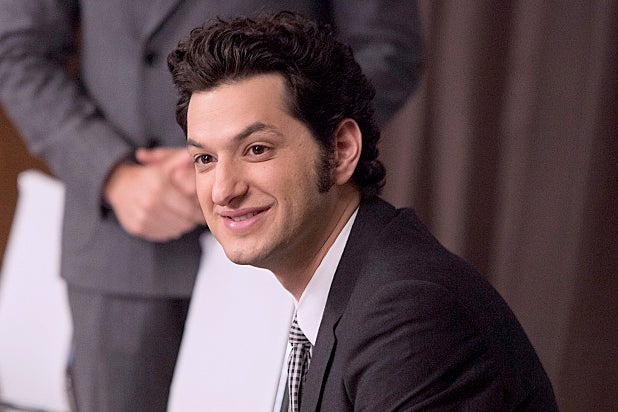 Describe your workplace environment …
Our workplace was incredible and fun because we all truly loved each other. It’s why the cast and crew became so close. We looked forward to seeing each other every day for 14 hours. We were lucky because the writers and directors gave us amazing words to play with and allowed us to take risks and improvise. I’m going to miss this show. It’s crazy that I don’t get to call Cheadle “daddy” on screen any more.

Was your Wi-Fi signal sufficient?
This is an amazing and important question. When we were on our stages, our Wi-Fi connection was only good in certain areas. When we were in our trailers, we had to get personal hot spots. But I think not having Wi-Fi in certain areas made it even more convenient for us to spend human being time with each other. Thank you for asking the important questions.

Also Read: 'House of Lies' Renewed for Season 5 by Showtime

Were your own expectations of the job met? How?
When I took this job and saw who was involved, all I wanted to do was learn from everyone around me. We had some of the best actors, directors, writers and crew in the world and I feel really fortunate that I got to absorb everything they did. I also took the job with the hope of tackling more dramatic scenes, which I got to do every single season thanks to our amazing writing staff. My character found love, battled a drug problem and an abusive father … which led to me killing my father with a monologue and the coolest of them all, I got to go toe-to-toe with Marty (who was played by Don Cheadle) so I feel incredibly fortunate that I got to stretch out a bit.

What scene did your character never get to do that you wish he had?
It would be cool to see a scene of Clyde in his personal life without family, work or friends and see what he really does all alone. I always thought he was an incredibly dark and sad person, so to see that side would have been interesting. Also selfishly, if we had a few more seasons, it would have been fun to see Clyde as the boss of his own company. He always had his eyes on the top position no matter who he was working under, so it would be interesting to see what would happen if he was finally the top dog.

Did you take any memorabilia or tokens from set?
I have some suits, the soccer ball from the Matt Damon episode and a perfume bottle from the Dushkin episodes with an alternate name on the front.

What’s one thing you were asked to do, but couldn’t pull off?
I don’t know if there was something that any of us weren’t able to pull off. We luckily were able to tackle all the words and scenes thrown at us. Thank you to the writing staff for not having a scene where I had to do 30 pull ups in a row.

Best job perk?
Playing with this cast and crew. I will miss it so much. Truly. 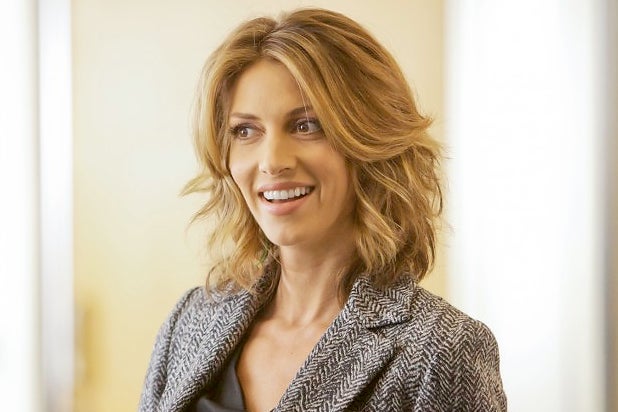 Best job perk?
The pedigree a smart show offers. Having most of my scenes opposite Don Cheadle wasn’t such a bad deal either;)

Favorite craft service food item?
Anything organic. We had a great caterer on set. He really did his best to do it right.

Did you meet your own expectations of the job? If yes, how? If not, what would you do differently?
You can’t ask this question to the girl that plays Monica. I wanted the whole show. Every episode. I wanted to steal Marty away. Never got that chance. I will have to do it in my next show.

What scene do you wish you could’ve played on “House of Lies,” and with which costar?
I think there was a scene where they did Ayahuasca (powerfully psychedelic South American brew). Or maybe they were high on Ketamine. I’m not sure now, but either one of those would have been fun.

What costar was the biggest distraction? Joking, tweeting, goofing, etc
Everybody was always joking always professional. working with talented cast mates you get a lot of wit and a lot of love. And come to think of it, there was an awful lot of card playing that was always going on. 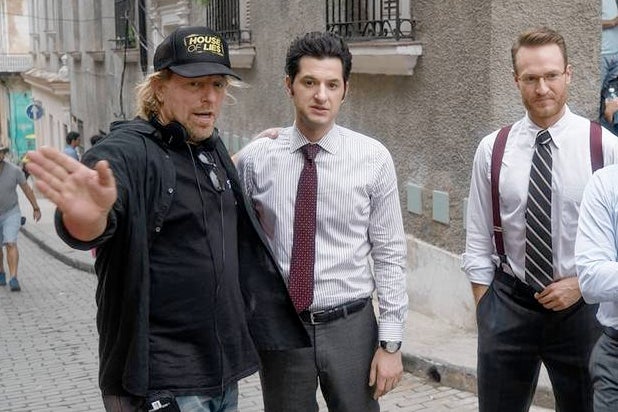 Was your parking space sufficient?
Sweet. Had my name an’ all.

Were your own expectations of the job met? How?
They were met and surpassed because I got to work with my heroes everyday … Cheadle, KBell, Josh and Ben, the supremely talented David Walpert and the writers in our small but air-conditioned room …

Did you take any memorabilia or tokens from set?
I took Don Cheadle‘s Tesla, but he doesn’t know, so please don’t print this one.

Any summer plans?
Sit in quiet contemplation of the untold blessings the Universe has bestowed upon me. Nah. Gotta write new stuff.

Who was your favorite character to write for?
Doug (Josh Lawson). He makes me smile and cringe.

What was a line you wish you had written?
Marty: Don’t ever take the black bait.
Although I’m credited, Cheadle improvised that s–t.

The “House of Lies” series finale will air on Sunday at 9 p.m. ET on Showtime.