NBC News ruined “Access Hollywood’s” plan to release a recording of Republican nominee Donald Trump talking about wanting to “f—” a married anchor on the syndicated show by leaking the full tape, according to an individual close to the situation.

“Somebody at NBC News or the ‘Today’ show leaked the tape, it wasn’t anybody at ‘Access Hollywood,'” the individual said. “It wasn’t supposed to be released. That was not supposed to happen.”

An NBC executive denied the charge to TheWrap, saying that the network had no interest in seeing the story leaked elsewhere, and was planning to post its story after ‘Access Hollywood’ ran theirs.

Bush is heard throughout the tape agreeing with Trump and even egging him on. Indeed, “Access Hollywood” seems to attribute a quote to Trump in that exchange that the Washington Post attributes to Billy Bush.

When Trump brags that when you’re a “star,” you “can do anything,” another voice agrees, saying “whatever you want.” Trump then follows up with “Grab them by the p—y. You can do anything.”

The Post attributed the interjection to “another voice, apparently Bush’s,” but “Access Hollywood” attributes all of it to Trump. 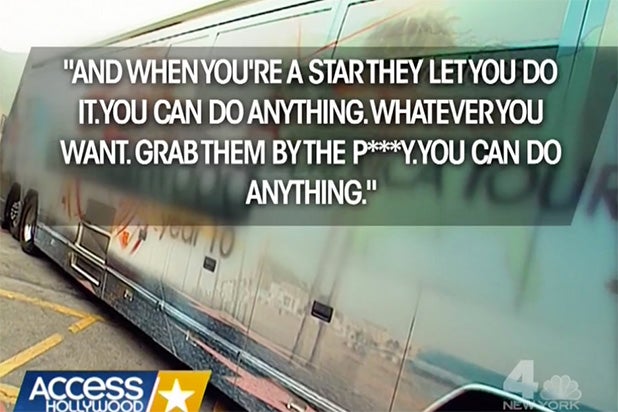 “Access Hollywood” aired portions of the crude remarks by the candidate on Friday night, but edited out the segments that made their own then-host look bad. Bush is now a host on NBC’s “Today” show, and “Access Hollywood” executive producer Rob Silverstein was said to be furious at NBC News and has made his displeasure known at 30 Rockefeller.

The news has thrown the presidential election into yet another spin cycle of media turmoil, with Trump offering a near-apology and Billy Bush — Jeb Bush’s cousin — saying he was “embarrassed” in a statement to the media.

The tape came to light, according to one insider, when producers at “Access Hollywood” saw Trump’s mockery of former Miss Universe Alicia Machado last week, and then again read about crude remarks he made about women when on “The Apprentice.”

“Somebody remembered internally that we might have something,” the insider said. Producers and editorial assistants went through “hundreds” of tapes, until they found the tape of Trump bantering with Bush on a bus on the studio lot after an interview.

Also Read: Why David Letterman Thinks Donald Trump Is a 'Damaged Human Being'

“We listened to it, we thought: OK, this is relevant to what’s going on right now.”

But the show apparently sought to protect its former host Billy Bush by editing him out of the tape.

“Access Hollywood” also edits out this exchange about one of the “Days” actresses:

“The full tape of everything wasn’t going to come out,” the individual said. “The fact that somebody leaked that is problematic.”

Nancy O’Dell was called in advance of the “Access Hollywood” show to warn her. She had no idea that Trump had boasted about trying to go after her sexually and the individual said she was “in shock.”