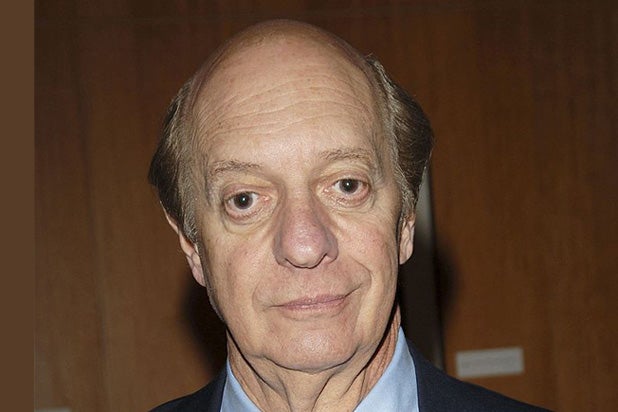 The lobby bar at the Loews Hotel in Santa Monica, California, during the week of the American Film Market is not for the faint of heart. Imagine the Mos Eisley bar scene from “Star Wars.” Replace the aliens and black marketeers with producers and distributors. Cantina creatures and the willowy gauze of Jedi robes? Think more Rite Aid sunglasses and Nordstrom Rack knock-offs. Those hushed conversations were not about planetary uprisings. They were about projected residuals.

And, amidst this sea of cacophony sat not Yoda … no. Serenely holding court was actor Basil Hoffman. Impeccably dressed and coifed, Basil’s presence was an energy, and I was drawn to it.

Your first chance encounter with Basil might elicit a quizzical look and a feeling of deja-vu. Where have I seen him before?

Also Read: How a Trump Presidency Would Change American Film Industry: 'Maybe We Shoot in Canada'

Then, realization washed over me: Yes! “Seinfeld!” The guy that fitted George for a toupee while Jerry was delivering a biting critique of George’s new “look.” Yeah, and that guy … the salesman. He was funny. Not just funny funny, but funny explosive. A reaction to Jerry that began muted and professional, then suddenly manic. Basil’s character went from demure to demented within seconds — seamlessly. One of those memorable moments in television recalled with “remember that time on ‘Seinfeld …'”

Basil was holding court with a group of young filmmakers. Each one of them looked up to the genial thespian. I ventured a question, and asked Basil how it all started for him.

“When I came to Hollywood in 1974, I couldn’t get an agent,” Basil said in his characteristic and familiar droll baritone. “So, I started calling casting directors, and I met a lot of them. I actually met 44 casting directors in six months. One of the casting directors, Tom Jennings at Warner Bros., said to me ‘Basil, I know you don’t want an agent. You’re going to work a lot in this town, but you’re not going to do my show. Without an agent we’re gonna rip you off.'”

Basil had my attention as he began to address a lament that is familiar to almost all new and aspiring actors. “Now parenthetically, the reason he said I’d never do his show was because he was casting a martial arts Western called ‘Kung Fu.’ It was all stunt men, Western types and martial arts types and all that. And he was wrong, because two weeks later he had to cast a telegraph operator, so I did Tom’s show after all.

“Tom then introduced me to an attorney named Hurley Graffus whose clients included Burl Ives, Cesar Romero and Joseph Cotton. So I had a big time Hollywood lawyer who would negotiate for me.”

Basil leaned back and laughed while the lesson soaked in. This man who was wearing an Executive Badge to AFM was not pitching a web series or looking for a distribution deal. Basil was making the rounds. Taking meetings and imparting wisdom.  Basil left them better than he found them, extolling the virtues that were all about believing in yourself and not following the rules.

We were Googling “Basil Hoffman,” and someone found a post where Robert Redford called Basil “his favorite actor,” and wrote “it’s a wonderful thing to trust an actor so completely.” We were about to find out what he meant.

“So I get this role in ‘All The President’s Men.’ Every day that we worked in that film was a real day in history. We would have an edition of the Washington Post from the following day tacked up on the walls of the set. So we knew where our characters were in the story, and even where we sat — according to where our desks were. So I read a piece saying my character fought for something in a budget meeting at the Washington Post. I came up with some dialogue, director Alan Pakula loved it, and we shot it.”

Basil continued his recollection. “About two weeks later, Redford is walking by my desk on the Washington Post set, and he says ‘Basil, did you get my note?’ And I said ‘No, Bob, I didn’t.’ I must have had a very distressed look on my face. Alan noticed this and said, ‘Well, don’t worry, you’re not fired.’

“That night, I had a hand-written note from Redford, saying that my work in the Budget Meeting scene was ‘real good and contributed to the tone of the film,'” he continued. “About a week later, Alan Pakula comes to me and tells me that Bob wasn’t happy with his scene where Bob Woodward is on the phone with Kenneth Dahlberg, and they had to reshoot it. ‘Bob thinks you’re a good actor and he wants you to play Dahlberg on the phone.’ So I did, and I’m also Kenneth Dahlberg in the film.”

Also Read: Robert Redford To Retire From Acting: 'Goodbye To All That'

Since “All The President’s Men,” Robert Redford has requested Basil for “The Electric Horseman,” “The Milagro Beanfield War” and “Ordinary People.” The actor who hit town with a dream and no representation, has since worked with classic directors like Peter Bogdanovich, Carl Reiner, Richard Benjamin, Oscar winners Stanley Donen, Delbert Mann, Steven Spielberg, Ron Howard, Blake Edwards Sydney Pollack, Michel Hazanavicius, Paolo Sorrentino, the Coen brothers, and of course, Redford.

Basil still doesn’t have an agent. He does have a manager, Brad Lemack who, according to Basil “does everything that an agent can do, except stand in the way of my career.” His book “Acting and How to Be Good at It” has a forward written by Sydney Pollack where he noted that ‘Basil Hoffman writes about acting in a practical, clear way, without mumbo-jumbo or mystique.’

Those of us who sat with Basil came away from our encounter a bit more savvy, and extremely appreciative for the wisdom that was imparted by an actor who is “busier now than he ever has been before.”

As Yoda would say: “Always pass on what you have learned.”

"Jackie" director Pablo Larrian called Natalie Portman, "our queen," while introducing the feature at AFI on Nov. 14. A tremendously pregnant Portman posed with the twins who play "Jon-Jon," Aiden and Brody Weinberg.