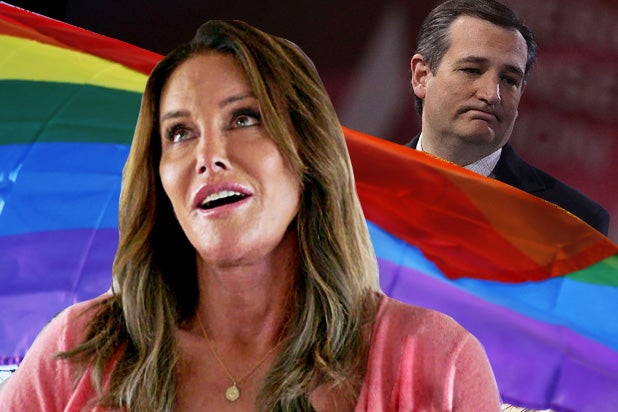 When she first came out to Diane Sawyer in April 2015, Caitlyn Jenner became the toast of LGBT Hollywood. Close to 17 million people tuned in to watch her ABC exclusive, seen as a turning point for the transgender community.

But, within less than a year, Jenner has gone from transgender poster girl to a thorn in the backside of the LGBT community.

While some activists, including Tur, expressed concerns about Jenner’s ability to become a positive spokesperson for the community early on, an acute anti-Jenner sentiment is now boiling over, expanding beyond those who work in advocacy.

“I’m definitely seeing a growing frustration within the LGBT community with Caitlyn’s positions and actions,” trans activist Sarah McBride told TheWrap. “Her most recent comments about Ted Cruz were, for a lot of people, the last straw.”

Also Read: Caitlyn Jenner 'Likes' Ted Cruz But the Feeling May Not Be Mutual

Earlier this month, Jenner voiced support for Texas Sen. Ted Cruz in an interview with The Advocate, telling the magazine she “liked” Cruz — the same candidate who told a conservative radio host in November that allowing “boys, with all the God-given equipment of boys” to share a shower room with girls was “lunacy.”

Jenner, a self-described Republican, called Cruz a “very conservative and a great constitutionalist and a very articulate man.” She even offered to become Cruz’s “trans ambassador” (incidentally, when TheWrap called the Cruz campaign to see how the candidate felt about the offer, the response was a swift “No comment”).

In a preview of this Sunday’s episode of her E! reality series “I Am Cait,” Jenner also defended GOP frontrunner Donald Trump, saying, “I think he would be very good for women’s issues.”

But support for conservative politicians like Trump and Cruz has raised eyebrows among many in the trans community. “[Jenner] has expressed on the show that she’s concerned about the national debt,” McBride said. “But Ted Cruz isn’t the anti-deficit candidate, he’s the anti-LGBT candidate.”

LGBT advocates had high hopes that Jenner’s public transition would finally shine a much-needed light on the “T” section of their community, often ignored and overlooked even by their gay peers.

When Jenner made a surprise appearance during a gay Pride event in New York City last June, she was greeted with fanfare reserved for staunch and longtime allies such as Lady Gaga.

But all that goodwill and excitement seem to have evaporated into thin air — as has Jenner’s mainstream popularity. Sunday’s episode of  “I Am Cait” drew 745,000 viewers and a 0.3 rating among adults 18-49, down more than 500,000 from the Season 1 finale, and nearly 2 million down from the series premiere.

Moreover, many in the trans community believe Jenner is out of touch with the everyday struggles of most trans people, the vast majority of them have less money, fame or public support. Others resent the fact that she hasn’t taken the time to understand the basic issues facing trans people, or a knowledge of the community. On a Season 1 episode of “I Am Cait,” Jenner confessed to not knowing the meaning of “HRC,” the acronym for the largest LGBT organization in the country, the Human Rights Campaign.

“Caitlyn has eroded a lot of the enthusiasm that the LGBT community at large had for her as she was coming out,” LGBT activist Danielle Moodie-Mills told TheWrap. “I find it very disappointing that through ‘I Am Cait’ and her conversations with less advantaged trans people there hasn’t been a cultural shift in her understanding of the movement.”

On Sunday’s Season 2 premiere episode, Jenner raised eyebrows yet again when she told her posse, “If we are unfortunate enough to get Hillary [Clinton] as our next president, we need her on our side. But she won’t be,” adding that Clinton “couldn’t care less about women, she only cares about herself.”

Jenner then doubled down, saying, “Sometimes, these girls think that now that I have transitioned that everything has to change. You can’t be conservative anymore, you have to be a liberal. No, I don’t believe that.”

The comment further alienated some members of the trans community, who saw it as a sign that perhaps Jenner is not in tune with their ongoing battle for equality and recognition.

“Bruce Jenner was just a conservative nut job and cute to have around,” Tur said. “Now, that she’s transitioned many believe that she should somehow be smarter.”

There were signs from the beginning that Jenner might not be the perfect role model for the trans community. During her Diane Sawyer interview, she talked about being a Republican, an unusual affiliation among transgender people in the U.S.

And in September, she shocked many in the gay community when she told Ellen DeGeneres that she’s a traditionalist on many issues but that if the word “marriage” is that important to those fighting for marriage equality, she “can go with it.”

Not surprisingly, that didn’t sit well with many in the LGBT community.

The shift in attitude towards Jenner became noticeable last November, when protesters confronted her outside a speaking engagement in Chicago and called her “an insult to trans people” and “an insult to women.”

Still, some trans leaders believe Jenner has done more good than bad. “She’s been a net positive,” Mara Kiesling, executive director of the National Center for Transgender Equality, told TheWrap. “I don’t agree with everything she’s saying … but for a lot of people she’s a real inspiration and she’s gotten the media to focus on trans issues.”

Others note that expectations may have been too high on Jenner. “While her prominence as a celebrity cannot be understated by any stretch, people have realized that they cannot pin their hopes and dreams for equality to one person,” Moodie-Mills said.

Caitlyn was born Bruce Jenner was born on October 28, 1949 in Mount Kisco, New York. She earned a football scholarship to Graceland College, but a knee injury stopped her from pursuing it. Then, she veered towards decathlon and graduated in 1973 with a degree in physical education.