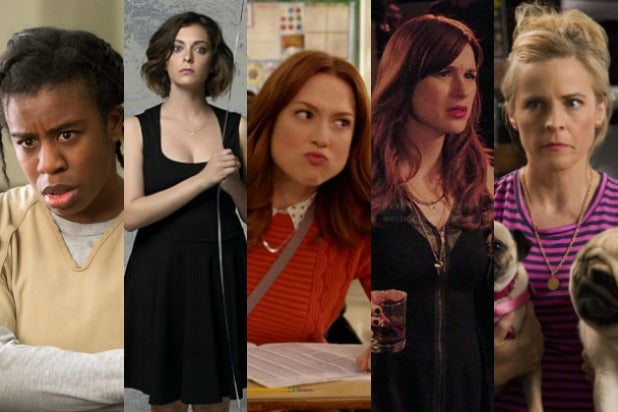 These kinds of mental illnesses may not seem like the stuff of TV comedies — once, they might have been addressed with insensitive one-liners, if at all. But thanks to the rise of streaming and serialized storylines, shows like Netflix’s “Orange Is the New Black” and the CW’s “Crazy Ex-Girlfriend” now have time to explore once-stigmatized problems with not just humor, but empathy.

“We can see people who have mental health issues on all levels of the spectrum and understand them with their complexities without having to dumb it down,” says Dr. Paul Puri, a psychiatrist who also writes TV pilots and serves as a technical consultant on TV shows.

They may use the word “crazy,” but they recognize that their characters’ struggles are much deeper.

The latest season of “Orange is the New Black,” for example, tells us about the pasts and neuroses of Suzanne “Crazy Eyes” Warren (Uzo Aduba) and Lolly Whitehill (Lori Petty). Instead of “dumbing down” mental illness, Puri says, “Orange” gets “past the idea that people who are mentally ill or ‘crazy’ are doing things that are purely lacking logic or are unpredictable and dangerous.”

When Rachel Bloom was creating her Golden Globe-winning musical comedy “Crazy Ex-Girlfriend,” she turned to her own life. In the show, depressed New York lawyer Rebecca Bunch (Bloom) impulsively moves to West Covina, California to be with her summer camp crush Josh Chan (Vincent Rodriguez III).

“Rebecca is 80 percent autobiographical,” Bloom said in an email to TheWrap, “so a lot of Rebecca’s depression, insomnia, and anxiety is based on myself at my worst points throughout my life.”

She says the show has drawn from “depression, anxiety, and personality disorders,” experienced by her and the show’s other writers.

“I’ve also done extensive research on the subject of mental illness through reading various articles and books and talking to my personal psychiatrist about the root causes of anxiety and depression,” she said.

That research is apparent in the first season of the show. But because the series is a comedy, Bloom’s character expresses her anxieties not just through panic attacks and denial, but also song-and-dance.

Puri said that approach helps make Rachel’s experience more relatable, “in a way where you can continue to follow her as a character.”

On Netflix’s “Lady Dynamite,” star and creator Maria Bamford plays a more theatrical version of herself, a comedic actress who has bipolar disorder. Netflix’s “Unbreakable Kimmy Schmidt walks a finer line: the titular heroine (Ellie Kemper) is upbeat, colorful, and slightly naive, giving us only occasional, frightening glimpses of the trauma she faces after being held captive in a bunker for 15 years.

“I think what ‘Unbreakable Kimmy Schmidt’ does well — and what most depictions of PTSD don’t do — is it portrays a character whose defining characteristic is not the fact that she struggles with PTSD,” says Jenny Jaffe, the founder of Project UROK, a non-profit organization that works to de-stigmatize mental illness.

FX’s “You’re the Worst,” meanwhile, addresses misconceptions about clinical depression, by showing how not to address it. The start of the show’s second season found snarky music publicist Gretchen (Aya Cash) relapsing into depression, and her arrogant writer boyfriend Jimmy (Chris Geere) trying to get her out of her “funk” by taking her to fun places and telling her to “be happy.” He finally learns it isn’t that simple.

Other shows that have made notable representations of people with mental illnesses include HBO’s “Girls,” Netflix’s “BoJack Horseman,” and CBS’ “Mom.” They follow in the footsteps of now-departed shows like Showtime’s “United States of Tara” and USA’s “Monk.”

But for some, not every show handles mental illness responsibly. Caitlin Lansing of About-Face.org posted an article in 2014 criticizing the portrayal of eating disorders in the first season of Freeform’s “Pretty Little Liars.” Puri said that Fox’s “Scream Queens” also plays into mental illness stigmas for “the purposes of flash and spectacle.”

How mental illness is portrayed is important because the stories we watch influence our emotional responses. “Rather than have it be something that’s only heavy or weighty,” he continues, “comedy lightens the mood about it and allows us to be able to laugh at anything.”

As for the next steps in accurately representing mental health issues on TV, Dr. Puri believes that television shows should neither “give false information” nor “perpetuate myths,” and instead “portray these problems as complex, not just one thing.” Bloom said writers and comedians should recognize that talking about mental illness”isn’t a throwaway thing.”